Berlin to Compensate Former Ghetto Workers | Germany| News and in-depth reporting from Berlin and beyond | DW | 20.09.2007

The German government announced it would pay compensation to some 50,000 workers in Nazi Germany's Jewish ghettos who previously failed to qualify for payouts from a fund for former slave laborers.

Will the former ghetto survivors be happy with a humanitarian gesture?

Government spokesman Ulrich Wilhelm said on Wednesday, Sept 19, that Chancellor Angela Merkel's cabinet had approved a Finance Ministry plan to award one-off payments of 2,000 euros ($2,789) to those who have not yet received compensation from the Holocaust Memorial Fund.

"The payment agreed today is not compensation for being interned in ghettos ... it is a humanitarian gesture," Wilhelm told reporters in Berlin, stressing that it was aimed at people who did not receive compensation from a separate settlement created in 2000 that had paid out a total of 4.4 billion euros to survivors of the Nazis' forced labor programs.

With Merkel eager to reach a settlement as soon as possible, the announcement comes after weeks of discussion between German Finance Ministry officials and Israel's Pensioners Affairs Minister Rafi Eitan.

Germany allegedly wanted to pay some 700 euros per person less, but Israel insisted the offer was too low.

A drawn out process 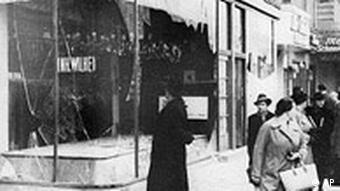 The decision will apply to some 50,000 ghetto survivors

Compensation for ghetto workers, whose wages would have been negligible, is one of the last outstanding compensation claims dating back to Hitler's Third Reich.

The issue has long been the subject of negotiations with the New York-based Jewish Claims Conference, which obtains compensation for Holocaust survivors.

In Germany, the setting up of the fund to compensate slave laborers was overshadowed by legal wrangling about contributions from companies which profited from the Nazis' labor policies during the Third Reich.

Former slave laborers and their surviving relatives in over 100 countries received payouts from that fund, whose administrators announced in July that they had completed their task.

In 2002, the German parliament passed a law to grant the ghetto survivors a small pension, but the plan failed due to bureaucratic difficulties processing the claims.

The Finance Ministry said the government estimated there were still around 50,000 people eligible to claim the payment.

"The aim is to get the payment to the elderly applicants as quickly and as unbureaucratically as possible," the ministry said, advising that applications could be made immediately to Germany's Federal Office for Central Services and Unresolved Property Issues in Bonn.

Do you think Berlin has done enough for former slave laborers? Send us an e-mail. Please include your name and country in your reply.

For information on making applications