Tens of thousands of bees brought traffic in a busy street in Berlin's Neukölln district to a stop. Local beekeepers intervened within minutes of police responding to the scene. 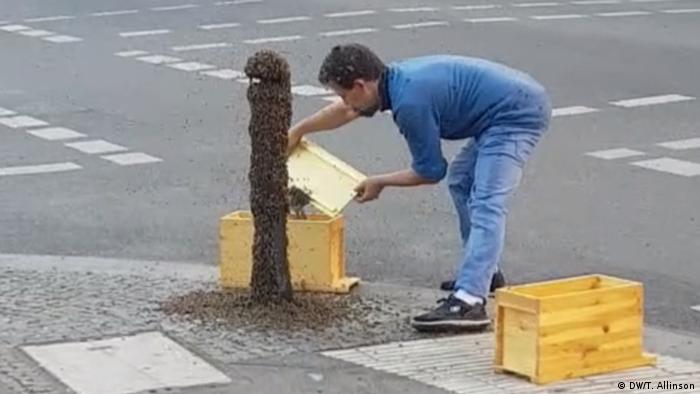 A swarm of some 30,000 bees briefly took up residence on the corner of a busy Berlin street Saturday.

After it took only 10 minutes for the swarm to form, police called a nearby beekeeper to relocate them.

Beekeeper Arezki Kedam told DW it might have been an unusual choice for their new home but that honeybees regularly divide their colonies around the warmer days in May and find a new spot to set up.

Around two thirds of the colony follow the old queen as she leaves a newborn queen to continue the existing hive, Kedam said.

Kedam and a colleague sprayed the bees with water before calmly scooping them into a box as pedestrians dashed past the stingers.

Kedam said the 30,000 to 50,000 bees he collected had likely come from a hive kept at one of the nearby flats in the built up neighborhood of Neukölln.

The policeman who contacted the beekeepers said it was his first bee swarm case.