Berlin plans airlift for wounded Libyans | Germany| News and in-depth reporting from Berlin and beyond | DW | 08.10.2011

Germany intends to step up its assistance in Libya by offering visas for medical treatment to those wounded in the civil war. The visas are to be issued with minimal bureaucracy, according to German officials. 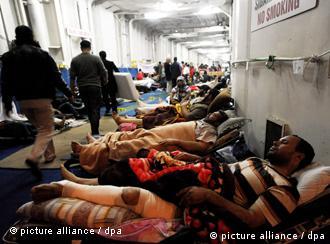 The Libyan civil war has taken a heavy human toll

Berlin plans to implement a humanitarian airlift that would provide Libyans, who were severely wounded during the uprising against Moammar Gadhafi, with access to treatment in German hospitals.

"We are working with our Libyan partners to create the conditions for this (airlift) as quickly as possible," a spokesperson for the German Foreign Ministry said.

A medical team from the German military arrived in the Tunisian city of Tunis on Tuesday, according to the Foreign Ministry. The German government is currently in discussions with the National Transitional Council (NTC) about how many Libyans need treatment.

The German embassies in Tunis and the Egyptian capital, Cairo, have been instructed to issue visas as quickly as possible for the wounded. In pressing cases, Berlin's recently reopened embassy in the Libyan capital, Tripoli, would also handle visa cases.

Berlin's goal is to issue "visas for the wounded quickly and with little bureaucracy," making Germany the only country in Tripoli issuing visas for the 25-nation Schengen area in Europe, according to the Foreign Ministry.

The NTC has said that in Tunisia alone there are 2,000 badly wounded Libyans who need treatment. In total, the transitional government estimates that 30,000 people have died in Libya's civil war and 50,000 have been wounded.

Libya's new leaders hope that a final all-out offensive in Sirte will bring down the key Gadhafi stronghold after months of fighting. US military sources say revolutionary forces are on the verge of victory. (08.10.2011)

Thousands of people were reported to be fleeing Sirte, the hometown of deposed Libyan leader Moammar Gadhafi. The battle for the town had intensified, and the city's hospital was struggling to cope. (03.10.2011)

The remains of prisoners massacred at the infamous Abu Salim prison have been found, according to Libyan authorities. Libya's interim government has called on the international community to help identify the victims. (25.09.2011)