He's not quite Superman, but a genetic mutation has given a Berlin five-year-old muscles twice the size of other kids his age and about half the body fat. 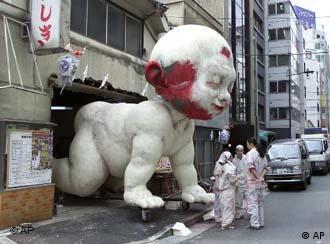 Will Berlin's Superbaby grow up to destroy Tokyo? Probably not.

He doesn't look like The Incredible Hulk or a pumped up Arnold Schwarzenegger, but a Berlin tyke can perform unusual feats of strength for his tender years, such as lifting three kilo (6.6 lb.) weights, according to Dr. Markus Schülke, a child neurologist who has been studying the boy since his birth.

"He's a normal boy - you don't see it, you wouldn't recognize him" out of a crowd, Schülke said. "He can just lift heavy things."

The boy, whose name is being kept private, was brought to Berlin's Charité hospital shortly after his birth because of muscle twitching. But Schülke found nothing abnormal, although he did notice the child was particularly muscular.

Turns out, the Superboy has a genetic mutation that blocks the production of a protein that limits muscle growth. It's the first known case of a human having such a mutation.

Schükle has published his findings in the New England Journal of Medicine, saying the discovery might aid in the fight against muscle-wasting diseases such as muscular dystrophy.

Although the buffed baby can thank a mutation for much of his added strength, muscularity seems to run in the boy's family. His mother is a former sprinter; her brother and other relatives are also very strong.