Berlin hotels open their doors to homeless during pandemic | Germany| News and in-depth reporting from Berlin and beyond | DW | 16.02.2021

COVID-19: Opening hotels for the homeless

Bringing the homeless in from the cold

Christian is smiling as he steps through the door into his hotel room. He puts his backpack down, takes his jacket off and sits down on the bed. He already feels at home in the Pension Reiter in Berlin's Friedrichshain district.

Since November, people experiencing homelessness have been permitted to stay in the hotel for the night. Christian, who does not want to give his full name, has been living on the street for several years. "For the past few days I slept in a dumpster, that was okay for me," he says. "But this is much better."

Social distancing in the shelter

In the past, he used to spend winter nights in a shelter run by the Catholic Church. It provides 40 beds for homeless men. But this winter, things were different, says Wolfgang Willsch, who runs the shelter. They had to reduce the number of beds by half, to comply with social distancing requirements in the pandemic.

It was no longer possible to have several men share a small room or sleep on mats on the floor in the large assembly hall.

Wolfgang Willsch managed to find a solution: "We are very grateful that the Pension Reiter has offered to help. That means we never have to have more than two or three people sharing a room," he says. 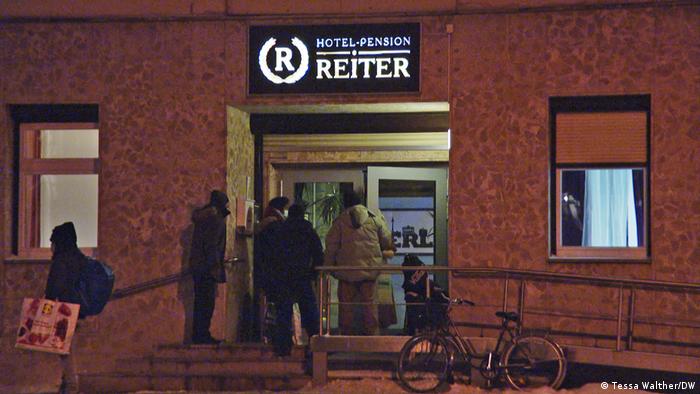 Pension Reiter is one of several Berlin hotels taking part in this project to help people experiencing homelessness. And there is a benefit for them, too: The city government pays a small compensation for the beds — badly needed income at a time when tourism and business travel are still all but impossible in Germany.

Over the past few days, it has become apparent just how vital shelters are for people experiencing homelessness in wintertime: Temperatures plummeted well below -15 degrees Celsius (5 degrees Fahrenheit), which makes sleeping on the street a deadly risk. So Berlin charities stepped up their efforts to get hotels to open their doors to people in need and managed to secure a total of 1,426 beds — the most ever, said Stefan Strass, spokesman for Berlin's social services.

Many of the hotels provide more than just a bed: They serve breakfast in the morning and a warm meal at night. That is even more important now, as homeless people have few means of making money; the downtown areas are empty and people are taking care to keep a distance. Still, Christian sets off every day trying to sell the newspaper for the homeless — more often than not, without success. 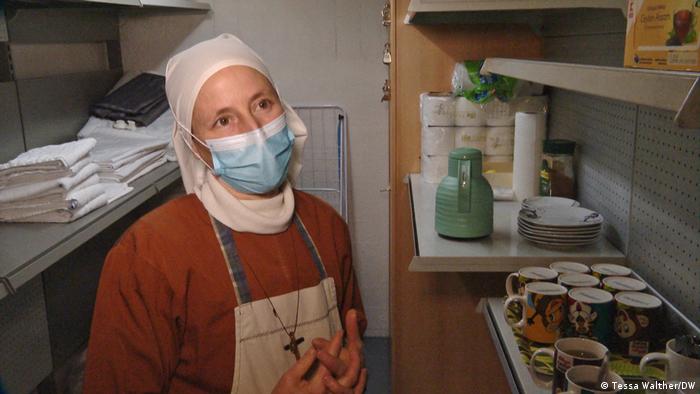 In the basement of the Pension Reiter there is a common room. "No Smoking" reads a sign on the door. A note with "Smokers' Room" has been pasted over it. Christian is sitting at one of the wooden tables. The sparsely furnished room is stuffy. In the harsh neon light, a scar right across Christian's face is very noticeable. Sister Martha Arnould brings him a cup of tea, saying: "Two sugars for you, as usual," as she sets it down.

Sister Arnould works with the shelter for people experiencing homelessness. But her main job is to lend an ear and offer assistance. The hotel beds are a big help, she says. The homeless men have the security of being able to spend the night indoors in a proper bed every night — if they abide by the rules.

"When the men come they are exhausted and dirty, suffering from depression and having given up all hope," Sister Arnould says. "But, after a few weeks, things are completely different. They reach a point where we can sit down and make plans for the future," she says, pointing out that some find jobs and rent apartments. "They have a chance at a better life," she adds with a smile.

A home of his own, that's what Christian wants for himself, too. He has managed to save a bit of money and is planning to return to his home country, Romania. "Maybe this summer, when the coronavirus crisis is over," he says, as he sips his hot tea. Until then, he knows he has found a place where he is safe and protected from the cold.

Bringing the homeless in from the cold