Berlin hosts show of support for Badawi | Germany| News and in-depth reporting from Berlin and beyond | DW | 08.01.2016 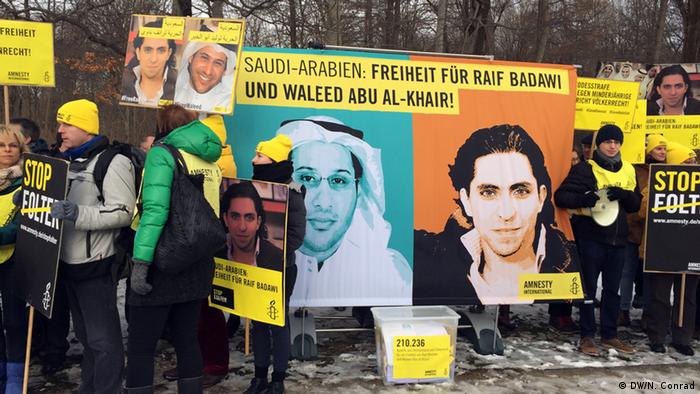 As the group of demonstrators clutching their posters and banners gathered in the icy slush outside the imposing Saudi embassy towering behind its massive fence in central Berlin, a taxi driver slowed down. Honking his horn, he smiled broadly and gave an enthusiastic thumbs-up.

The demonstrators, many sporting matching bright yellow woolly hats, had gathered to demand the release of Raif Badawi, a prominent Saudi blogger and human rights advocate who has been imprisoned since 2012.

The blogger had angered the kingdom, which adheres to a particularly conservative interpretation of Islam, with his advocacy of free speech and freedom of religion. A first court ruling handed down the death penalty on charges of apostasy and insulting Islam. However, in later court cases, the apostasy charge was dropped and the sentence was reduced to 10 years in prison and 1,000 lashes.

Human rights activists have repeatedly criticized Saudi Arabia's legal system. A recent report by Human Rights Watch documents "longstanding due process violations in Saudi Arabia's criminal justice system that make it difficult for a defendant to get a fair trial."

In January 2015, almost exactly a year ago, the now 31 year-old, who has received numerous human rights awards since his detention, received his first 50 lashes, prompting international condemnation and a suspension of the lashing. 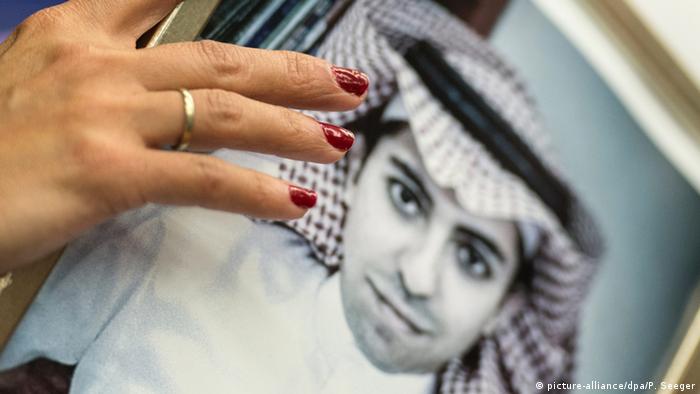 But the "cruel punishment can be resumed at any time," Michael Rediske from Reporters without Border's Berlin office told protesters, his voice crackling from the tinny loudspeakers.

Badawi's wife, Ensaf Haidar, who has been campaigning on behalf of her husband, told DW in an interview broadcast on Friday that she has been unable to contact her husband since he was moved to a different prison some three weeks ago: "All channels of communication have been cut off completely."

She was afraid, she continued, that her husband's physical condition was deteriorating. According to Haidar, who was granted asylum in Canada with the couple's three children, her husband began a hunger strike in early December.

Badawi not an isolated case

But demonstrators emphasized that Badawi was not an isolated case: According to Rediske, at least two journalists and seven bloggers are currently behind bars in Saudi Arabia.

Ruth Jüttner, Amnesty International's Middle East expert, also pointed to the recent mass execution of 47 people, including that of a prominent Shia cleric Nimr al-Nimr, which has led to a souring of already fraught relations between Saudi Arabia and Iran. This follows a record 158 executions in 2015.

The activists called on Saudi Arabia to immediately end all death penalties and for politicians to use all available channels to exert pressure on the kingdom. In the past, German authorities, who consider Saudi Arabia a key partner in the region, have been careful with outright criticism.

One of them puffed on his cigarette and grinned. Then he shrugged and turned back to the embassy.

Raif Badawi has started a hunger strike protesting against new prison conditions, according to his wife. Ensaf Haidar said her husband has been on strike since Tuesday; she pleaded for him to be pardoned. (11.12.2015)