Berlin has eyes on upcoming NRW state election | Germany | News and in-depth reporting from Berlin and beyond | DW | 11.05.2012

State elections in North Rhine-Westphalia (NRW) have always been a good indicator of what's to come at general elections. It's Germany's largest state and holds significant political sway in Berlin - at federal level. 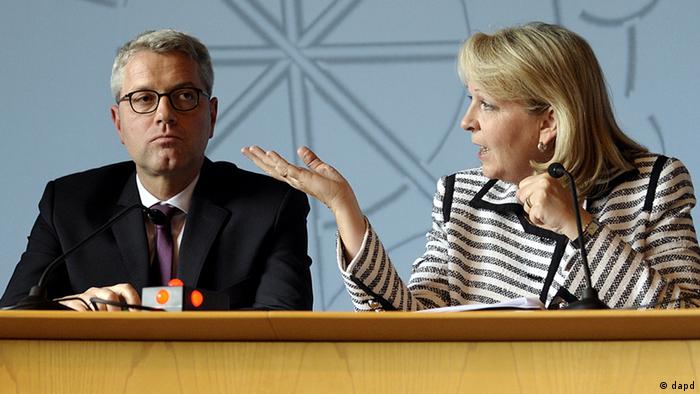 Norbert Röttgen wants to become the next state minister of North Rhine Westphalia, and he has the backing of Chancellor Angela Merkel who in turn is popular among Germans. To have this chancellor bonus should be an advantage - but this is not the case for Röttgen. The man whom political opponents ridicule as "Mommy's brightest" has been his own worst enemy for weeks. 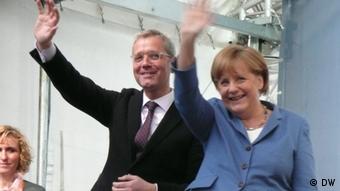 The current and future chancellor of Germany?

Röttgen has made no bones about his political ambition to follow in Merkel's footsteps in the long run. And against this backdrop the state elections in NRW clash with his federal career plans. If elected state minister his political standing would grow within the conservative party, but it appears that he won't be satisfied with the role of leading the opposition in Düsseldorf - should he lose this weekend's election and remain outside the NRW state government.

Although he has not actually stated this explicitly, his party believes he may jump ship and head to Berlin rather than settle for the less prestigious role of opposition leader in NRW. From the outset of the campaign, Röttgen - who is said to be gifted with considerable intellectual and political skills - has been fighting a losing battle.

The pundits say he is unlikely to garner enough votes if he fails to commit unreservedly to NRW. It appears that all is already done and dusted for the Christian Demokrats (CDU) and for Angela Merkel.

Hannelore Kraft and the 'Stones' 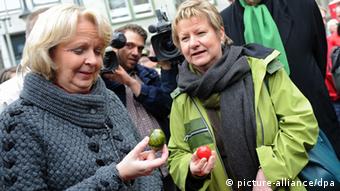 The outcome of the NRW elections may also have ramifications for the Social Democrats (SPD) in Berlin. Hannelore Kraft, who for a long time took a backseat at federal level, has sharpened her profile as state minister of a minority government. Shortly before the election, pollsters were giving the SPD a strong lead over the CDU.

Kraft, who is considered a motherly figure, is faring even better in direct comparison with Röttgen. If this trend is confirmed in Sunday's poll, it could also be time for the SPD to reshuffle the cards in Berlin.

The list of potential candidates for the job of chancellor includes SPD party chairman Sigmar Gabriel, former finance minister Peer Steinbrück and the former foreign minister Frank-Walter Steinmeier, with the latter two both having served under Chancellor Angela Merkel in a grand coalition of CDU and SPD until 2009.

The two former ministers have a solid reputation and are referred to as the "Stones" in SPD party circles - a reference to the German word "Stein" which forms part of their surnames. However, Hannelore Kraft might well join the ranks of potential candidates if she pulls off a convincing victory in NRW.

'Bambi' - savior of the Liberal Democats? 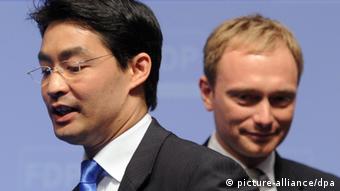 Lindner's success could be Rösler's downfall

Nowhere are the federal ramifications of this weekend's poll more apparent than with the business-friendly Liberal Democrats (FDP). For decades the FDP have served as a junior coalition partner for the country's two main parties, SPD and CDU.

Depending on the election outcome and coalition terms, they either opted for the SPD or CDU. Although they usually won no more than five to eight percent of the vote, they always gained a disproportionately high number of coveted cabinet positions in the respective governments.

But with the FDP's support plummeting to an insignificant two percent federally they've already lost a series of state elections. The recent vote in Schleswig-Holstein stopped this downward spiral - at least for the time being. Experts are convinced the Liberals only managed to enter parliament in the northern state because they distanced themselves from the FDP leadership in Berlin before the poll. 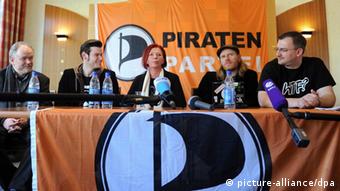 The Pirates' success story is set to continue in NRW

Christian Lindner, the former FDP secretary general who briefly withdrew to local politics after a falling out with the party's federal leadership, is running against Kraft and Röttgen in NRW. Lindner, who is often called "Bambi" because he was only 22 when he won a seat in the NRW parliament, is popular and considered extremely bright. If he manages to gain more than seven or eight percent for the FDP on Sunday, Philip Rösler's days as party chairman are more than likely numbered.

Both share a deep and thinly veiled dislike of each other, nurtured by conflicting political views. A good showing on Sunday could well alter the FDP's political framework at a federal level. It remains to be seen whether such a shakeup would stabilize the CDU-FDP coalition in Berlin.

Pirates ready to board NRW

It's almost certain the Pirate Party will be represented in the new state parliament in Düsseldorf. Experts are still struggling to comprehend how a party with such a scant manifesto was able to mobilize so many voters in such a short time. Fact is the Pirates are shaking up Germany's party landscape - similar to the Greens in the 1970s.

If the Left Party also manages to grab some seats in Sunday's elections, NRW is set for a six-party parliament - a scenario that's already being played out in various party headquarters in Berlin ahead of general elections next year.

Opinion: Room to breathe for Merkel

At first glance, Germany's governing parties headed by Angela Merkel lost in state elections in Schleswig-Holstein. But the result serves to strengthen the chancellor in Germany and in Europe, says DW's Peter Stützle. (06.05.2012)

Voters in the North German state of Schleswig-Holstein have chosen a new parliament. The Pirate Party has won seats for the first time, while the embattled Free Democrats have fared better than expected. (06.05.2012)

Exit polls, conducted after voting ended in the northern state of Schleswig-Holstein, say Merkel's CDU is neck-and-neck with the opposition Social Democrats. It is a victory of sorts for the CDU. (06.05.2012)