Prominent actors, authors and journalists gathered in Berlin to protest the imprisonment of journalist Deniz Yücel. They called on Turkey to release him, but are also sending a message to populists in Europe. 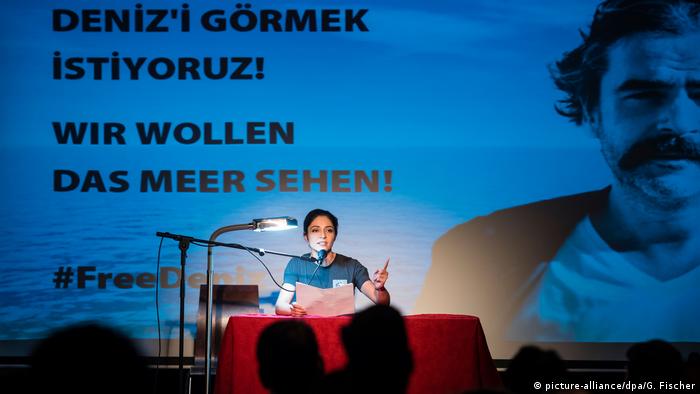 Hundreds of people came Wednesday evening, cramming themselves into the venue in Berlin's Kreuzberg neighborhood to demonstrate their solidarity with German-Turkish journalist Deniz Yücel, who has been in prison in Turkey since mid-February - along with 150 other journalists.

'We want to see the sea'

A photo of Deniz Yücel was projected onto the stage, together with the words "We want to see the sea" - a play on Yücel's first name, which means "sea."

The speakers read aloud texts by the imprisoned journalist, who wrote from Turkey for German publications like "Jungle World," "taz" and, most recently, the daily "Die Welt." 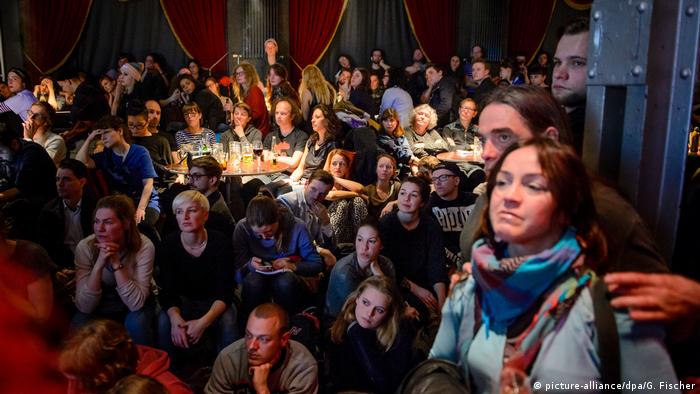 A number of Deniz Yücel's texts were read aloud

Just one of the texts had not been written by Yücel: "taz" author Doris Akrap recited the protocol from Yücel's hearing, during which he was accused of incitement to hatred and spreading terrorist propaganda.

The texts transported the audience to a group of German men with an ambivalent relationship to women's soccer, to the foreigners' bureau, to a demonstration by anti-immigrant group PEGIDA, and to the Gezi protest movement in Turkey back in summer 2013.

They also shed light on Yücel's inner thoughts, revealing him as someone searching for his identity while shaking up other people's supposedly straightforward identities. Yücel was presented as a passionate journalist who has the ability to pithily expose both German and Turkish peculiarities.

Emcee Michel Friedman also read a text. In response to Turkish President Erdogan's recent comparison of present-day Germany to the Nazi regime, Friedman commented, "Germany is anything but that." Because of its history, Germany bears a responsibility to get involved when freedoms are restricted, he added.

In defense of freedom of speech

Actress Pegah Ferydoni said she was concerned by the rise of populism in Europe. For her, the show of solidarity Wednesday evening didn't only send a message to Turkey. "We are also defending our freedom here. Many people forget the preconditions for our life together here," she said. 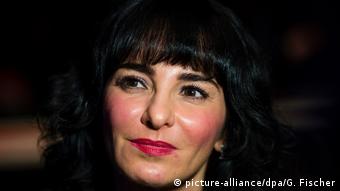 Author and journalist Mely Kiyak at the Yücel solidarity event

For the author and journalist Mely Kiyak, solidarity is more than just sending a message to those in power. "With our solidarity, we are sending a signal above all to the relatives of those who are imprisoned  - who feel like they are imprisoned, too," said Kiyak. "It's a signal back to the population, to show that we are here as artists and as people with political opinions."

She added that even in Europe, freedom of speech is being restricted, pointing to recent developments in Poland and Hungary.

It's still unclear what will happen with Deniz Yücel. In the case of Turkish author Asli Erdogan, who has been in custody while awaiting trial and was freed on bail until her sentence, the public prosecutors are calling for life in prison. Her alleged crime: terrorist propaganda.

As Yücel himself wrote in one of his texts: "Turkey is a crazy country." Anything can happen.

Turkey's detention of German-Turkish journalist Deniz Yucel has led to a deterioration of already badly frayed German-Turkish relations. DW spoke to his best friend, Doris Akrap, who has been campaigning for his release. (10.03.2017)

The recent arrest in Turkey of German reporter Deniz Yucel is not unique. While Turkey's constitution guarantees press freedom, a slew of other laws are turning it into one of the world's worst places for journalists. (01.03.2017)