Belgian prosecutors suspect the pair of planning a New Year attack on the capital. The prosecutor's office said the investigation revealed "the threat of serious attacks that would target several emblematic places." 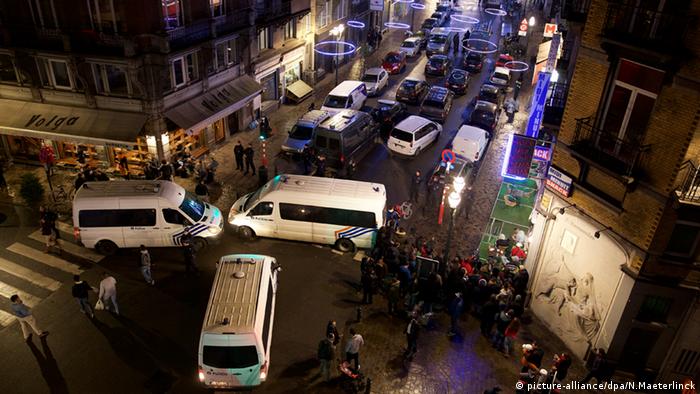 Two suspects were arrested following searches in the cities of Brussels and Liege as well as the province of Flemish Brabant, the federal prosecutor's office said. They were alleged to have been plotting a terror attack on Brussels most likely on New Year's Eve.

The investigation revealed "the threat of serious attacks that would target several emblematic places in Brussels and be committed during the end-of-year holidays," the prosecutor's office said.

During searches, police found military-type training uniforms, propaganda materials from the self-styled "Islamic State" group (IS) and computer material. No weapons or explosives were found. Six people were initially taken in for questioning in total, four of whom were released.

'No links' to Paris

The prosecutor's office added that the probe was not connected to the November 13 attacks in Paris. The presumed ringleader Abdelhamid Abaaoud and fugitive Salah Abdeslam had connections to the Brussels suburb of Molenbeek - a hotspot of Islamist activity.

Two of the Paris suicide bombers, Brahim Abdeslam and Bilal Hadfi, had been living in Belgium prior to the attacks. Belgian police have arrested a total of nine people in connection with the Paris attacks.

Brussels was put on maximum security alert in the wake of the Paris attacks for nearly a week, severely impacting public transport, schools and other services.

Authorities in Austria's capital Vienna had shared information last week about intelligence that suggested an imminent terror attack in Europe.