Belarusian IT specialists relocate to Poland | Business | Economy and finance news from a German perspective | DW | 07.04.2021

Belarusian IT specialists relocate to Poland

A Polish government program to assist Belarusian IT specialists in relocating to Poland has seen 790 Belarusians obtain visas. But the system leaves gaps in an otherwise burgeoning domestic IT ecosystem. 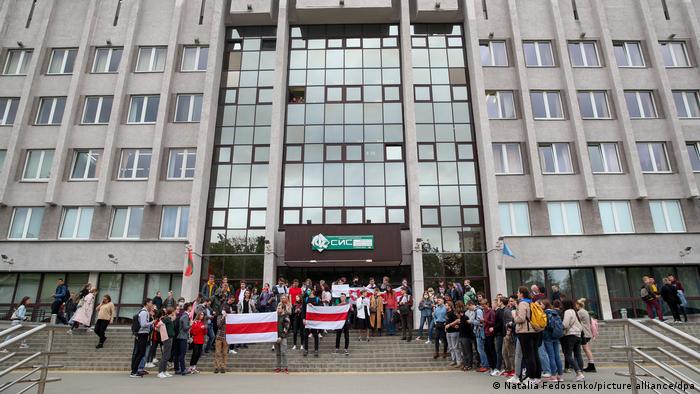 Poland's "Business Harbor" program — a government-backed assistance program for Belarusians aiming to relocate to Poland — has already brought tangible results after it was launched in September 2020. Visas had been issued to 790 Belarusian IT specialists, Monika Grzelak, a representative of the Polish Investment and Trade Agency (PAiH), told an online conference organized by the Polish Council for the IT Sector (SRKI) in November.

"We are providing IT specialists and their families, as well as owners and employees of companies with a special, accelerated, immigration track," a PAiH representative told DW. "Startups from Belarus receive special funding, and companies of all sizes are provided with a range of dedicated services required to ensure their smooth transition to the Polish business ecosystem," it reads.

Even Prime Minister Mateusz Morawiecki is involved, writing on Facebook that Poland is becoming "a safe haven for engineers, programmers, startups and IT companies from Belarus, especially active during protests and exposed to repression."

Nikolai Oreshkin, a Belarusian venture capitalist, described the exodus as a paradox.

"Intelligent people in IT with a good income from abroad, who replenish the treasury, were forced to leave the country," he told DW, adding: "The most successful people turned out to be the most proactive and defended the rights of the oppressed, and, for this, they get hit on the head with truncheons and are forced to live in fear or leave the country."

For Belarus, a missed opportunity

It was not meant to be thus when the Belarusian president, Alexander Lukashenko, unveiled his government's groundbreaking startup decree in December 2017, promising state incentives and tax breaks to tech founders in his country.

After ruling for 24 years, Lukashenko seemed to understand the need to diversify his country's economy. Minsk also signed the IT Decree 2.0 — a digital economy initiative designed to simplify business for tech companies — while also attracting international talent by relaxing work permit regulations. Belarus had already made a home for startups in its Hi-Tech Park, which was launched in 2006 and has developed into one of the biggest IT clusters in Central and Eastern Europe. The zone offers a special tax regime for IT companies.

According to a recent report by London-based think tank Emerging Europe, Belarus has emerged as an "IT powerhouse" over the past two decades. Salaries in the sector are 191% higher than average wages in the economy.

"With over 3.7 million individuals employed in the ICT sector, the country has almost twice as many as in Eastern Europe," the report says.

Though India is unarguably the largest player in the sector globally, Emerging Europe has calculated that the number of IT employees per 100,000 inhabitants is "four times higher" in Belarus.

The report's authors also say political repression, economic uncertainty and the prospects offered by an EU member state on its doorstep have seen many IT specialists cross the border to neighboring Poland.

For Poland, an opportunity

"We became interested in Belarus because it is a phenomenon in terms of IT, not only due to business but also political activities," Anna Kniaz, secretary of the Sectoral Competence Council IT, told the online conference.

"Belarus has for many years performed very well in all world rankings when it comes to IT competency resources, and undoubtedly, in some sense, it could be an example of how to educate IT specialists. It is a small country with less than 10 million inhabitants and educates four times more IT graduates than Poland," she added.

There are already about 2,600 Polish companies in which one of the shareholders is a Belarusian company or a person with Belarusian citizenship, according to international property consulting company CBRE.

"On the Polish IT market, we lack the most diverse programming competences [such as] programming skills based on scripting languages, Java environment or Microsoft.CSharp technologies. Generally speaking, we are able to absorb a lot of programmers in Poland," Przemyslaw Mikus, vice president of Software Development Association Poland, told the online conference.

"Belarus is much closer than, for example, India, so companies look more favorably at this direction of acquiring employees. Our region — I mean Poland, Ukraine and Belarus — is really the best in global rankings in terms of programming quality," he added.

Since December 1, Belarusians who entered Poland on humanitarian visas, as well as doctors, nurses and IT specialists entering the country under the Business Harbor program have been able to work without obtaining a permit.

PAiZ has created a team of experts especially for Belarusian entrepreneurs who help in the efficient relocation of business activities.

Belarusian workers are especially in demand in the health sector, since there are not enough doctors, nurses, and medical rescuers in some regions of Poland. Meanwhile, there is a shortage of doctors in Belarus.

Andrei Avsievich, co-founder of the Belarusian startup Bulba Ventures, notes that Belarus already had experienced a brain drain in the past decade. "But before 2020, IT workers and entrepreneurs were returning to Belarus to reinvest their earnings and knowledge, and that fuelled the ecosystem growth. I believe this will be paused now. Let's see for how long," he told DW.

He's skeptical about the idea that the exodus to Poland would speed up if Warsaw would drop visas and give tax preferences to IT workers.

"They temporary lowered the paperwork to get a Polish residence, but that’s it for now. Business Harbor works for the smallest companies, which are definitely not a majority of a sector," Avsievich says.