Belarus releases one of five opposition presidential candidates | Europe| News and current affairs from around the continent | DW | 04.01.2011

One of five opposition presidential candidates arrested in Belarus following a post-election crackdown two weeks ago has been released. Meanwhile, the country faces criticism for closing its OSCE office. 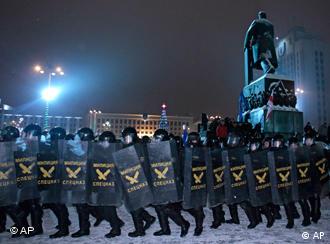 Rymashevsky was among hundreds arrested on election night

Belarus released one of five opposition presidential candidates who have been held since a crackdown on an election-night protest two weeks ago.

Vitaly Rymashevsky was released Monday after being arrested on December 19 and charged with organizing mass demonstrations. Incumbent President Alexander Lukashenko was declared the winner of the election but that result has been largely disputed by international observers who suspect election fraud. It is Lukashenko's fourth term as president.

In total, more than 600 people were arrested during the protest that took place on election night. Lukashenko has faced heavy criticism from the international community for the crackdown on the demonstrators.

Lukashenko's announcement that Belarus would close its Minsk office of the Organization for Security and Co-operation in Europe (OSCE) did not help win him any support abroad. 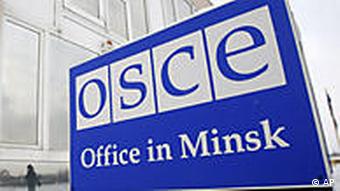 The OSCE has begun informal talks to reopen its Minsk office

"I deeply regret that Belarusian authorities did not extend the mandate of the OSCE Office in Minsk," said Lithuanian Foreign Minister Audronius Azubalis. Lithuania currently chairs the OSCE, which is based in Vienna.

"The OSCE Chairmanship will work together with Belarus and the other OSCE participating States to continue the Organization's important work in the country. We have started informal consultations to find an agreement acceptable to all," Azubalis added.

The mandate of the Minsk office ended on December 31 and has not been renewed. The office was charged with developing democracy and monitoring human rights in Belarus.

The world's largest regional security organization must close its doors in Minsk, after the Belarusian government refused to extend its mandate. The OSCE had criticized the election of President Alexander Lukashenko. (01.01.2011)