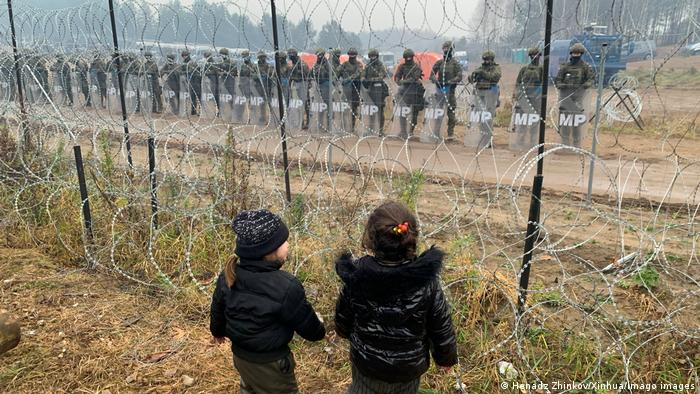 The Polish Defense Ministry reported Thursday that there had been numerous attempts to cross the border from Belarus. It said on Twitter that around 100 migrants had been detained.

As regional leaders consider the next step in the Belarus-Poland border crisis, thousands of migrants remain in the border area.

"Then the Belarusians forced the migrants to throw stones at Polish soldiers to distract them. The attempt to cross the border took place several hundred metres away," the ministry said.

In video footage Polish soldiers can be seen surrounding a large group of people huddled in the darkness.

DW Correspondent Barbara Wesel  is in the Polish border region and said according to Polish border authorities, in one instance hundreds of migrants had tried to make across. Wesel said it is not known if any made it through.

"Five-hundred migrants tried to breach the border. So they tried in a really large group to sort of push through with the idea that the police will catch some but maybe not all them so we don’t know how many of them made it through, and that shows that this is not totally over... out in the forests here in this huge border region there are still hundreds of migrants that are trying to make their way into the EU."

Conditions have improved for some migrants who are trying to get into the EU, with some given shelter in a warehouse in Belarus. Hundreds of others however, remain out in the cold and face extremely challenging conditions.

DW's Barbara Wesel was able to accompany aid workers who went to assist a Syrian man who had fallen ill somewhere in the forests.

"It was a really heartrending experience, because we got a tip from local aid workers that somebody had called for help from the forest, and we went out into the forest with them. It took four hours to find the man.  And he was a Syrian man from Homs, totally exhausted, he had fallen ill on the trail, his group had left him behind," Wesel said.

"At least they sent a location pin to this aid group, who then went to find him. They couldn’t help him on his way, he was too ill, he had to go to hospital. And the point now is they’re trying to keep the Polish police from pushing him back across the Belarusian border, because that would be something that this man certainly would not survive."

Poland has passed legislation in parliament allowing groups of migrants to be pushed back into Belarus.

Former German government migration adviser Gerald Knaus told DW that what is happening at the border is in violation of EU law.

"The Polish prime minister is not even arguing that this is in line with EU law. He simply says and explains that EU law should be irrelevant because Poland is facing an invasion. And so these basic principles, these conventions are suspended. Legally it's clear, unfortunately, politically, it's also clear that there is now a consensus in the EU to just accept this violation."

Knaus said migrants who reach Poland should be allowed to apply for asylum, while ways are found to stop travel to Belaurs. He said the EU should exercise what he calls "humane control."

"Humane control would be to say our laws are clear. Those who reach Poland have a right to apply for asylum in Poland or in the European Union. And if we want to stop people going to Belarus, we need to think about other ways to do that. That is an effort, but it is worth it. If you believe in a fundamental convention of human rights."

The migration adviser also said that the guiding principles of the 1951 Refugee Convention have been sidelined.

Border crisis: Locals step up to help, but no broad solution in sight