Being Turkish and Gay in Germany

Germany may be considered a tolerant place for homosexuals. But continuing social stigma still makes it difficult for many of the country's gay and lesbian immigrants to be open about their sexuality. 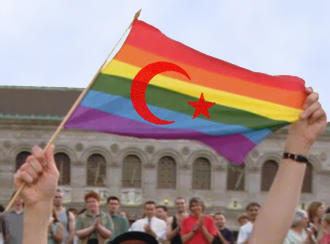 An unusual advertising campaign is making waves in Berlin: Posters and billboards of young good-looking men aren't anything new. But these ads are funded by the Lesbian and Gay Federation of Germany with the aim of bringing homosexuality out in the open within Berlin's large Turkish population.

With over 120,000 Turkish immigrants, Berlin is home to one of the biggest Turkish communities outside of the country. Despite being an important part of the liberal German capital, sexuality is still a difficult issue for the Turks in Berlin. The new poster campaign hopes to change all that by bringing homosexuality out into the open.

Showing five good-looking young mean wearing baseball caps, sweatshirts and low slung jeans, the bright yellow poster could be a typical advertisement for casual streetwear. Except that the slogan reads: "Kai is gay. Murat too. They belong to us. Always." Kai is a typical German name, Murat a typical Turkish one. 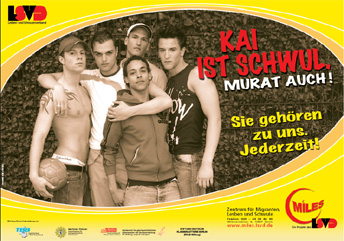 A flood of calls

According to Bali Saygili, a spokesperson for the Gay and Lesbian Federation of Germany, the campaign has caused a flood of calls to the organization's telephone help lines.

"After this awareness campaign, we had many calls from men from Turkish backgrounds who want information," Saygili said. "We even had parents who rang to ask, 'My son just told me he is gay, how do I react' or 'How can we reconnect with our child' because the family has had problems dealing with their child's homosexuality."

Twelve thousand posters and 50 billboards are plastered around Germany's capital, from Turkish newsagents to police stations. The campaign is also supported by the Turkish Association Berlin Brandenburg. The organization's spokesperson, Erin Ünsal, says that although homosexuality is still kept quiet in the Turkish community, there has been some change for the better.

"Even just a couple of years ago, it couldn't be talked about. It was still a very taboo topic. But I have the feeling it's getting better," Ünsal said. "It's still not enough of course, but the poster campaign has greatly helped in getting the Turkish community to speak out. Naturally there has been criticism, but we have received much more positive reactions."

Although it is illegal in Europe to discriminate against anyone because of their sexual orientation, prejudice against gays and lesbians still exists in Germany.

This makes it difficult for many people to come out, especially for those who belong to often conservative immigrant communities.

This can have devastating consequences including repressed feelings, living in fear of being shunned and even depression or suicide. Families also suffer because sons or daughters, brothers or sisters may move away rather than admit to being homosexual.

Sahin knows all about such difficulties. A German citizen with a Turkish background, he is also gay. But his family doesn't know about his sexual orientation.

"Sometimes I find playing this game very difficult, because it's simply a lie and I don't know how much longer I can go on before I tell my family that I am homosexual," Sahin said.

"But at the moment, my family is very narrow-minded in their attitudes. In Turkey, homosexuality is hushed up, even though it exists. And my parents come from a very traditional region in Turkey, and it's difficult to tell them that their son is homosexual. "

Important to be out

The campaign organizers believe bringing the topic of homosexuality out into the open in the immigrant community is vital. Not only for the psychological health of gay people, but also for their physical health. That's particularly important for sexually transmitted diseases.

Birol is a gay Turkish man, whose family and friends know about his sexuality. He works with people with HIV/AIDS. He has first-hand experience on how silence about homosexuality can cause unsafe sex practices and increase the risk of AIDS.

"A large number of Turkish men live a double life, some of them married, and they go out in secret, and live their sexuality in the night," Birol said. "The connection with AIDS is a problem. We wish that people would come out earlier, but this isn't the case in the Turkish community. But of course, being gay and being Muslim, is very problematic."

Homosexuality is taboo in Turkey. But in Germany, Turkish gays have more freedom. Language, however, sometimes creates problems. (Jan. 6, 2004)

Gay rights could become a top political issue in Germany after Guido Westerwelle, leader of the Free Democrats, acknowledged his homosexuality for the first time and urged greater equality for same sex couples. (July 24, 2004)