Beijing offers to pay indulgences for Tiananmen | Asia| An in-depth look at news from across the continent | DW | 03.06.2011

Many students in China see June 4 as any normal day - Beijing has been successful in making sure the younger generation don't find out about the tragedy at Tiananmen Square. But now it seems authorities want to repent. 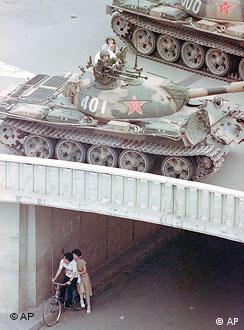 May 35th is a synonym for the day when the Chinese government massacred students in peaceful demonstrations on June 4th, 1989. Because using the number 64 as a synonym has been illegal for 22 years, Chinese citizens have come up with clever ways to get around the government’s censorship - at least on the internet.

Similar to the Arab Spring, Chinese students participated in mass demonstrations in 1989 for democracy and freedom. They also had other reasons to protest: by the end of the 1980s, food prices had risen to unprecedented levels. The students took to the streets to criticize authorities and politicians who seemed to be the only ones benefitting from the country’s planned social economy. 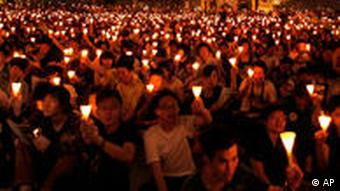 Though the student protests had been peaceful, the Chinese government sent in the People’s Liberation Army, PLA for short. Tanks rolled into Tiananmen Square, paying no mind to the masses of people there. Shots were fired. According to the official story, the military practiced "disciplined restraint." Nonetheless, conservative estimates place the number of people who lost their life on that day at a few hundred. Other sources speak of up to 2,000 deaths.

In the aftermath of the massacre, mothers of some of the victims formed the group Tiananmen Mothers, which has pushed for legal investigations into the massacre. The group has been kept under tight surveillance since it was founded. Shortly before the 22nd anniversary of the massacre, the Mothers have made public that one of their member families has been offered hush money. One of the mothers, Xu Jue, whose son was killed on June 4, is enraged at the government’s offer to compensate mass murder with money. She says the government "owes us justice but they only speak of money. How can they believe that money will make up for our loss? That seems like an insult." 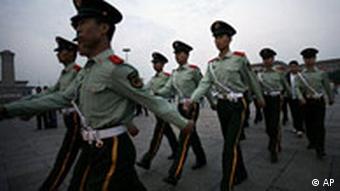 Tiananmen Square is heavily guarded on June 4 each year

Though officials have made no comment on the accusations, the Mothers say the family in question was offered around 320,000 euros by secret police.

In the summer of 89, Bao Tong had been working with the General Secretary of the Communist Party, Zhao Ziyang, who fell from power after showing sympathy with the demonstrators. Bao believes the willingness of the Chinese government to offer compensation is an admission of guilt. He sees it as a "positive thing" because "anyone believed to be sympathizing with the victims of Tiananmen in the past would have been labelled as counterrevolutionaries and kicked out of office. It seems now that the government thinks differently."

Bao believes the government would not be offering compensation if it was convinced that it had done the right thing 22 years ago. He also believes it is more important for the government to publicly admit what happened on June 4. Bao says there would be great hope for China's future if the government recognized that "deploying the military against unarmed people is not the precept of a People’s Republic." If the government were to recognize this, Bao believes there might be a chance for peaceful demonstrations in future. 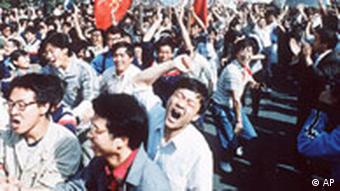 The students in Tiananmen Square were unarmed and protested peacefully

But for Tiananmen Mother Xu, repression is still very much a part of her everyday life. One week before the 22nd anniversary, she got a visit from the secret police who ordered her not to visit her son’s grave. But despite intimidation, Xu and the other Mothers still demand a thorough investigation into the Tiananmen Massacre and financial restitution for the victims of May 35, 1989, as Chinese netcitizens call it.

After years of downplaying, the Chinese government has started offering money to compensate the families who lost loved ones in the Tiananmen Massacre of 1989, according to the activist group, Tiananmen Mothers. (01.06.2011)

As images of the protests in Cairo flood the Internet, China has prevented its 450 million Internet users from looking up "Egypt" in search engines. Chinese citizens have to accept a state-sanctioned version of events. (04.02.2011)

Chinese crack down on Jasmine Revolution

Herds of police officers moved in on gatherings in two Chinese cities on the weekend and, while calling for more social harmony, the government is cracking down on internet search results even harder. (21.02.2011)