China has stationed fighter jets on Woody Island in the South China Sea, US officials have said. The news comes days after Beijing installed surface-to-air missiles on the same disputed island. 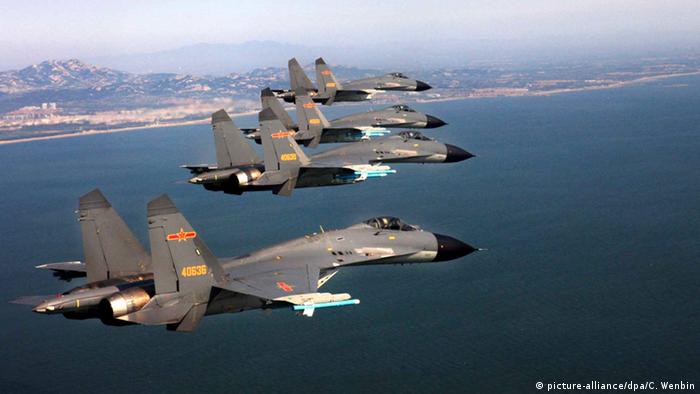 Citing two unnamed US officials, Fox News reported Tuesday that US intelligence services had spotted Chinese Shenyang J-11 and Xian JH-7 warplanes on Woody Island over the past few days.

The island, which lies in the disputed Paracel Islands chain, is also claimed by Taiwan and Vietnam. An airfield has been in use there since the 1990s, but it was upgraded last year to accommodate the J-11 fighter jets.

Navy Captain Darryn James, a spokesman for US Pacific Command, confirmed the report but highlighted that Chinese fighter jets had previously used the island.

In a separate comment, Head of the US Pacific Command Admiral Harry Harris said China is "clearly militarizing the South China [Sea]," adding that "you'd have to believe in a flat Earth to think otherwise."

Just last week, China also confirmed that it had placed surface-to-air missiles on Woody Island, defending what it said was its sovereign right to do so. The HQ-9 air defense system has a range of around 200 kilometers (124 miles).

Days later, the Washington-based Center for Strategic and International Studies released satellite imagery showing that China may be installing a high-frequency radar system in the Spratlys island chain - a move that would vastly extend Beijing's ability to monitor traffic in the South China Sea.

Six of the world's ten largest arms importers are in Asia and Oceania, a new SIPRI report finds. The region has accounted for 46 percent of global imports over the past five years. How does this impact regional security? (21.02.2016)

US warns against militarization

China's latest move in the ongoing South China Sea debate was reported as US Secretary of State John Kerry held talks with his Chinese counterpart, Foreign Minister Wang Yi, in Washington on Tuesday.

Speaking in the US capital, Kerry warned China, Vietnam and other players in the dispute to "avoid unilateral steps, including militarization."

China has repeatedly denied any aggressive intentions, but tensions between Washington and Beijing have continued to grow since China claimed sovereignty over virtually all of the resource-rich South China Sea - parts of which have also been claimed by Vietnam, Malaysia, Brunei, the Philippines and non-ASEAN member Taiwan. Some $5 trillion (4.62 trillion euros) in ship-borne trade passes through the waters every year.

Washington recently angered China by sending a warship within the 12-nautical-mile (22-kilometer, 13-mile) territorial limit around Subi Reef in the Spratly Islands archipelago, where China and the Philippines have competing territorial claims. At the time, a spokesman for the Chinese Defense Ministry called the move "a deliberate provocation."

The US said the move was to ensure the free navigation of ships in the region, and added that it would continue to sail through waters claimed by Beijing.