Behind Moroccan-German diplomatic crisis, a list of grudges | Middle East| News and analysis of events in the Arab world | DW | 02.03.2021

A leaked letter suggests Morocco might suspend diplomatic relations with Germany. According to Moroccan media, the proposal has been a long time coming. 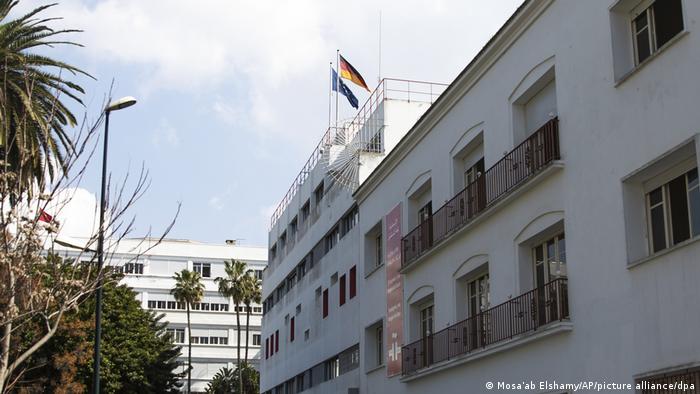 On Monday, a letter was leaked in which Moroccan Foreign Minister Nasser Bourita suggested to his prime minister that all of Morocco's government offices suspend their relationship with the German embassy in the capital, Rabat, as well as with other German cultural and political organizations in the country. Bourita said this was necessary because of "deep misunderstandings" on "issues fundamental for Morocco."

The foreign minister said his ministry had already suspended contact with German diplomatic representatives in Rabat. Germany's embassy is in the Moroccan capital, and the country has consulates in Casablanca and Agadir.

Although there has been no official German government statement on the matter, the word from Berlin is that the German government sees no reason to disrupt the two nations' good relationship like this. The Moroccan ambassador had been invited to come to the German Foreign Office urgently and explain the letter, insiders said.

As one source, working at a German cultural organization based in Rabat, told DW, the foreign minister's proposal seemed "to be a very deliberate leak." The source could not be named because of the sensitivity of the current political situation. On Tuesday, it was still unclear how the developing diplomatic stoush would impact their organization. "The letter was first released on social media and messaging channels like WhatsApp," the source recounted. "But local media also seemed to have it at the same time. A coordinated leak like that, and a letter like that, would not have happened without senior leadership knowing about it." 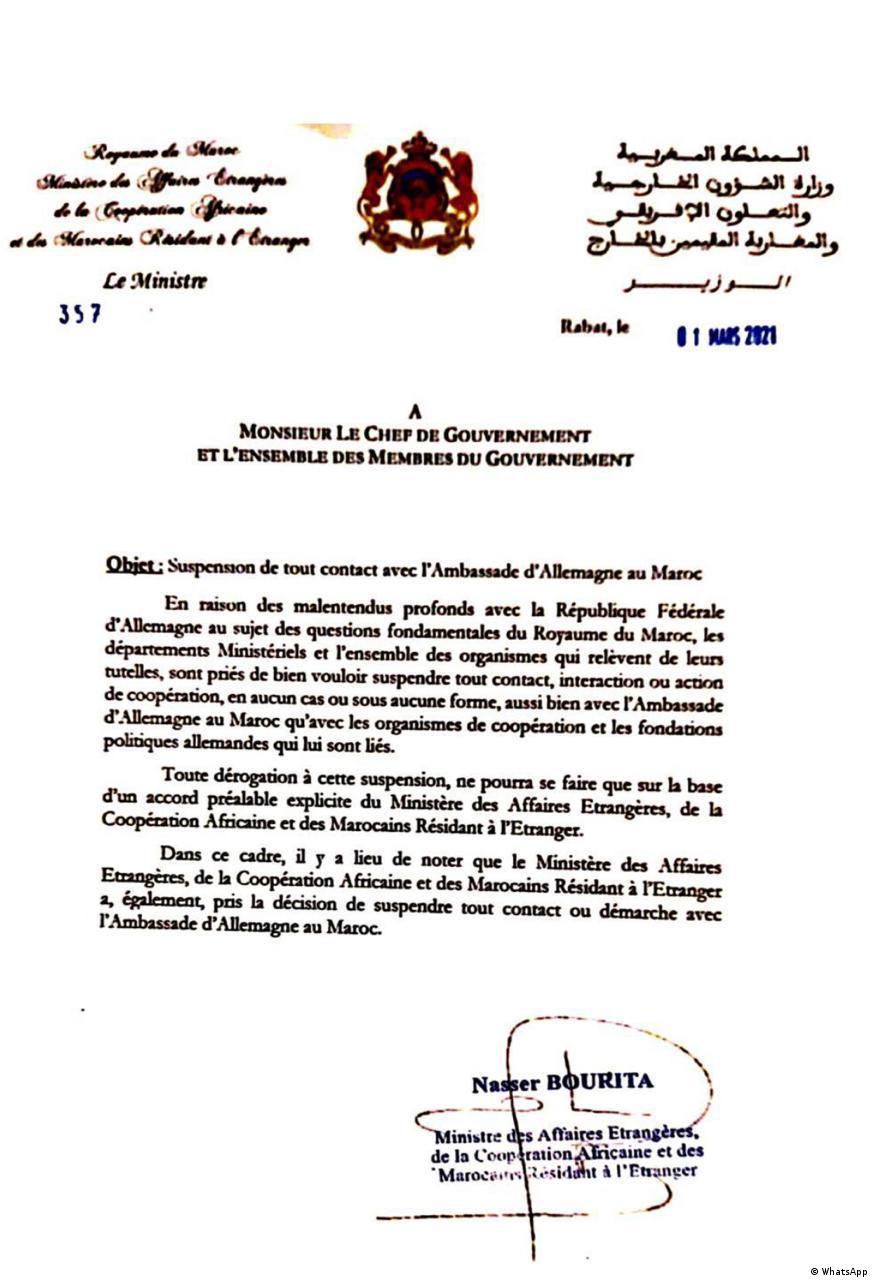 The letter was leaked via social media

The source believes that the letter can be seen as "sabre rattling" and "an accumulation of Moroccan grudges."

First on the list of problems, Ulrich Lechte, a German politician who heads the parliamentary subcommittee on matters concerning the United Nations, told DW, is the perception that Germany is working against Morocco's claims of sovereignty over the Western Sahara. "The exact impetus [for the letter], what was going on in the background, now has to be clarified," Lechte said.

The Western Sahara dispute involves a former Spanish colony Morocco annexed in 1975. In one of the world's longest-running territorial disputes, a group called the Polisario Front dispute the Moroccan annexation. The pro-independence activists have called for a referendum on self-determination in the area, which is partially controlled by them and partially by Morocco. An UN-monitored cease-fire between the two opposing forces has held since 1991 and European Union diplomats advocate a political solution.

Control over the Western Sahara territory is one of Morocco's most important foreign policy imperatives and last December, the US government, still headed by Donald Trump at the time, recognized Moroccan sovereignty over the disputed territory. The controversial move by the Trump administration was widely seen as a thank you to Morocco for officially re-establishing ties with Israel. It was widely criticized. 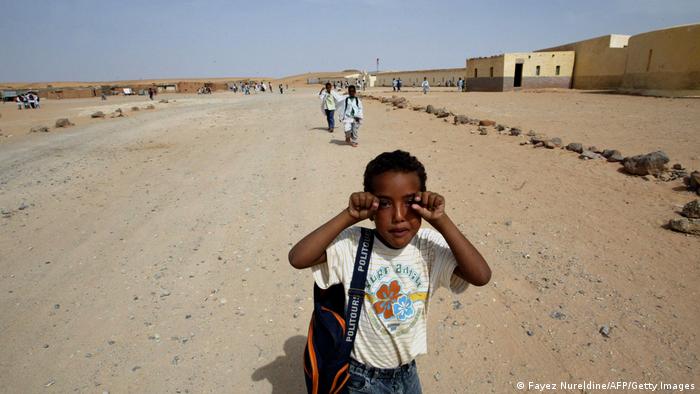 While the German government welcomed the normalization of relations between Israel and Morocco at the time, the German Foreign office also stated that its "position on the conflict concerning the Western Sahara is unchanged. We are seeking a fair and durable UN-mediated political solution which is acceptable to all sides."

In December last year, Germany called upon the UN Security Council to hold a closed door meeting on the US decision and the deteriorating situation in the Western Sahara, after the long-running cease-fire appeared endangered. "We need a revitalization of the political process," Germany's ambassador to the UN, Christoph Heusgen, said.

This meeting was obviously not in Morocco's interest, Lechte conceded. "Morocco would very much like it if the EU — and Germany, as one of its most powerful states — simply acknowledged the Trump move. But just as we did before, we are relying on a UN process."

Another issue that was mentioned by Moroccan critics of Germany is that, on February 27, the parliament in the German state of Bremen raised the flag of the Sahrawi Arab Democratic Republic — the Western Saharan independence movement's self-declared territory — over its buildings. On their official Facebook page, state politicians said they had done so to mark 45 years since the Sahrawi Republic was founded.

Moroccan officials are also apparently still smarting because they were not invited to a January 2020 conference on the Libyan conflict in Berlin. The Polisario Front independence movement is supported by neighboring Algeria and that country was invited to the talks, while Morocco wasn't. Both Germany and Morocco have similar goals for Libyan sovereignty and the Moroccans see themselves as regional power brokers and good faith negotiators.

Another sticking point mentioned by Moroccan media is Germany's refusal to prosecute Moroccan-German activist Mohamed Hajib, who spent seven years in a Moroccan jail. A UN Working Group on Arbitrary Detention found Hajib was arrested based on a confession obtained under torture. After Hajib was released in February 2017, he returned to Germany where he has devoted his social media feeds to criticism of the Moroccan government and security agencies. In turn, the latter issued an international warrant for his arrest although it was canceled by Interpol in February. 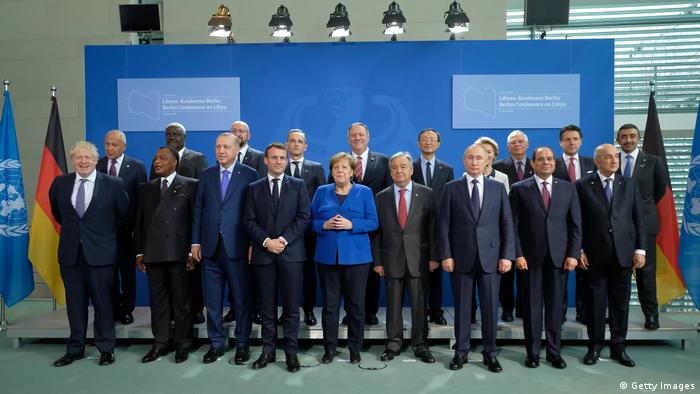 Leaders who attended the Libya conference in Berlin in January 2020

Some Moroccan media also reported vague allegations of espionage, apparently based on the fact that a German researcher traveled to the Western Sahara area, and other outlets mentioned that a recent report by Transparency International, which is headquartered in Berlin, also upset the Moroccan government. The report, released in February, concluded Morocco had "a severe and systemic level of corruption" that had only worsened during the pandemic.

On social media, ordinary Moroccans discussed many of these alleged provocations. More nationalistic commenters argued "Morocco first" should be their country's foreign policy priority and claimed that Germany was "encroaching on Morocco's sovereignty" with its "biased pro-separatist" position on the Western Sahara.

Moroccans on social media did not view this as an easily resolved or temporary dispute. Some even believed the move against Germany signified tougher Moroccan attitudes toward Europe, in general.

All this comes despite ongoing cooperation between Morocco and Germany in many areas, and the fact that Germany is a major foreign aid donor for the North African country. In December 2020, Morocco received €1.3 billion ($1.57 billion) in financial support from Germany, earmarked for bank loans to local entrepreneurs, financial reforms, investment in renewable energies and a COVID-19 fund, among other things. 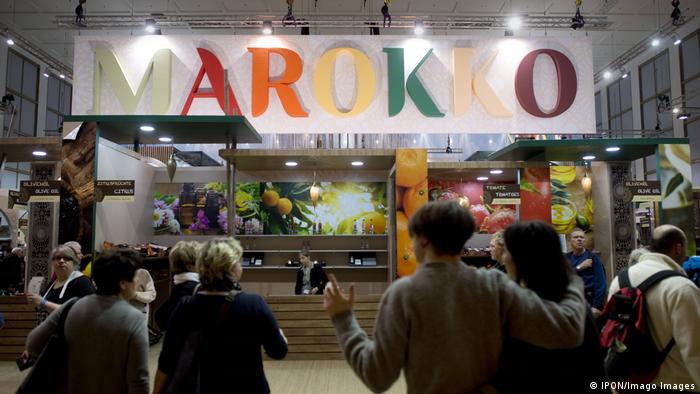 Ongoing cooperation: The Morrocan stand at Green Week in Berlin in 2016

UN staffers return to Western Sahara after spat with Morocco

Morocco has allowed United Nations employees to return to their mission in Western Sahara. Rabat expelled more than 70 staff after UN Secretary General branded the Moroccan annexation of the territory "an occupation."