India meets Europe at the Beethovenfest's Campus Project 2018: Composers Rakesh Chaurasia and Bernhard Schimpelsberger discuss the challenges of collaborating on a special piece commissioned by DW. 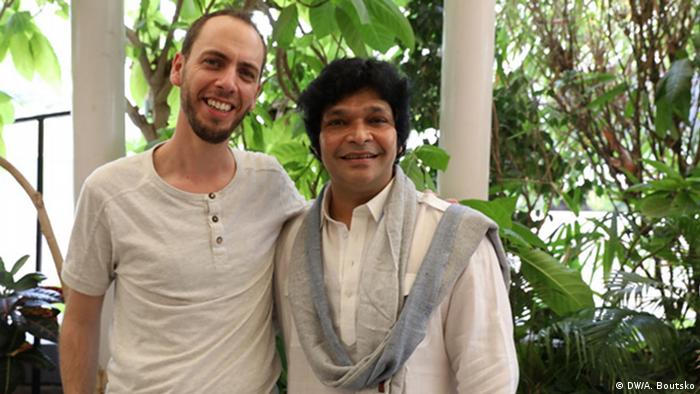 DW: Rakesch Chaurasia and Bernhard Schimpelsberger, you composed together a piece of music commissioned by DW for the Beethovenfest Bonn 2018. It's titled "Kismet," which means "Fate." This is the first time that DW has commissioned two artists to write a piece of music. How did this project work out for you in practical terms?

Bernhard Schimpelsberger: I would say that the core comes from Rakesh, with the Indian classical melodies. I knew that we would only able to do something strong, to branch out into something strong, if we have a strong core. Otherwise it's just going to be a combination of sections and different sounds or ideas.

Rakesh Chaurasia: And the chords came from Bernie. I think it's all a group thing. You can't tell who has done what; the additions are like ornamentation, making the piece more beautiful. 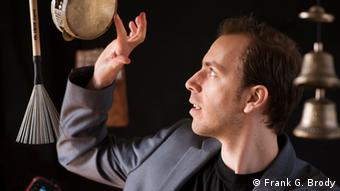 BS: If I can add one thought here, it's almost like if you look at a painting: I would say the theme of the painting has come from Rakesh. But then there are lots of different rooms, lots of different dimensions that are opening up behind that painting and that gives the context.

That was for me a very important idea that maybe there is an Indian classical melody that has been played like that for hundreds of years but by changing the context behind it, another space opens up and that melody suddenly sounds different. And in a way that's what we're doing.

In Indian classical music you're working on one emotion and then you're going really into depth with that. Whereas in a western classical music symphony, you can experience everything right from joy to frustration and pain and that was my aim: To try to create different emotions behind the very strong music that Rakesh has contributed.

We have your score, and you can see it on the note stands of the musicians in the National Youth Orchestra of Germany. But music in India doesn't have musical notation. That means that "Kismet" is partly written down and partly improvised. Can you explain how that works?

RC: Well it's a challenging book for me, because we are not used to reading and playing on stage. From the early age, the taught process of Indian classic is all about improvisation. So if we play the same piece everyday we are trained to do it in a new way all the time. We can do a solo concert for maybe one or two and a half hours without repeating any phrases.

Today we are witnessing a moment in music history, because this is the first work written for bansuri and a symphonic orchestra. Rakesh, you play the bansuri, What is the special quality of this instrument?

RC: It's a little bit challenging for me because the bansuri, the bamboo flute, is not made in a factory. So it's not very well pitched. So you have to adjust all the time because the orchestra is exactly in pitch at a frequency of 440 Hz. 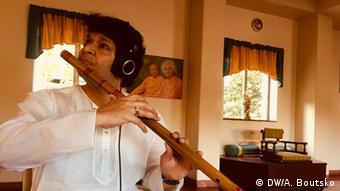 But it's fun because the flute is an instrument that gels very well with any other instrument. The flow and the sound of it are quite soothing. And it can be aggressive at the same time. This is one of the instruments which is popular in several civilizations all around the world under different names. There is the shakuhachi, there is the recorder, the silver flute or the bamboo flute with keys — so everybody knows this instrument, but the music is different.

This project is an adventure. What does it mean for you?

RC: We hope that people accept it and take it positively because they are used to listening to old compositions which have already been played for ages — and there are amazing orchestras playing all this Beethoven music.

But to add an element like this, it has to be like a cherry on the cake. It has to be something new and brighter and sound good. In the end, the music should reach the people. If we play from our heart it should reach out to everybody's hearts.

BS: For me it's a dream come true. It is a project on so many levels. It's doing the thing that needs to be done in the world today: To step into the realm of Beethoven and history and to consider that classical music has to grow.

Beethoven would also have been adventurous today. He would probably be making electronic music for computer games or something like that. Or Hollywood scores or whatever — something adventurous.

So that is really inspiring for us. And then working with young people. It's a beautiful thing. They are so open and very talented people we have here. And I hope that we can give them something that inspires them to go on and to become better musicians and to work hard.

The beginning of Beethoven's Fifth Symphony is known the world over, yet the opening motif is only four notes long. Music researchers have long wondered — is fate really knocking on the door at the start of this piece? (13.09.2018)

Before the beginning of the 2018 Beethovenfest, director Nike Wagner talks about the implications of the festival motto this year, "Schicksal" (Fate). (31.08.2018)