The Brazilian youth orchestra Sinfonica Heliopolis recruits its members from one of Sao Paulo's favelas and offers young people the chance for a better life - through music. 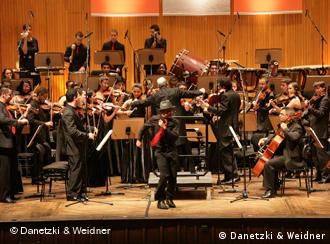 Sinfonica Heliopolis at the Beethovenfest

It all started 14 years ago, when the Brazilian conductor Silvio Baccarelli gave 36 extremely talented children from Sao Paulo's slums the chance to receive a music education and to thus create better prospects for their future. Nowadays, some 1,000 children and young people are trained at the Instituto Baccarelli.

Eighty members of this Brazilian youth orchestra called Sinfonica Heliopolis between the ages of 13 and 24 played at the Beethovenfest in Bonn. The orchestra is named after the Heliopolis favela, with some 130,000 residents the largest slum in the metropolis of Sao Paulo.

In this concert recording, the Brazilians interpret Beethoven's Eighth Symphony with passion and feeling for dynamic nuance. "Being able to play Beethoven in the city where he was born is very exciting," said bassoonist Felipe dos Santos Arruda. "I have never felt so close to a composer before."