Bayern to open season against Wolfsburg as Bundesliga fixtures confirmed

The Bundesliga fixture list has been released with Bayern Munich opening the season on home turf against Wolfsburg. Fans will need to wait until September for Bayern and Borussia Dortmund to meet on league terms. 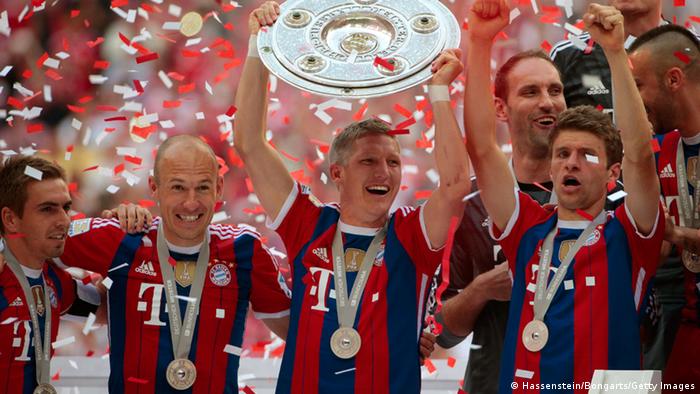 The German football league DFL have announced the Bundesliga fixtures for the 2014-15 season. Champions Bayern Munich will kick-off the campaign on August 22 at home to Wolfsburg.

Borussia Dortmund's first match of the season will be against Bayer Leverkusen, who hired former Red Bull Salzburg coach Roger Schmidt in the offseason. Schalke, meanwhile, will head to Hannover and Borussia Mönchengladbach host Armin Veh's Stuttgart on the opening weekend.

Cologne, last season's second tier champions, will mark their return to the top-flight at home to Hamburg, who narrowly protected their league status in a relegation play-off. Paderborn will make their Bundesliga debut at home to Kasper Hjulmand's Mainz.

In the second round of fixtures, Schalke will host Bayern Munich at the Veltins Arena, while Borussia Dortmund travel to Augsburg.

Matchday four sees Köln take on Borussia Mönchengladbach in one of the most traditional derbies in German football. Meanwhile, Hamburg host Bayern Munich on the same weekend.

On matchday six - the weekend beginning September 26 - Borussia Dortmund will head to Schalke for the first Ruhr derby between the sides. The return match will be played on matchday 23 at the end of February.

Dortmund will make their first trip to the Allianz Arena to face Bayern on Matchday 10, while the teams convene again at Signal Iduna Park on Matchday 27.

The two sides will also meet in the DFL Super Cup, which will be played on August 13.

The first round draw of the German Cup sees 13 Bundesliga clubs facing teams outside the top three divisions. This round offers the chance for amateur players to face their footballing heroes and perhaps cause an upset. (02.06.2014)