Bayern Munich doctor Hans-Wilhelm Müller-Wohlfahrt and his team of physios have quit with immediate effect. The Munich-based doctor cited a "damaged relationship of trust" as the reason for his departure. 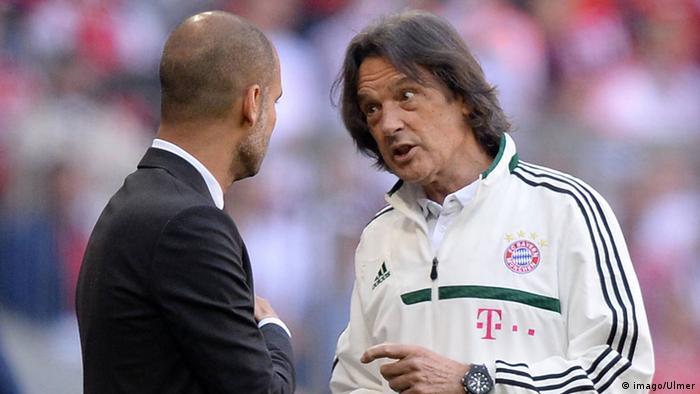 Bayern Munich's iconic team doctor Hans-Wilhelm Müller-Wohlfahrt, 72, made the announcement for himself and his staff the day after Munich lost a Champions League quarterfinal match 3-1 in Porto. The Munich-based doctor will continue to work for Germany's national team.

"After the Champions League game ... the main blame for the defeat was put on the medical department for reasons we don't understand," he said in a press statement sent to various German news agencies on Thursday evening.

In a statement released on Friday, Bayern said: "Dr. Müller-Wohlfahrt in particular, but also his team, have performed first-class work for the club and its players. Our sincere thanks are due for this."

Bayern's press officer Markus Hörwick was not drawn into discussing the matter at the club's press conference on Friday ahead of their game against Hoffenheim this weekend. Head coach Pep Guardiola dismissed there being a feud between himself and Müller-Wohlfahrt, saying "Nothing happened. It was his decision to leave and I respect it."

Bayern Munich were apparently caught off-guard by the resignation of Müller-Wohlfahrt and his team. Hörwick stated that the club are looking for a solution but in the meantime, Dr. Volker Braun will support the team with medical needs at matches.

Müller-Wohlfahrt has been the team doctor since 1977, providing nearly 40 years of service. He did resign in 2008 after an argument with then manager Jürgen Klinsmann, before returning upon Klinsmann's departure.

Munich have a long injury list featuring the likes of Bastian Schweinsteiger, Arjen Robben, Franck Ribery and David Alaba. The team is currently competing in three competitions at this end of the season. They lead the Bundesliga, and are also still involved in the German Cup (known in Germany as the DFB Pokal) and the UEFA Champions League.

There has been apparent tension between Müller-Wohlfahrt and Guardiola since the latter's arrival. The Spanish coach sent an injured Thiago to Barcelona for treatment without consulting the team doctor.

Opinion: "The doc" is not to blame

Bayern Munich's team doctor Hans-Wilhelm Müller-Wohlfahrt has stepped down after differences with the club. DW's Stefan Nestler believes it reveals a lot about the atmosphere currently at the football club. (17.04.2015)