Bayern Munich Under the Christmas Tree | Business| Economy and finance news from a German perspective | DW | 23.12.2005

Bayern Munich Under the Christmas Tree

Shops selling souvenirs for soccer fans are doing good business in Germany ahead of Christmas and in the lead up to the 2006 World Cup matches. 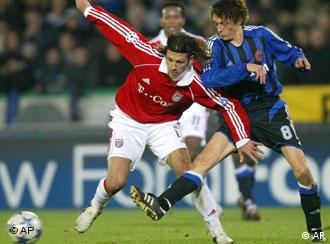 Jerseys and other items representing soccer teams are selling like hotcakes

"We have special articles that are only produced for Christmas time -- Christmas jerseys, in co-operation with our sponsor, which sold very well," said Mathias Serba, CEO of BVB Merchandising, describing what is on offer for Borussia Dortmund fans.

"We have sweets that we sell for Christmas like chocolate Santa Claus and advent calendar Christmas chocolate," he added. "Besides that we have seasonal articles like scarves and gloves that sell very well because of the weather."

As Germany gets ready to host the World Cup next year, shops selling articles for soccer fans have already been doing a brisk business this Christmas. In Germany, there's a whole industry that mixes goals with Glühwein, or mulled wine. As well as promoting regional culinary specialties, it has almost everything else the discerning fan could possibly want for the festive season. 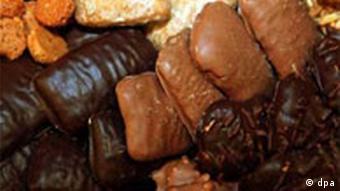 Specialties such as Aachener Printen Christmas cookies are also offered

Almost all the clubs, whether Hertha BSC Berlin, Arminia Bielefeld or FC Bayern Munich, sell chocolate advent calendars to help pass the time before the day the jersey is put under the Christmas tree arrives.

Ornaments in the club's color for decorating the Christmas tree are also popular. Hamburg's FC St. Pauli fans can buy them in black with a skull and cross bones.

Hungry fans can tuck into those regional mouth-watering German Christmas delicacies which come in special fan packaging. The border town of Aachen is famous for its Aachener Printen -- Christmas cookies -- they're being sold in a wooden box with the emblem of the local club Alemannia Aachen -- a big letter A in yellow on a black background, perched above an eagle.

Fans of FC Bayern Munich can order a set of three liter bottles of Glühwein. On the label is Santa Claus, clad in the characteristic red of Bayern Munich. And on their Web site, they sell fruit tea as well. 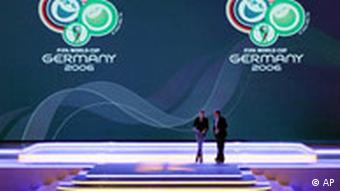 The 2006 World Cup is increasing sales

There is also an advent quiz on the website of the DFB, the German football federation, inviting readers to find Santa Claus who is hiding somewhere on the site. At the last count, there were 171 jerseys still to be won as prizes.

Fans of FC Nürnberg can send Christmas greetings on a seasonal club postcard and almost all clubs sell Christmas stockings in club colors. But which gift really sells better than all the others.

"It's definitely the jersey, the Christmas jersey as well as the normal home jersey," Serba said.

A 31-year-old German man is unlikely to regret helping clean up after last week's soccer World Cup draw. He found something in the garbage that may just help him pay for Christmas presents. (Dec. 16, 2005)

A "Passion" for Soccer

Soccer fans have a religious devotion to the sport. So it's fitting that the World Cup opening ceremonies will be staged by the director of the Passion Play. And, that fans can settle into a pew to watch the matches. (Oct. 19, 2005)

During the festive season, the scent of roasted almonds and mulled wine fill the streets of German cities as shoppers in mittens and gloves pour over handmade ornaments and other goodies at Germany's Christmas markets. (Nov. 27, 2005)