Bayern Munich back to winning ways but not everything is fixed | Sports| German football and major international sports news | DW | 20.10.2018

Bayern Munich back to winning ways but not everything is fixed

After a difficult few weeks, Bayern Munich are once again celebrating a win. Though they deserved victory over Wolfsburg, there are signs that a fair bit of work is needed to get back to where the club wants to be. 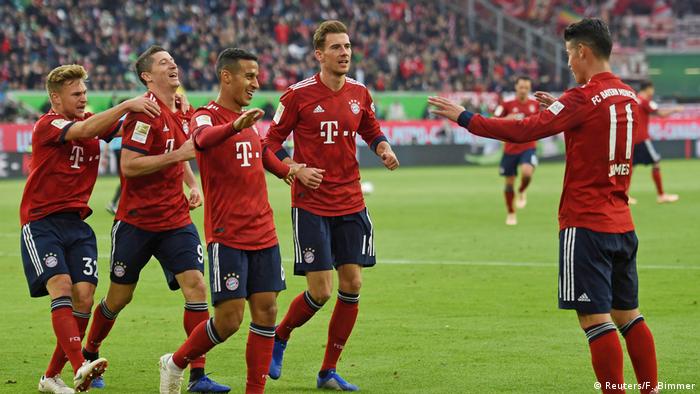 Just as a bad run doesn't neccessarily make a bad team, a win doesn't wipe out everything that preceded it.

Bayern Munich went in to Saturday's clash with Wolfsburg in the eye of a media storm at least partly of their own making. While the rights and wrongs of the broadside from three of the club's most senior officials will continue to be discussed, the fact that Uli Hoeness, Karl-Heinz Rummenigge and Hasan Salihamidzic felt compelled to speak about a facet of the game that has been around for years and is experienced by all clubs, suggests a level of tetchiness about how the German champions are perceived.

Why else make the point about "disrespectful, derogatory, outrageous" reporting only when you're in the midst of a bad run?

Kimmich backs the board

Bayern's strong display on Saturday, while far from perfect, has lifted them out of their rut, and afterwards Joshua Kimmich lent his support to the men who sanction his wages.

"I think it's a great sign that the club protects the players," the right back said. "That's good for the sense of togetherness inside the team."

For long stretches of the 3-1 win, Bayern looked something close to the united team that won Kovac's first seven matches in charge. Robert Lewandowski was unplayable at times, Niklas Süle continued his rise towards being the best center back in Germany and Thiago and Javi Martinez controlled the middle of the park.

"There was a lot of pressure on this game and I want to thank the boys for a top performance," said Kovac. "It was a very concentrated display. It is the first step and showed that Bayern can fight back."

Fullback cover remains a cause for concern

The club's first win since late September came without three of the its mainstays - Thomas Müller, Franck Ribery and Jerome Boateng, none of whom got off the bench. Though all have had their struggles this term, few sides in Europe can afford the luxury of benching three players with such top-level experience.

Yet, while Bayern's strength in depth is generally impressive, the fullback positions remain a serious area of concern. Hoeness was keen to point out the failings of Juan Bernat while singing the praises of Rafinha on Friday but, at 33 and with time catching up with him, the Brazilian now looks as unconvincing a top level fullback as the Spaniard.

Rafinha came on for David Alaba at half time (with Alaba - not for the first time this season - struggling with injury) and was caught the wrong side of Wolfsburg's Wout Weghorst almost straight away. The referee awarded a penalty only for Rafinha to be spared by the linesman's flag, raised for an earlier offside. 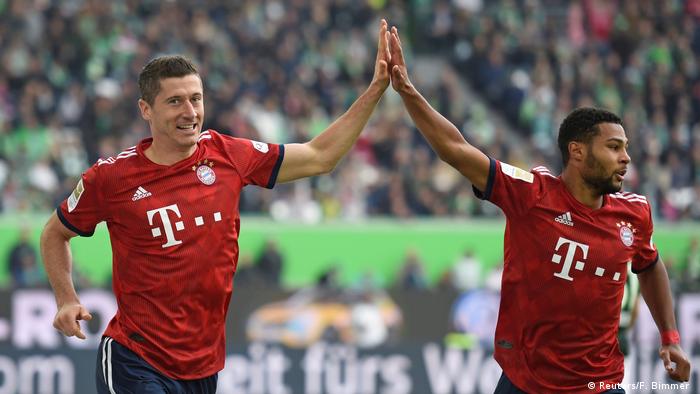 Robert Lewandowski and Serge Gnabry celebrate during the win over Wolfsburg

Indeed, while Bernat almost "single-handedly" lost Bayern the Champions League, according to Hoeness, mistakes by Rafinha and fellow understudy Sven Ulreich against Real Madrid in the semifinal actually did end Bayern's hopes in last year's competition.

Much has been made of Bayern's lack of transfer activity in the summer, with even Kovac admitting he'd like more depth at fullback - Rafinha is now the cover for both sides of the pitch. New arrivals Leon Goretzka and Serge Gnabry have both had injury problems but neither have yet taken Bayern up a notch.

Bayern's flaws are significantly smaller than most, but so is the margin for error at the very top. With a favorable run of fixtures between now and the meeting with top of the table Borussia Dortmund on November 10, Kovac has time to iron one or two out. Others may require a little help from the men above him.