After failing to score midweek, Bayern Munich rediscovered their range with a 6-0 win in Paderborn. Schalke missed out on victory late on, while Augsburg's Marwin Hitz scored a dramatic equalizer against Leverkusen. 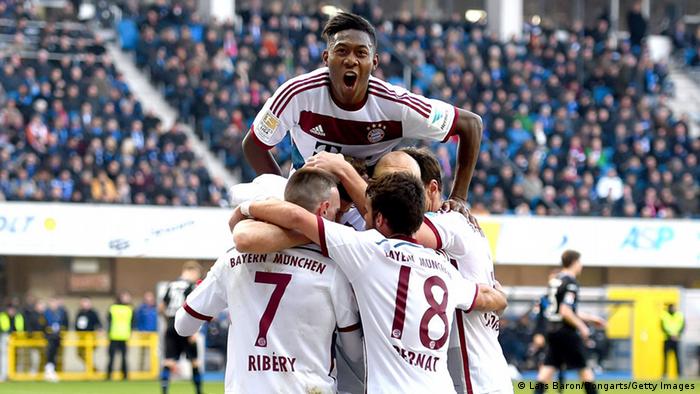 15,000 packed into the Benteler Arena, but it could have been 80,000 if hosts Paderborn had been able to accomodate all the ticket requests. Xabi Alonso, Jerome Boateng (back from suspension) and Franck Ribery replaced Bastian Schweinsteiger, Mehdi Benatia and Mario Götze respectively.

Paderborn stayed compact early, but in minute 24 Robert Lewandowski fnished a neat Arjen Robben flick as Bayern Munich scored with their first real chance. Eight minutes before the break, Lewandowski doubled his tally when he converted at the near post after a smart ball back in from Ribery. Robben won and scored a penalty on the hour mark - Florian Hartherz was perhaps harshly sent off in the process. The goal made a Bayern win a certainly and meant that Robben has scored at least once against all of the current first-division teams.

Ribery added a fourth, drilling home after Robben's heavy chest control fell at his feet in the area. Mitchell Weiser sent a delicate lob over Lukas Kruse to add some gloss to the score. And Robben made it a half-dozen, darting ahead of the goalkeeper to convert another Ribery pass.

Despite a slump in form and question marks over their style, Leverkusen took the lead after just seven minutes away at high-flying Augsburg. Josip Drmic broke forward on the right-hand side before firing towards goal. Marwin Hitz, returning after three months out, saved but spilled the rebound back to the Swiss striker who lashed in. 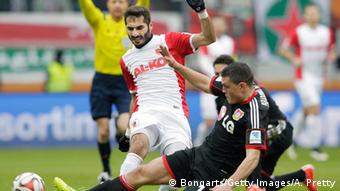 The furious tempo of the game continued, but Leverkusen failed to take advantage of their chances. The best of which fell to Heung-Min Son who looked destined to score after Hitz spilled again, but a diving Ragnar Klavan headed his effort away from goal. Augsburg huffed and puffed, Raul Bobadilla dragged an effort wide, but they failed to really test Bernd Leno.

Leverkusen were made to pay for their wastefulness in front of goal when Augsburg equalized shortly before the hour mark. Francisco Caiuby took advantage of space inside the area to fire past Leno, scoring his first goal for the club. The goal swung the momentum in favor of the home side, as Bobadilla was denied by Leno and then Tobias Werner couldn't put in the rebound.

But Augsburg also failed to take advantage of their chances, and Stefan Reinartz fired a deflected effort from range past a despairing Hitz to give Leverkusen the lead with five minutes to play. There was more drama in store for the Swiss goalkeeper though. With the seconds ticking down, Hitz went up for a corner. After a scramble, the keeper fired home from close range to the pandemonium of the home fans. The final score was 2-2.

Schmidt starts with a win

Mainz, under the stewardship of new manager Martin Schmidt, started the livelier of the two teams against Frankfurt - Pablo de Blasis had an effort kept out by Kevin Trapp. A great pass by Marc Stendera set-up Stefan Aigner to cross for Alex Meier, but he was closed down before he could get a shot away. With the first real chance of the game though, the visitors took the lead. Haris Seferovic threaded a neat ball through for Aigner, who beat Loris Karius at the near post. It wasn't a lead that lasted long though. Shinji Okazaki sprinted through, drew out the goalkeeper before squaring to Christian Clemens to tap in his first Mainz goal.

Five minutes after the restart, Mainz pulled clear. Johannes Geis curled a free kick towards the near post that Trapp got a hand to but couldn't keep out. Moments later, a swift counterattack ended when Yunus Malli fired home after being found in the area. Carlos Zambrano saw red for a frustrated elbow late on as Frankfurt couldn't find a way through. 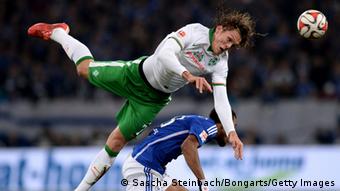 19-year-old striker Felix Platte made his first Bundesliga start ahead of Kevin-Prince Boateng, but once again it was in-form Werder Bremen who looked the more dangerous early on. Franco di Santo saw a shot deflected over but it was a chance that typified the first half as both sides threatened but never created anything concrete. Shortly before the break, Benedikt Höwedes nearly had a chance to pull the trigger in the box, but once again couldn't get the ball under control.

In the first action of the second half, Zlatko Junuzovic whipped a free kick narrowly over the bar but it was Schalke who opened the scoring. Raphael Wolf let Max Meyer's speculative long-range effort slip under him to the delight of the Gelsenkirchen crowd. Schalke were on the verge of sealing the three points, but Sebastian Prödl beat Timo Wellenreuther in the air to nod home an equalizer in the 91st minute. Schalke threatened to retake the lead again, but were all out of luck.

Hoffenheim miss the chance to win

After 14 years at Freiburg, Hoffenheim's goalkeeper Oliver Baumann returned to face his former team in the stadium he used to call home. After an even opening, Immanuel Höhn scored Freiburg's 13th set-piece goal this season after eluding Sebastian Rudy to tap home at the back post. Despite being second best, Hoffenheim did find an equalizer as the first half came towards a close when Kevin Volland fired in a half-volley outside the area after great control by Anthony Modeste.

The French striker curled narrowly wide and Eugen Polanski saw an effort saved by Roman Bürki as Hoffenheim improved in the second half. Freiburg couldn't get a grip on the game as Volland and Modeste combined again to nearly give the visitors the lead. Marc Torrejon saw red for Freiburg late on as the home side held on for a 1-1 draw.

Cologne drew 1-1 at home with Hannover in matchday 22's evening game, which was far more entertaining than the scoreline. Joselu's header gave the visitors the lead, before Anthony Ujah equalized by the same means. (21.02.2015)

A sixth game without a win for Stuttgart leaves them adrift at the bottom of the league. Meanwhile, Dortmund take another big stride towards survival. (20.02.2015)