Bavaria's ancient traditions are often used to illustrate German culture. Yet the Free State of Bavaria was only founded 100 years ago. To celebrate the milestone, a new exhibition explores its unique heritage.

Although Germany's southernmost state has existed for millennia, the Bavarian republic that we know today was first declared at the end of World War I.

It was in 1918 that the people of Bavaria declared themselves free of the dynastic rule of the House of Wittelsbach and the Free State of Bavaria was born.

The Wittelsbachs had ruled Bavaria since the beginning in the 12th century, the region one of the family's many dominions that was incorporated into the Holy Roman Empire for a few hundred years.

Descendants of the family dynasty have held diverse titles that reflect Bavaria's changing size and influence, with its royalty variously known as the King of Bavaria, King of Sweden, King of Greece and Elector of Cologne.

While descendants of the Wittelsbachs continue to make Bavaria their home today, a new exhibition created by the Center of Bavarian History titled "Mythos Bayern" — which starts May 3 at the stunning Ettal Abbey — is celebrating 100 years of the republic. 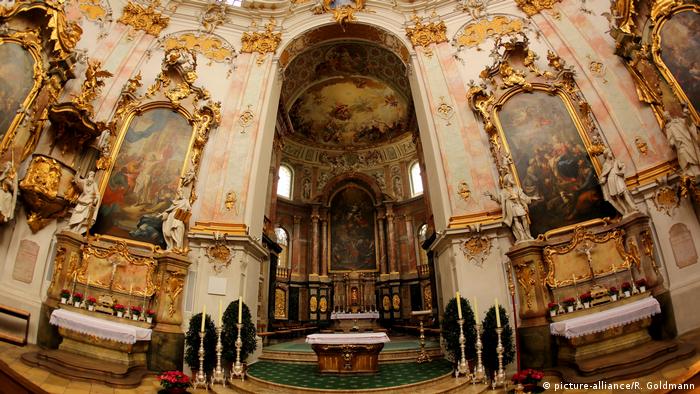 The altar inside the Benedictine Abbey

A Benedictine monastery as backdrop

The exhibition considers not only the region's unique landscape and its people – including at least one notable member of the Wittelsbach family, King Ludwig II – but also highlights the ways these myths have come to life in stories and in artifacts that date back hundreds, if not thousands, of years.

"Mythos Bayern" couldn't have found a more perfect backdrop: the Ettal Abbey is comprised of extraordinary baroque architecture and one-of-a-kind religious artistry. Located in a small village near Garmisch-Partenkirchen in the Alpine foothills, it is one of the largest Benedictine monasteries in the world. Thirty three monks still call it home.

Ettal Abbey dates back to 1330 when Emperor Ludwig the Bavarian stopped on the road from Augsburg to Italy. It was then that the figurative foundation stone was said to have been laid, both as a sign of the duchy's southern border and of the emperor's religious devotion.

Legend has it a bit differently, though: in the Ampferang forest, the emperor's horse is said to have sunk into the mud three times as he made his way back from Pisa with an image of the Madonna — a painting that remains in the abbey today. This auspicious occurrence was said to have been a signal to the emperor that this was the perfect location for constructing the ode to his devotion. 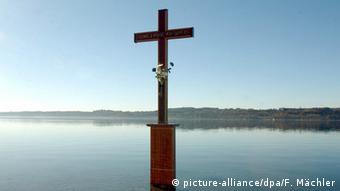 The legend of the Ettal Abbey is just one of many myths deriving from the natural world explored in the exhibition housed in a never-before-open-to-the-public section of the abbey.

While the artifacts inside include a 3,000-year-old Celtic logboat that is 15.5 meters long and weighs two metric tons, the exhibition space also includes a typically Bavarian herbal garden with benches where visitors can sit in quiet contemplation.

That outdoor experience is a vital part of the exhibition, which tells the story of Bavaria by exploring the relationship between the region's unique landscape and its people.

With a focus on the mountain ranges and forests of Upper Bavaria, a region so named for the Alps that rise out of the lowlands, the exhibition looks at how the landscape inspired everything from silver mugs (see in the shape of a mountain goat's head) to porcelain tea services imprinted with pastoral scenes.

Landmarks like the Zugspitze, Germany's highest mountain peak, and the turquoise waters of the Königssee near Berchtesgaden, hold a special place in Bavarians' hearts. As such, their use in paintings and other artworks is explored in depth. 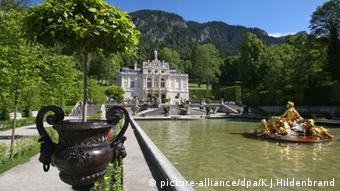 Close to the Ettal Abbey lies the Schloss Linderhof, one of King Ludwig II's dream palaces

As the exhibition walks visitors through the stories of the "Bavarian Legend," it also considers the development of these myths over time and pays special tribute to one person in particular: King Ludwig II.

Best known for his world-famous castles, including the nearby Schloss Linderhof, a tribute to Versailles, and Germany's most visited tourist site, Neuschwanstein, Ludwig and the dreams and fantasies he shared for his kingdom come to life in Ettal.

While there is no one particular thing that curators point to and exclaim, "This is the legend of Bavaria," taken together, the elements examined in "Mythos Bayern" — the region's dark forests, the depths of Lake Starnberger, the peaks of the Ammergauer Alps — create a better understanding of Germany's southernmost state and its greater meaning in the country.

"Mythos Bayern" runs from May 3 until November 4 at Bavaria's Ettal Abbey.

Locals lost faith in Germany's federal authorities when tens of thousands of refugees entered Bavaria in the summer of 2015. Now the southern state plans to reinstate its border guard. (20.04.2018)

Bavaria is the most popular travel destination in Germany - every year around 7.5 million foreign guests visit the state. And these sights top their must-see lists: (09.01.2015)