The five most promising contenders for France's presidency faced off in their first televised debate. Who were the night's winners, and who were its losers? A look at the reactions.

The candidates were nervous and their statements stilted - that is how the conservative French newspaper "Le Figaro" described the start of Monday night's televised presidential debate. "All seemed to fear starting off with an irreparable mistake."

There was certainly no shortage of fuel for discussion: accusations of corruption have hung over conservative candidate Francois Fillon's campaign for weeks. National Front party leader Marine Le Pen has consistently provoked her political opponents with rightwing populist statements about the European Union (EU) and Islam. And many eyes will have been on Emmanuel Macron as he asserted himself for the first time in a widely-watched political exchange. The social-liberal candidate and founder of the "En Marche!" (Forward!) party currently leads French opinion polls.

Then the three-hour debate on migration, education, secularism and the French economy finally took off. An average of 9.8 million viewers watched as the five presidential candidates defended their ideas. The viewship numbers were provided by TF1, which televised the debate. The broadcaster said that at one point as many as 11.5 million viewers tuned in.

Le Pen stuck to her standard themes: "protecting borders," "security for all French citizens," and "protectionism." She demanded that, "The French people must reclaim their sovereignty." Le Pen's campaign stands for a return to France's former national currency, the franc, and a referendum on leaving the EU. She used the debate as an opportunity to blame Brussels for "unemployment and poverty."

Candidates clashed with contrasting positions on the subject of economic policy. Fillon criticized Le Pen's calls to abandon the euro - calling her a "purchasing power serial killer." Another confrontation erupted over the issue of working hours, where Fillon and Macron took clear stances in opposition to the leftist candidates Jean-Luc Melenchon and Benoit Hamon, both of whom want a shorter work week.

The return of the burkini

The candidates also revisited a controversial topic that made headlines last year: the burkini. 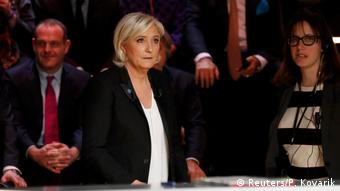 Le Pen went on the offensive: "You, Emmanuel Macron, were for the burkini weren't you?"

To which Macron vigorously countered: "You are lying by twisting the truth," going on to accuse her of "dividing" French society and saying her treatment of the issue had nothing to do with secularism. Macron's measured response regarding France's strict separation of church and state was lauded online.

The terms "burkini" and "concordat" - a contract between the French state and the Vatican - were the most Googled words in France from then until 11 p.m.

When it came to foreign policyit was Melenchon's chance to ruffle feathers, calling for France's withdrawal from NATO and the creation of a "Peace Bloc" with Russia, and also saying that Ukraine's borders must also be "discussed anew." Macron took a clear pro-European stance, calling for closer relations with Germany, even going so far as to praise Chancellor Angela Merkel's refugee policies.

Things could have been much worse for Fillon. Moderators largely avoided the topic of "political ethics," thus sparing the "Les Républicains" (The Republicans) candidate from having to enter the minefield of accusations surrounding payments made to his wife for work it appears she never did. In a statesman-like aside he simply said: "I have faults, who doesn't?"

In the end, Le Pen accused Macron of having talked a lot without having said anything, a jab for which Twitter users gave the far-right candidate debate points.

Nevertheless, the clear winner of a snap post-debate poll was Macron. Some 29 percent of viewers found him to have been the most convincing of the five, followed by Melenchon with 20 and Fillon with 19 percent. Thirty percent of those polled agreed that Macron had the best political program, and 31 percent said that he had the right qualities to be president. He was followed by Fillon with 24 percent and Le Pen with 17 in that category. 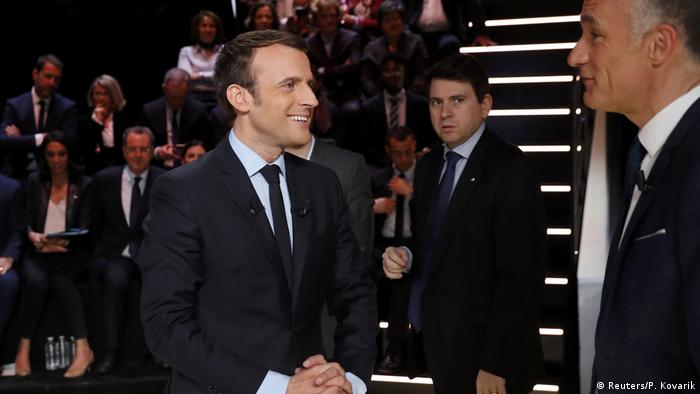 Macron seemed the winner of his first TV debate

The leftist Paris newspaper "Liberation" summed up the candidates' positions as follows: "Far-right populist Marine Le Pen proposes a nationalist, xenophobic and anti-European break. Francois Fillon stands for a liberal and conservative approach reminiscent of Margaret Thatcher. Emmanuel Macron is calling for a form of modern centrism based on social-liberal ideals. And Socialist Benoit Hamon as well as Left Party founder Jean-Luc Melenchon both want a social-ecological turning point and hope to jump start consumption and economic growth." The paper went on to say that, "Voters are thus faced with a fundamental decision that will determine the future of the country."

"Le Figaro" was also of the opinion that differences between rightwing, centrist and leftwing positions had become obvious during the debate. Furthermore, it said the debate had highlighted anti- and pro-European positions. The paper concluded by saying, "The debate was a departure from affairs and a return to content."