Bassem Youssef: Fear has no future 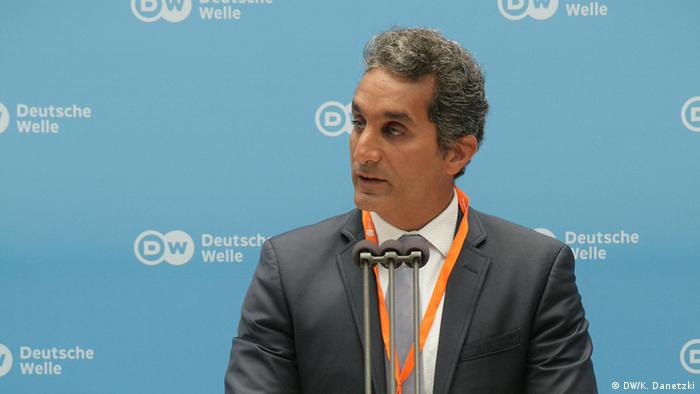 Thank you very much for having me here. It was an incredible journey for me and my team. For us, the show was a bit more than a TV production. It was a human experience. We experienced first-hand the importance of satire in our daily lives. How was this a unique way to express ourselves? Not through violence, not through instigating hate, but through comedy and light-hearted humor - even if that meant discussing the most daunting and controversial political topics. We used humor, laughter and music, to stand for values of freedom, coexistence and to face both religious fascism and false patriotism.

As we did that, we made sure to have fun and to enjoy ourselves. And that always reflected in our work and our audience. And even those who didn’t like our message still made sure to watch us because they still enjoyed the quality of work we were presenting. They would curse us later, but after they had already contributed to our TV ratings, so thank you very much. Egyptians here will relate.

We did all of this for the sake of a different media – a media that respected people’s minds and intelligence and at the same time kept them informed and helped them to combat lies and misinformation that plagued many of the media outlets. As we did that, we never claimed to be freedom fighters or political activists. We believed that it was enough to be the normal everyday people who did not buy into the everyday life of propaganda that is full of lies and deceit.

Satire comes from the Greek word “sarcasmus,” which means “to flesh, to rend, to remove someone’s skin and reveal what’s underneath.” Satire was our weapon to dissect through the lies and rhetoric that were used to control the people. But those who were too annoyed with us and with our message used a different weapon – the most effective weapon of all: fear. Fear sells. Fear intimidates. Fear makes humans go against their best judgment and make them submit to the most basic instinct of all: fear.

We saw how those who hid behind religion to manipulate the masses used fear. We saw how the basic human need to express oneself through logic, laughter and satire were demonized under the pretense that this was against religion, against God. And thus we were deemed unholy, obscene and even a danger to the very fabric of society.

We saw how fear was used by those who used the excuse of national security and the false claims of patriotism to instigate hate and mistrust between people and viciously attack anyone that said anything different, even if it was a joke. And thus we were also deemed unpatriotic, viewed as traitors and considered, yet again, to be a threat to the very fabric of society. We saw how fear made its way through people’s hearts and minds so that even the most ridiculous and illogical claims and conspiracy theories were widely accepted as undeniable facts.

Fear sells. Fear works. Fear makes you get away with anything. And when people are afraid, they will not accept logic, let alone satire. Fear can drive the masses. Fear can turn them into ruthless organisms devoid of human mercy and intellectual logic. Fear can drive humans to give up their best-ever given trait: humanity. Under fear, they accept taking away their rights to object, to oppose, and they even applaud taking away other people’s rights. Under fear, fascism becomes coveted, and human rights become indecent words.

Our job was to expose those irrational fears, to dissect through the unfair use of such human basic instinct in order to give up basic human rights and needs. This might sound strange, but again let me remind you: Fear sells. Fear delivers. Fear is much, much stronger. Fear might be the greatest mover of masses ever. You have experienced this during your history. The world has experienced Nazism, fascism, McCarthyism. All were movements that used fear, xenophobia and empty vicious rhetoric in order to control the masses.

Fear sells. Fear works. Fear is a winner. Satire and comedy might be one of the very few antidotes against fear. It liberates your mind. It sets your judgment free. And that is why it is a threat, and that is why people who use satire will be alienated, marginalized, or even scared off.

It doesn’t matter if it was a government who thinks that they are closer to God than you or a regime that believes that they are more patriotic than you. You, as a satirist, have no place in the world. It is a world where fascism is celebrated and where fear rules. But satire comes to disrupt such an equation. Because when you laugh, you cannot be afraid anymore. And thus the system will make sure to eliminate that powerful weapon of laughter in order for fear to set in.

But maybe there is a small beacon of hope. Maybe change will come from the most unexpected places. The world today is a young world. Youth are connected now more than ever. The Internet and the open skies offer an opportunity that was not there many years ago, when regimes could get away with anything. When we started on the Internet three years ago, we might have been at that time the only ones in our country who did that with such a unique idea and format. But now, the Internet is full of young people coming up every single day to combat fear, intimidation and media deception. We were too big to be allowed to continue. But by the time we were banned, the change had already happened.

Stopping the show might be viewed as a sad ending, but we would like to look at it as a new beginning. We have inspired a whole generation to go out there and express themselves in their own way. The old techniques of the 40s and 50s won’t cut it with those youngsters. The propaganda that worked for their parents’ generation won’t be able to control them anymore.

The plethora of fascism that plagues certain regions on the planet right now is only a temporary and transient moment of time that will be soon washed away by the upcoming generation. Fascism now is so overwhelming that you might think that the long-coveted freedom is stillborn. But that is not true. As Bevan once said, “Fascism is not a new order of society; it is the future refusing to be born.”

But I tell you that the future is already here. It is just warming up.

So fear might sell. Fight might work. Fear might win. But it will eventually face its defeat. And the battlefield for that glorious victory will be no other than the hearts and minds of vibrant, inspired young people who will not give in to fear. Fear can only take you so far. It is unsustainable. It cannot build nations. It only destroys. And if you think that you might win today using fear, well think again, because you are mistaken - because in the books of history, you will lose, and in the hearts of the young, you have already lost.