Basque Terror Group ETA: Decapitated, But Not Dead | Europe | News and current affairs from around the continent | DW | 22.05.2008

The arrest of the alleged leader of Basque terror group ETA has dealt a blow to the organization, but it's unlikely to bring an end to attacks in Spain, according to experts. 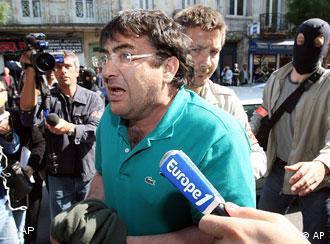 "Long live ETA," Lopez Pena kept screaming as he was led away

Shortly before midnight on Tuesday, May 20, Spanish and French special forces raided an apartment near the train station in Bordeaux. The four people inside it were armed, but had no time to resist arrest.

One of those arrested was Javier Lopez Pena, also known as "Thierry." He'll turn 50 next week and is seen as the head of the terror group ETA. Spanish Interior Minister Alfredo Perez Rubalcaba said that this was "not just another arrest," adding that investigators had caught the person "with the most military and political weight in ETA." Three other high-ranking ETA terrorists, two men and a woman, were also taken into custody.

Javier Lopez Pena is seen as an uncompromising hardliner within ETA. He's allegedly responsible for pushing the organization back to a strategy of terror. According to investigators, he ordered the bomb attack on Madrid's Barajas airport in December 2006 that killed two Ecuadorians.

A string of attacks 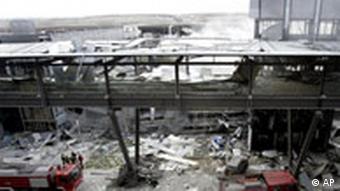 Madrid's airport after the bombing

The attack ended a ceasefire that ETA and the Socialist government of Jose Luis Rodriguez Zapatero had agreed on. Since then, ETA has bombed itself back into the minds of Spaniards.

Two days ahead of the March parliamentary elections, ETA killed a former Socialist city councilman in front of his wife and daughter. Last week, a Guardia Civil police officer died in a bomb attack. ETA had not issued its customary warning ahead of the bombing. And on Monday, ETA exploded a bomb outside a yacht club frequented by Basque entrepreneurs.

"Without a doubt, the arrests are a hard blow to ETA," said Soeren Brinkmann, an expert on Spain at the University of Nuremberg-Erlangen. "But it's not the death blow to the terror organization."

Brinkmann added that he expected more bomb attacks. He believes that ETA used the 2006 ceasefire to regroup and renew its structures.

"ETA presented itself stronger than ever in 2007," he said. 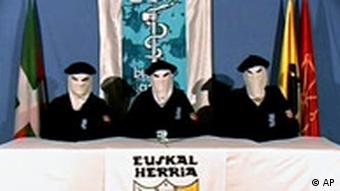 ETA has always managed to regroup

During the 40 years of ETA's existence, people have often talked about a "hard blow" to the terror group. There's a long list of high-ranking ETA members who have been arrested. But new heads kept emerging as old ones were cut off. The one thing that was for certain was that there would always be another bomb.

Ludger Mees, a German professor who has been studying Basque nationalism at the University of Bilbao for years, also doesn't believe the end of ETA is near.

"I'm optimistic, though, because the backing for ETA has radically dropped," he said, adding that even radical Basques no longer believe that it's legitimate to kill for an independent Basque Country.

No time to talk 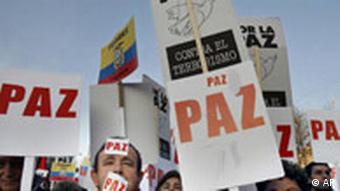 Most Spaniards want peace, but when will it come?

The region will continue to remain the bone of contention for Spain's democracy. The nationalist Basque head of government Juan Jose Ibarretxe wants a referendum in October to decide on Basque Country's right to self-determination. He plans to let the Basque parliament vote on this in June, but even his own party is deeply split on the matter. The central government in Madrid, however, categorically rejects the plan as unconstitutional.

"We will not accept adventures and journeys that lead nowhere," Zapatero said Tuesday after meeting Ibarretxe in Madrid.

The experts don't expect Zapatero to change his anti-terror policies in the near future. He abruptly changed his strategy after ETA ended the ceasefire and has become "less willing to compromise than ever," Brinkmann said.

Basques Hope for Change Despite Setbacks

Statehood remains an elusive goal for Basque nationalists. Yet there's continued hope that they can follow the example of other European countries and find a peaceful resolution to their ongoing conflict with Spain. (01.02.2008)

Spain's ruling Socialists won a second term in elections Sunday, March 9, but they're not in a position to rest on the laurels, says Guenther Maihold from the German Institute for International and Security Affairs. (10.03.2008)