Thousands of protesters have rallied in Paris, demanding reduced jail sentences for members of the Basque separatist group ETA. They say the government needs to make concessions if it's serious about a peace process. 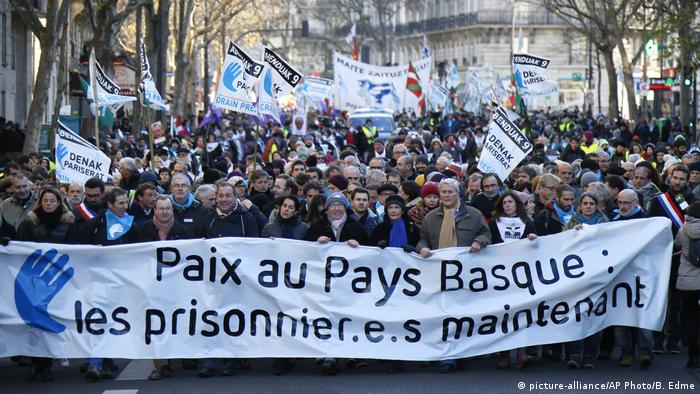 A large crowd amassed in the central Paris suburb of Montparnasse on Saturday, holding banners reading "Peace in the Basque Country," and calling on the French government to send prisoners home.

ETA killed more than 850 people during a bloody, decades-long campaign to carve out an independent Basque state from parts of northern Spain and southern France.

There are currently 305 of the group's members serving sentences for politically motivated terrorism, most of them in Spain. Around 60 are in French prisons. 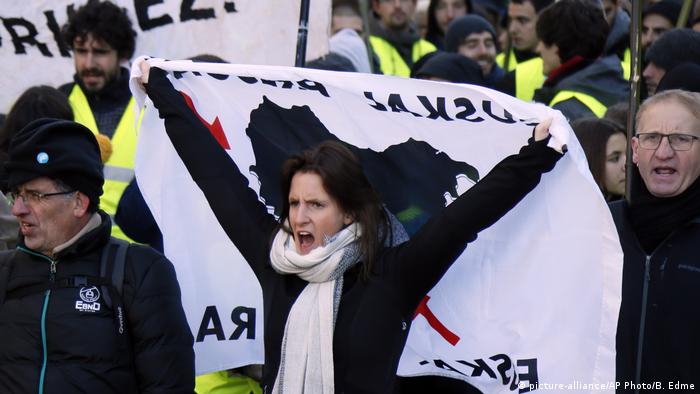 A woman holds a banner reading 'Basque prisoners at home,' during Saturday's demonstration in Paris

Organizers of Saturday's march say they want French authorities to move Basque prisoners serving terms in 20 different facilities — some as far as 600 kilometers (372 miles) from the Basque Country — closer to home, or to the one prison. They're also calling for sick prisoners to be released, and for rules stipulating harsher prison conditions for ETA members to be abolished.

"We're demanding that the common law be applied to Basque detainees," Jean-Rene Etchegaray, the mayor of Bayonne in France's southwestern Basque Country, said. "Why shouldn't the Basque prisoners enjoy the same rights as other prisoners?"

He said more than 10,000 people took part in the Paris demonstration, while police put the turnout at around 6,200.

ETA ended its insurgency in 2011 and surrendered its weapons to the French government in April this year.

Etchegaray told the crowd that "the road to peace is slow, very slow," adding that "the silence" from the governments of Spain and France in the time since ETA renounced its armed struggle was "an insult."

"The peace process cannot continue without a firm commitment from the French state," he said.

He was one of a number of politicians at the march. Socialist presidential candidate Benoit Hamon, who also took part, said now that ETA had handed over its weapons, the French government needed to deliver a response of equal weight.

Victims of the terrorist group ETA say the move to disarm is propaganda, as nationalist parties and associations want an end to the harsh treatment of Basque prisoners. Santiago Saez reports from the Basque Country. (07.04.2017)