Basque militants lay down arms after decades-long terror campaign | Europe | News and current affairs from around the continent | DW | 21.10.2011

The militant Basque separatist group ETA has agreed to end its campaign of violence against the Spanish state, a significant step toward resolving one of Europe's last remaining armed conflicts. 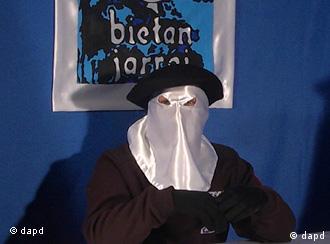 ETA had come under increasing pressure in recent years

The militant group ETA has agreed to lay down its arms after a 43-year campaign of bombings and shootings that took over 800 lives with the goal of securing an independent Basque homeland from Spain and France.

ETA had come under intense pressure from Spanish and French authorities in recent years with nearly 700 of its members put behind bars. The militant separatist group, which is listed as a terrorist organization by the US and EU, was left largely unable to operate with just few dozen inexperienced gunmen. ETA's last attack was a 2006 bombing at Madrid's airport that killed two people.

In a statement, ETA said it had "decided on the definitive end of its armed struggle" while stopping short of dissolving itself as group, a measure the Spanish government has demanded for years.

ETA had increasingly lost its support among the Basque people, a national minority in northwest Spain and southwest France that speaks a language unrelated to any other in Europe. ETA's own political wing, Batasuna, had called on the organization to renounce violence in recent years. 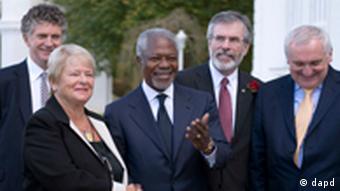 "With the restraint that history imposes on us, we are today living legitimate satisfaction over the victory of democracy, law and reason," Zapatero said.

ETA, however, called for negotiations with Spain and France over the status of the Basque region.

"We have an historical opportunity to find a just and democratic solution for the centuries old political conflict," the group said in a statement. "Dialogue and agreement should outline the new cycle, over violence and repression."

But Popular Party leader Mariano Rajoy, who is favored to become Spain's next prime minister, said security would only come when ETA had ceased to exist as an organization.

"We think this is a very important first step," Rajoy said. "But Spaniards' peace of mind will only be complete with the irreversible disbanding of ETA and its complete dissolution."

International representatives of regions torn by conflict have met in the Basque region in Spain to discuss peace. But there is unease, even anger, among some that the conference took place at all. (17.10.2011)

Spain awaits the end of ETA, a year on from ceasefire

The weakened Basque separatist organization has maintained a truce for the last year, fueling rumors of its imminent disbandment. However, the Spanish political climate means the government is reluctant to negotiate. (05.09.2011)

Spanish authorities have found some 1.6 tons of bomb-making materials this week in raids on the Basque separatist group ETA. The armed separatists had called a cease-fire, but authorities say they remain a danger. (15.04.2011)

A French court did not find enough evidence to uphold Josu Ternera's conviction for membership of ETA between 2011 and 2013. The former separatist leader still has another case to answer to.

Jorge Moreira has been charged with terrorism and murder in Lebanon over his role in bringing ammonium nitrate explosives into the country. The August 2020 blast killed more than 200 people and devastated entire suburbs.

Spanish authorities say that "a certain amount of data" was taken from the phones of the country's prime minister and defense minister through the Pegasus spying tool.