The Basque militant group ETA has decided to disband and end its "political initiative" after a 60-year campaign for independence from Spain. Spanish officials, however, said they would keep pursuing the "terrorists." 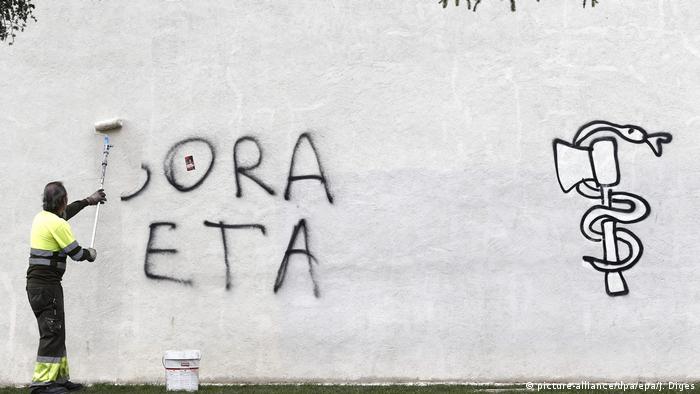 Leaders of the Basque separatist movement ETA said the group had "completely dissolved all its structures" in a letter published on Wednesday in news portal El Diario Norte. The bloody campaign led by the group had claimed over 850 lives in the last 60 years.

The group representing ETA's victims, COVITO, slammed ETA shortly before the latest publication. COVITO head Consuelo Ordonez, whose brother was killed by ETA in 1995, said "the only decent sentence that the terrorists could have uttered starts and ends with, 'We should never have existed.'"

Spanish Interior Minister Zoido vowed to keep investigating unresolved crimes attributed to ETA and going after ts members. "ETA obtained nothing through its promise to stop killing, and it will obtain nothing by announcing what they call dissolution," he told reporters.

Former leader of the Irish Republican Army (IRA), Gerry Adams, praised the ETA move adding it was a "historic opportunity to put conflict aside in that region."

The Basque separatist movement has been winding down its activities for years, but the letter's publication on Wednesday marks a key step to the group's permanent closure. International mediators are working to conclusively end the dispute with Madrid and Paris at an upcoming peace conference on May 4. In its letter, ETA acknowledged its responsibility in failing to resolve the conflict. At the same time, they said the Basque region was "before a new opportunity to finally close the conflict and build a collective future." A 2017 poll found only 14 percent of Basque residents supported indepedence.

ETA to give up their weapons

The separatist Basque movement was created in 1958 as a response to oppression by Spanish dictator Francisco Franco. The group, originally gathering youths close to the Basque Nationalist Party, dubbed its self ETA for Euskadi ta Askatasuna or "Basque Homeland and Freedom" in the region's language.

Despite Franco's death in 1975, the group continued its armed campaign for Basque self-determination and the eventual independence of the region that includes territories in Spain and France. ETA militants conducted numerous bombing attacks across Spain in the coming decades, with over 850 people losing their lives. Spanish authorities responded with a brutal crackdown, setting up death squads to perform extrajudicial killings of ETA members.

The group was weakened in recent years in raids conducted by Spanish and French authorities. Most of its senior leaders were arrested. In April, the ETA asked for forgiveness from the victims who were "not involved in the conflict." However, they said its apology did not extend to "legitimate" targets such as politicians and security forces. Hundreds of crimes contributed to ETA remain unresolved to this day.

Waiting for summit in France

ETA representatives apparently composed the latest letter on April 16 and sent it to various stakeholders in the conflict before making it public on Wednesday. The recipients included the Basque regional government and ex-UN Sectary-General Kofi Annan, who was one of the mediators in the dispute.

The group is expected to confirm its final dissolution in a video to be published on Thursday, according to media reports. A peace conference in France is scheduled for Friday.