Barroso Wants to Delay Decision on EU Constitution | Europe| News and current affairs from around the continent | DW | 10.05.2006

European Commission chief Jose Barroso urged EU leaders on Wednesday to put off any decision on the bloc's moribund constitution until at least 2008. 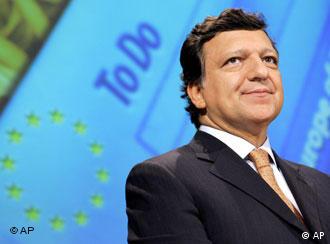 Barroso's call came almost a year into the so-called "period of reflection" about Europe's future announced after French and Dutch voters rejected the EU's planned constitution, throwing the bloc into its worst-ever crisis.

Until then, he called on the leaders to draw up a declaration laying out their vision of Europe's future and commit to fulfilling its goals.

"The first step towards an institutional settlement should be a political declaration adopted by European leaders, not only as a set of principles and values, but also as an obligation to engage and to deliver," he said. "It is important that European citizens know if their leaders

are or not ready to engage, not only about principles and values, but about delivery of those policies," he told reporters in Brussels.

The constitution was aimed at streamlining decision-making in the EU as it expands, but the referendums in France and the Netherlands highlighted public disenchantment with the European project, and notably continued enlargement.

Fifteen members have ratified the constitution, and Finland is likely to do so in July, but it must be adopted by all 25 nations to legally take effect.

A number of countries have frozen the ratification process and France and the Netherlands are unlikely to vote on it again as the text stands.

Barroso complained that EU leaders often commit to action when they hold their summits but never actually provide Europe's institutions with the means to achieve those goals.

"I am challenging national leaders; we cannot go on like in the past," he said. "When national leaders have success, it is their success, but when they suffer a failure, it is Europe's problem."

"We believe this declaration could be an important step to finding the solution and should be signed by the leaders ... and by the commission and the European parliament," Barroso said. "Hopefully this could be done next year -- the 50th anniversary of the Treaty of Rome, the birth of our European community."

He said the text could serve as the basis for future decisions on how to deal with the constitution and would be developed by future EU presidencies.

Flightless EU Constitution Going the Same Way as the Dodo?

Austria's hopes of breathing new life into the European constitution have had cold water poured over them after the Netherlands announced the treaty was "dead." But is the idea really extinct? (Jan. 14, 2006)

Reviving the EU Constitution...Or Not

As the current holder of the EU presidency, Austria has attempted to restart debate about how the stalled EU constitution project should move forward. Where do various member states stand on the document's future? (Jan. 31, 2006)