During his last appearance as US leader at the White House Correspondents' Association dinner, Barack Obama pulled out all the comedic stops. He finished his speech with "a mic drop" and the words "Obama out." 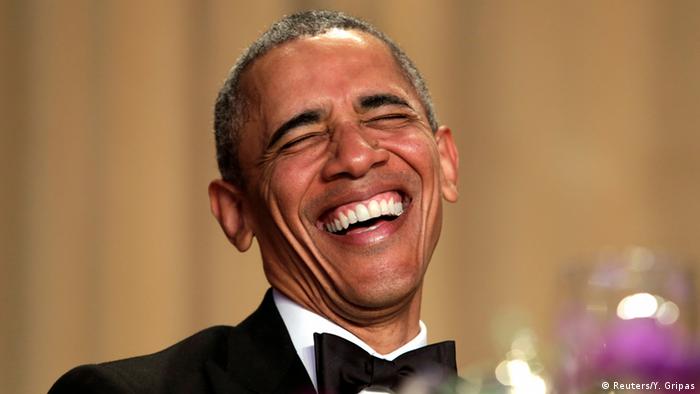 Attending the black-tie event for the last time as US president on Saturday, Barack Obama won a standing ovation for his pun-filled speech, after poking fun at reporters and presidential candidates, as well as himself.

"Eight years ago, I was a young man full of idealism, and vigor. And look at me now: I am grey, grizzled, just counting down the days until my death panel," Obama said, before joking about how his approval ratings have been rising during his final year in office.

"The last time I was this high, I was trying to decide on my major," he said, making reference to smoking cannabis in college.

Easy target Donald Trump also received a roasting from the outgoing president: "I'm a little hurt that [Donald Trump isn't] here tonight. We had so much fun the last time. And it is surprising. You've got a room full of reporters, cameras, celebrities. And he says no. Is this dinner too tacky for the Donald? What could he possibly be doing instead? Is he at home? Eating a Trump Steak? Tweeting out insults to Angela Merkel? What is he doing?" 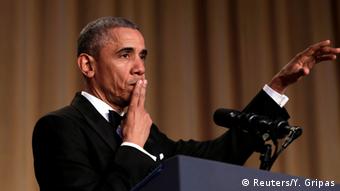 US president Barack Obama closed his speech with a "mic drop"

After coming under fire in several jokes at the 2011 dinner, the Republican White House Front runner said he would not attend this year's event, suggesting that the media would misreport his mood.

The Republican establishment is incredulous, Obama said, that Trump is their most likely nominee. "They say Donald lacks the foreign policy experience to be president. But in fairness he has spent years meeting with leaders from around the world: Miss Sweden, Miss Argentina, Miss Azerbaijan."

Making direct reference to the tone of the Republican presidential race, Obama said: "Eight years ago I said it was time to change the tone of our politics. In hindsight, I clearly should have been more specific."

Obama's puns weren't confined to the opposition, however, with the president also joking about Hillary Clinton's campaign. "You’ve got to admit it though, Hillary trying to appeal to young voters is a little bit like your relative that just signed up for Facebook. 'Dear America, did you get my poke? Is it appearing on your wall? I'm not sure I’m using this right. Love, Aunt Hillary.'"

Wrapping up his speech at his eighth White House Correspondents' Association dinner, the US president said: "And with that, I have two words to say - Obama out," followed by a "mic drop." In pop culture, the gesture has become a way of saying that the performance was so good there is nothing to add.

Obama leaves Europe with promises of security and cooperation

The US president has voiced support for a NATO mission off the coast of Libya to block irregular migration to Italy. He also called for Europe to face its "defining moment" amid a series of political crises. (25.04.2016)

The US president praised Chancellor Angela Merkel as a "trusted partner" and described her handling of the refugee crisis as "courageous." Obama is in Germany's Hanover to talk free trade and security. (24.04.2016)