Police in Bangladesh have charged the owners, managers and security guards of a Dhaka garment factory with culpable homicide. A fire at the factory last year caused the deaths of 112 workers. 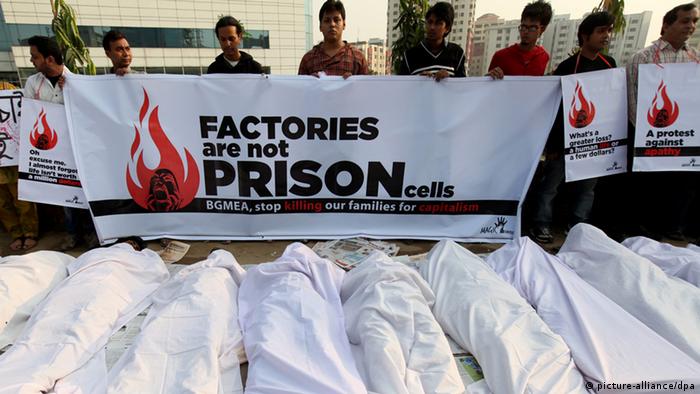 Owners of the Tazreen Fashions factory, Delwar Hossain and his wife, Mahmuda Akter, as well as 11 factory managers, security guards and engineers were charged on Sunday with culpable homicide for alleged negligence leading to the deaths of the workers at the factory on the night of 24 November 2012.

It is the first time authorities in Bangladesh have brought charges of culpable homicide for alleged negligence leading to the deaths of factory workers.

Public Prosecutor Anwarul Kabir Babul said all 13 people could face life in prison if convicted of failing to ensure safety at the sprawling factory located outside the capital Dhaka.

"The managers and security guards misguided the workers by saying that it was nothing but a part of a regular fire drill when the blaze broke out," Babul said. "So the workers went back to work after the fire alarm went off, but they got trapped as the managers locked the gates," the prosecutor alleged.

The factory had no emergency fire exits.

A court will decide on 31 December whether to accept the charges and allow a trial to proceed.

Police investigator Mohsinuzzaman Khan said it was "possibly the first time" a garment plant owner has been charged over a fire at one of the nation's 4,500 factories where accidents are common.

In April of this year 1,135 workers died when the Rana Plaza garment factory on the outskirts of Dhaka collapsed.

Bangladesh is the world's second-largest garment manufacturer after China and earns more than $20 billion (14.6 billion euros) a year from exports, mainly to the United States and Europe. The Tazreen factory made garments for US giant Walmart and Dutch retailer C&A. The victims of the fire were mostly women who were paid as little as $38 a month.