Tens of thousands of protesters have taken to the streets of Bangladesh’s capital city, demanding that atheist bloggers be executed for defaming Islam. Secularist groups have called for a nationwide strike in response. 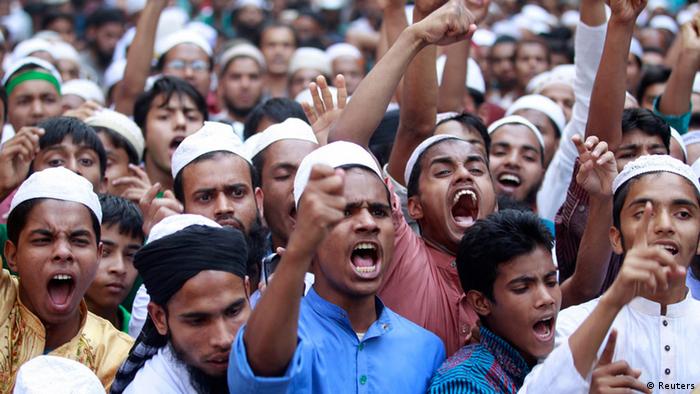 Police said 100,000 people participated in the Islamist protests in central Dhaka on Saturday, during which some demonstrators chanted "God is great hang the atheist bloggers." Protest organizers put the number of participants at 500,000.

As Islamists in Bangladesh gear up for a 'long march' to Dhaka seeking death for 'anti-Islam' bloggers, among other things, many fear the situation in the country could become much more volatile. (05.04.2013)

The Bangladeshi government has arrested four bloggers for allegedly posting anti-Islam remarks on the Internet. Religious defamation carries a 10 year sentence in Bangladesh. A panel composed of intelligence chiefs and other officials monitors the Internet and social media for remarks that they consider anti-Islam.

"I've come here to fight for Islam," Shahidul Islam, an imam at a mosque outside of Dhaka, told the AFP news agency. "We won't allow any bloggers to blaspheme our religion and our beloved Prophet Mohammed."

Tensions have soared between Islamist and secular groups in Bangladesh, since the government put leading members of the country's main Islamist party - Jamaat-e-Islami - on trial for war crimes. The party opposed Bangladesh's 1971 war of independence against Pakistan, which took some 3 million lives.

Last February, thousands rallied in the capital, demanding the death penalty for the suspected war criminals. Jamaat-e-Islami vice president Delawar Hossai Sayedee was sentenced to death on February 28 for murder, rape, looting and forcible conversion of Hindus to Islam during the independence war. At least 95 people were killed in unrest following Sayedee's conviction and sentencing.

Saturday's Islamist protesters accused the atheist bloggers of instigating the previous demonstrations calling for the execution of Jamaat-e-Islami leaders.

"We have called the strike to protest the evil design of the Jamaat party, as they are patronizing the pious Muslims," Nasiruddin Ahmed Yusuf, a filmmaker and organizer of the civic groups' protest, told the news agency DPA.