Bangladesh: Gang violence in Rohingya refugee camps prompts fear | Asia | An in-depth look at news from across the continent | DW | 26.10.2021 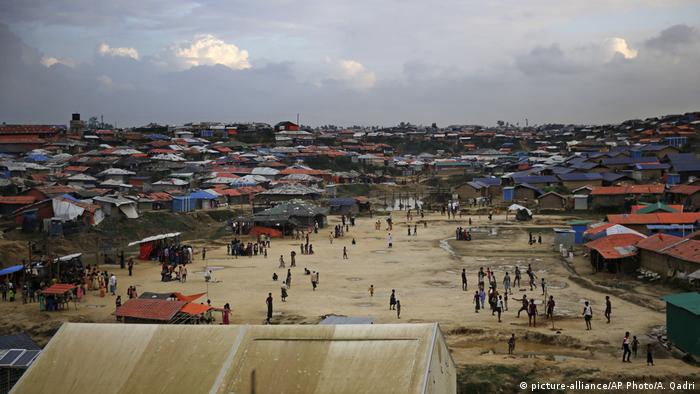 At least six people were killed and 20 wounded in an attack at a Rohingya camp in Cox's Bazar on Friday, police said — the latest incident of violence in the refugee settlement.

The gang shot and stabbed people attending an Islamic school in the camp, killing three teachers, two volunteers and a student, according to police.

In September, the murder of a prominent civilian Rohingya leader exposed growing conflicts among armed criminal gangs inside the sprawling settlements.

Mohibullah, 48, was killed in his office by unknown gunmen in a camp. The teacher had become a leading voice for the stateless community, uniting refugees to return to Myanmar if the Buddhist-majority country offered them citizenship. The attackers are yet to be identified.

Conflicts within the camps have taken the lives of at least 89 Rohingya since the mass exodus in August 2017, when more than 730,000 Rohingya fled from Myanmar's Rakhine State to neighboring Bangladesh following sweeping military retaliation to attacks by Rohingya insurgents on police posts and an army base.

A further 109 refugees, who were allegedly involved in drug trafficking, were killed by Bangladeshi security forces in the so-called crossfires in 2018.

Bangladesh has been considered a safe haven for many Rohingya Muslims who have sought refuge to save themselves from the crackdowns launched by Myanmar's security forces. The Buddhist-majority country doesn't recognize the minority group as citizens and limits their freedom in the country.

But in June, Bangladesh Prime Minister Sheikh Hasina said Rohingyas were increasingly "posing a huge security threat to Bangladesh as well as the region."

'Only a small part is involved'

Nur Khan, a human rights activist who has been monitoring the security situation in Cox's Bazar, says the main forms of criminal activity taking place in the camps include drug trafficking, human trafficking and abduction.

He thinks at least three armed Rohingya criminal gangs are currently fighting for control of the camps in Bangladesh.

"Although the conflicts have been taking place inside the camps so far, it could spread outside in the future," Khan told DW.

"These armed groups might try to buy arms from local and international traffickers through sea routes, which could deteriorate the security situation in Cox's Bazar drastically," he said, adding: "They might even sell some of those arms to local Bangladeshi criminals."

As the country's security forces have intensified operations inside the camps to crackdown on armed groups, Khan fears criminals might attack in retaliation.

"I have seen some online messages of the criminal groups where they have shown interest in attacking the Bangladeshi security forces, something that has never happened in the past," he underlined.

But the human rights activist stressed that "only a small" group of Rohingya refugees with past criminal records were involved in the conflicts.

While there has been no sign of Rohingya refugees getting involved in terrorism or linking themselves with Bangladeshi or transborder extremist religious groups, some have expressed concerns the situation could change in the future.

"Unfortunately, in South Asia, it's not unheard of for refugees to be accused of involvement in terrorism. This allegation has been used against Afghan refugees in Pakistan, and in India, Muslim migrants have been viewed as security threats," Michael Kugelman, a South Asia expert at the Washington-based Woodrow Wilson Center for Scholars, told DW.

Kugelman thinks some Rohingya refugees may have been "radicalized" by their horrific treatment at the hands of the Myanmar military, but says it's a tiny minority.

"Most Rohingya refugees, and especially those in Bangladesh, are more concerned about survival and providing for their families than about plotting violent attacks," he added.

A Rohingya expert who wished to remain anonymous told DW refugees "know very well" that any "wrong move" in Bangladesh could jeopardize their "safe haven."

"I haven't seen any activity by refugees in Cox's Bazar that could suggest they have an interest in terrorism or extremism in Bangladesh's territory. Therefore, I don’t think that they could become a security threat to Bangladesh and the region," the expert told DW.

Bangladesh has spent a fair amount of money on improving conditions for Rohingya refugees, including on the isolated island of Bhashan Char where many have been sent in recent months.

"My sense is that to improve its global image, which has suffered in recent years as it has taken an authoritarian turn, the Bangladesh government is keen to project a humane and soft side through its treatment of Rohingya on its soil," Kugelman said.

"That's why we're not seeing Dhaka take a more muscular and aggressive position on the Rohingya, even as it has cracked down relentlessly against the political opposition and dissent," Kugelman said.

But as Bangladesh increasingly struggles to manage its refugee influx, it appears Dhaka is taking a turn.

"We've sheltered them on humanitarian grounds but such a huge population can't be lodged for an indefinite period … I ask the world community to assist us in dignified and peaceful repatriation of the Rohingyas," the Dhaka Tribune, an English-language Bangladesh newspaper, quoted Hasina as saying in a pre-recorded speech at the IX Moscow Conference on International Security in June.

The military coup in Myanmar has drawn condemnation from Rohingya refugees living in camps in Bangladesh. Many of them are now more fearful to return to their homeland, but some remain hopeful.

Rohingya refugees in Bangladesh who were relocated to a flood-prone island say they haven't received the benefits they were promised when they agreed to move.