Bangladeshi police have arrested one of the four owners of a ferry involved in a massive fire in which at least 39 people died. Seven other people, including owners and captains of the vessel, are on the run. 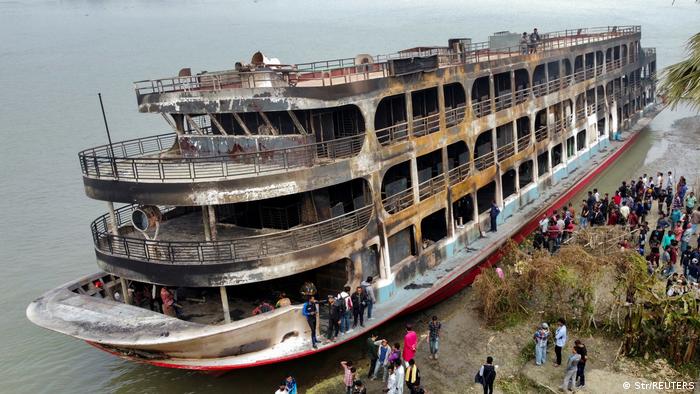 Police in Bangladesh on Monday arrested one of the owners of an overcrowded ferry that caught fire last week, leading to the deaths of at least 39 passengers.

The owner is one of eight people sought by investigators after Bangladesh's shipping directorate filed a case against them, accusing them of disregarding safety regulations. The other seven remain at large.

Officials say the three-story ferry was carrying at least 700 passengers when the fire occurred, well in excess of its permitted capacity of 420.

What happened in the fire?

The ferry, the MV Abhijan-10, caught fire on Friday in the middle of the night on the Sugandha River in Jhalokathi district, nearly 150 kilometers (90 miles) southwest of the capital, Dhaka.

A number of people burned to death and others died from drowning after jumping into the river to escape the flames. Nearly 100 more needed hospital treatment for burn injuries.

A search was still going on for 29 passengers who are unaccounted for, according to Zohar Ali, chief of the district administration.

Marine police officer Mahbubur Rahman told the AFP news agency that the vessel did not have enough fire extinguishers and buoys and that action had not been taken soon enough.

"We spoke to the survivors and they said the driver of the ferry kept the vessel moving for nearly an hour after its engine room caught fire," he said. "Had they stopped the ferry and anchored immediately, it could have saved all these valuable lives."

Deadly accidents involving ferries are a regular occurrence on Bangladesh's many rivers. Most are attributed to a failure to observe safety regulations.