Coronavirus in Bangladesh: How can religion help? 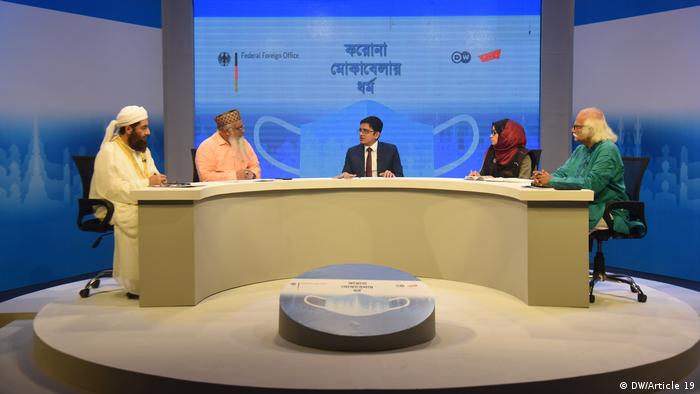 Representatives of various religions, as well as an Islamic women's rights activist, took part in a talk show organized by DW in Dhaka to discuss how religion is providing positive impulses to cope with the coronavirus pandemic in Bangladesh.

Social distancing, hygiene and helping those affected are important religious duties during the crisis, the panelists said. And the health emergency affects everyone regardless of what they believe, they added.

In the first week of March this year, Bangladesh recorded its first COVID-19 infection. The country has so far registered nearly 400,000 cases, with over 5,500 related deaths. After the onset of the pandemic, for a brief period of time, religious prayers in the predominantly Muslim society were confined to people's homes.

At the beginning, people were confused and scared, the panelists noted. This made it difficult to implement health regulations at the time, said AKM Shamsuzzaman, the director of the Bangladesh's National Institute of Laboratory Medicine and Referral Center.

Mufti Waliur Rahman Khan, one of the clerics of the top government religious body, the Islamic Foundation, echoed a similar view. 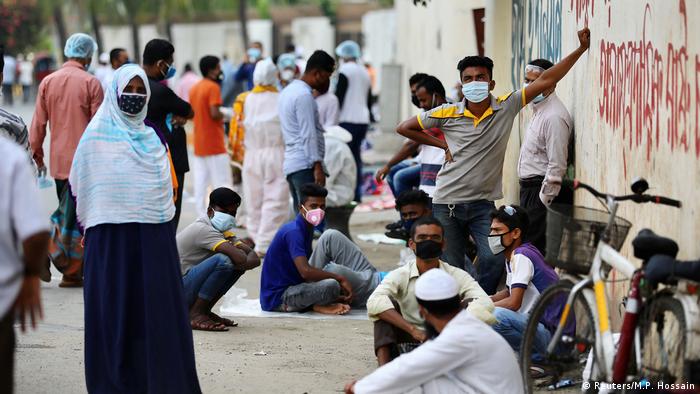 Bangladesh has so far registered nearly 400,000 cases, with over 5,500 related deaths

The role of Islam

"In the villages, people were so scared that they started to visit mosques more frequently than before," Khan said. "We fought this with moral education and motivation."

He showed the panel a model of a poster, which was printed with a statement from the Prophet Mohammed calling for action during pandemic times.

Khan said they have distributed such posters in mosques across the country to avoid misinformation being spread by some local Islamic preachers who have mocked pandemic-related restrictions on public gatherings or opposed the closing down of mosques.

"We control almost 300,000 mosques throughout the country. We can pass on information to them in an hour's notice," Khan noted. He said that they use WhatsApp groups to deliver instructions or messages from the Ministry of Religious Affairs.

Khan also said that they have formed a committee of top Islamic leaders, from various sects, to find solutions to issues of religious nature during the pandemic.

The pandemic has highlighted the critical role women play in public health, said Azizun Nahar, an assistant professor of law and human rights at Asia Pacific University in Dhaka. Women bear the brunt of the burden as they make up the majority in the healthcare system, she stressed.

"About 70% of the workforce in the health sector are women. That means when people were scared and confined to their homes, these women came out to fight the coronavirus," Nahar told the panel.

She also mentioned examples from Islamic history where women have worked in the battlefields as doctors or medical workers. "Women did similar jobs even 1,400 years ago," she said.

Kajal Debnath, a member of the Bangladesh Hindu Buddhist Christian Unity Council, pointed out that most of the nurses are from Hindu, Christian or other religious minority groups. "I will say no, they were not stopped in the name of religion," he said.

"To the extent Bangladesh is thought to be conservative, or stuck in compartments of religious disciplines, our girls have shown revolution," Debnath added.

Commenting in a video clip shown in the TV show in which an Islamic initiative offers help with the burial of coronavirus victims, regardless of the religious community, the panelists reaffirmed the appeal to face the challenge together and across all religions.

The panel discussed other such initiatives and criticized those who tried to misuse religion during the pandemic.

"When you talk about religion there will sometimes be debate," Debnath underlined. "The important thing is that positive forces have prevailed over the negative ones."

It's not that there were only people who opposed these activities, in fact there were many who support such initiatives, Nahar said, adding that it's because humanity always prevails over the religious identity of people.

"These people came to help, out of their love or empathy for humanity. Ultimately the support for noble causes comes from within the society," she said.

The talk show, "religion to fight coronavirus," was moderated by the head of DW's Bengali service, Khaled Muhiuddin, and was aired on Friday by the Bangladeshi TV channel Channel I.

The project was funded by the German Foreign Office, and jointly organized by DW and the regional chapter of the international human rights organization ARTICLE 19, which campaigns for freedom of expression worldwide.

Coronavirus: Economy down, poverty up in Bangladesh

The global health crisis caused by COVID-19 has hit Bangladesh's economy hard and jeopardized the country's impressive achievements in poverty reduction. Against this backdrop, Dhaka is set to announce its annual budget.

Reporting the coronavirus at a Rohingya camp: 'Saving lives is now the most important task'

A community radio station is working to inform the Rohingya in a refugee camp in Bangladesh about the coronavirus through reports over the loudspeaker and special broadcasts. The production conditions are a challenge.