Ballack in London: From Wild Acclaim to Crunch Talks on Future

When Michael Ballack signed for English champions Chelsea last May, he was expected to put the finishing touches to a squad of world-beaters. By April 2007, Ballack was in the dock and Chelsea's season in tatters. 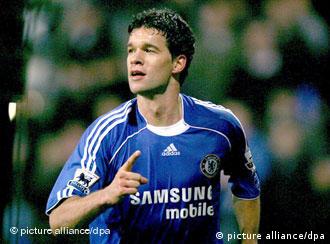 Michael Ballack in Chelsea blue: A man for all seasons...or just the one?

It all began with great expectations and ended in a blaze of recriminations and showdown talks. Michael Ballack's first season in London with Chelsea came to a premature halt last month at a stage when the Premiership, Champions League and FA Cup were all still up for grabs.

The Germany captain chose to have an unauthorized ankle operation in late April at a time when the season reached its climax and was absent as Chelsea crashed out of the European Cup and lost their league title to Manchester United all in the space of a week.

Ballack's transfer was supposed to be one of the last great pieces needed to complete Chelsea's world domination jigsaw puzzle. But the signature of the former Bayern Munich midfielder, along with the other high-profile summer signing of Ukrainian Andriy Shevchenko, was this week being implicated in the collapse of the London club's season.

Analysts and critics pinpointed the inability of Chelsea's newest Galacticos to fit in with an already awesomely successful system and tight-knit family of players as one of the main reasons why Jose Mourinho's team failed to capture the most significant silverware on offer.

But was Ballack's first season in England really such a disaster? Compared to the shocking form of Shevchenko, it could be said that the German was a resounding success.

Considering it was his first season in a new country, one whose press had condemned him as an expensive flop before a ball was even kicked, Ballack soon became a mainstay of a team that will finish second in the league, reached the Champions League semi-finals and the FA Cup final and won the League Cup. His coach even referred to him as one of Chelsea's "untouchables" – that is before Ballack decided to have medical treatment without Mourinho's permission. 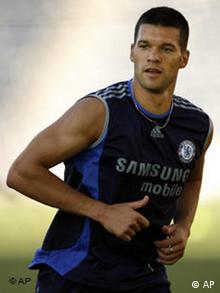 Ballack's future at Stamford Bridge is in doubt as Mourinho is not thought to have directly sanctioned the micro-surgery the Germany captain had, but Ballack is determined to stay at the club and has blamed the club's medical department for the dispute.

It is understood Ballack has claimed Chelsea's experts missed a problem of a small loose bone above his ankle after he damaged it at Newcastle last month. He traveled to Germany to consult national team doctor Dr Hans Muller Wohlfahrt who recommended immediate action.

A statement from the German Soccer Federation (DFB) supported the decision: "An immediate operation was necessary and indispensable. Wohlfahrt detected lose splints in Ballack's left high ankle. Any further practice session or another game potentially could have endangered the player's health, even threatened Ballack's career."

Now, with Ballack locked in talks with the Chelsea hierarchy over his future at the club, it seems that an autopsy of the dethroned champions' season will also include a report on the Germany captain's contribution to it. 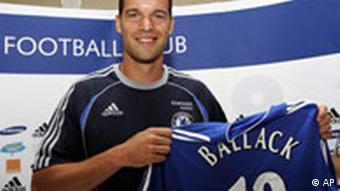 Unlucky for some: Ballack and favored no. 13 shirt

Germany captain Michael Ballack enjoyed great success at Bayern Munich in his four years with the club. He won three Bundesliga titles and three German Cups. But as his contract ran down, he refused to sign an extension and made it known he was looking for pastures new.

Chelsea sign the three-time German Footballer of the Year on a free transfer from Bayern Munich in a three-year deal. Coach Jose Mourinho says: "Chelsea is very happy and we think English football should be very happy Ballack plays for Chelsea and plays in the Premiership. A champion is coming here to help follow our target for next year."

Ballack shines as Germany make it to the semi-finals of the World Cup on home soil. He leads his country to third place after losing to eventual champions Italy and beating Portugal in the play-off game. He fails to score but his midfield performances bode well for Chelsea. Ballack plays his first game for his new club in Los Angeles during Chelsea's pre-season tour of the United States.

The Premiership season gets underway with the traditional Community Shield game between league champions Chelsea and FA Cup winners Liverpool. It starts and ends badly as Ballack is booked and then limps off with a hip injury after just 26 minutes. Liverpool win the match 2-1. Ballack recovers and makes his league debut in the 2-0 win against Blackburn Rovers on Aug. 27.

Ballack scores his first goal for Chelsea in the 2-0 Champions League win against Werder Bremen. A month of firsts continues when he receives the first red card of his career as Chelsea beat Liverpool 1-0 at Stamford Bridge. Despite earning a reported 192,000 euros-a-week ($260,000), Ballack goes public with his surprise at London's property prices. Chelsea take pole position in the league for one week before the 1-1 draw with Charlton sees them drop to second behind Man United.

Ballack returns after his ban for the 1-0 Champions League victory over Barcelona and scores his first Premiership goal in the 2-1 win over Portsmouth. He follows that up with another in the 2-0 win against Sheffield United.

Ballack's return to Germany is an unhappy one as Werder Bremen gain revenge in the return Champions League game, beating Chelsea 1-0 in the Weserstadion. Ballack scores the only goal in the 1-0 Premiership win over Bolton Wanderers.

Ballack suffers a bleak mid-winter despite Chelsea going unbeaten during December. Ballack is increasingly criticized by the English press and a section of the Chelsea faithful for his perceived lack of effort.

Chelsea begin a winning streak which sees the team go two months without conceding a goal as they chase league leaders Manchester United. 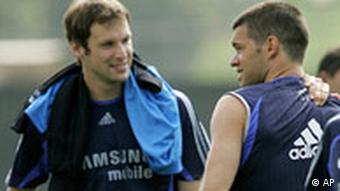 Ballack's comments about his colleagues didn't go down well

However, not everyone is happy: Ballack's form hits a real low during the 2-0 defeat to Liverpool at Anfield that precedes the unbeaten run. The game passes him by and he's accused in the English press of going missing in the big matches.

He then blames Chelsea's style of play for his own lackluster performances over the past two months. "I would have hoped there would be more crosses in the air for me to score from. At Munich the tactics were similar but there were far more crosses." He also accuses his teammates of giving the ball away too often

Increased tabloid criticism of Ballack's perceived inability to form a successful midfield partnership with Frank Lampard prompts the German to respond. "I've found my role and I'm getting enough acknowledgment, above all from coach Jose Mourinho. I talk to him a lot," he told reporters at an international training camp. "Frank plays his game and I play mine," Ballack said. "We get on well with each other." As if to emphasize the point, Ballack and Chelsea win the first silverware of the season in the 2-1 League Cup victory over Arsenal.

Ballack ends his lean spell in the Champions League by scoring the winner which takes Chelsea past Porto and into the quarter-finals. He also ends his four-month Premiership drought by scoring the last goal in the 3-0 rout of Sheffield United. 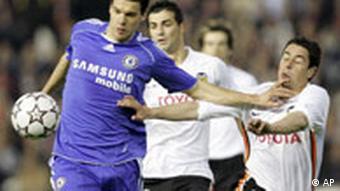 A big month for Michael: Chelsea beat Valencia in the Champions League quarter-final over two legs to set up a semi-final clash with Liverpool. Ballack scores the goal in the 1-0 win over Blackburn Rovers that takes Chelsea into the FA Cup Final.

In the league, he injures his ankle against Newcastle and opts to have treatment in Germany. His absence angers Mourinho who sees his team crash out on penalties to Liverpool in Europe and draw two league games which cost them the title. The ankle treatment row rumbles on and Ballack is called in for crunch talks. Depending on his recovery and Mourinho's ire, Ballack could still face Manchester United in the FA Cup Final on May 19.

Ballack Scores in Debut with Chelsea

Michael Ballack had a winning debut on Tuesday as a new member of Chelsea FC, against Bundesliga team Werder Bremen. (13.09.2006)

Germany captain Michael Ballack admits he's still coming to terms with his new life in England with Premiership champions Chelsea and revealed that he's still living in a hotel as he searches for a house in the capital. (04.09.2006)