Bad attitudes run throughout the worst Bundesliga 11 of 2010

Some players just can't help it. They're not very good. Others combine poor performances with delusions of grandeur and animosity toward the world. Deutsche Welle identifies the worst offenders. 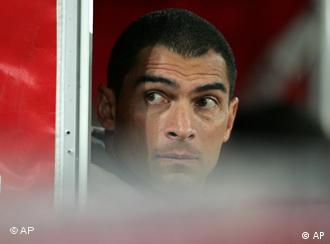 When the going got tough, Cologne's Mondragon just left

Many players pitch a hissy fit if they get benched, but ex-Cologne keeper Faryd Mondragon took his tantrum to a previously unknown biblical level. Having been relieved of his starting role for poor performances and absence due to international duties, the Colombian refused to play at all, and then held a press conference comparing his martyrdom to that of Jesus. Cologne are apparently non-believers, shipping the malcontent messiah to Philadelphia Union in the MLS. Cologne fans will be happy that Faryd is Mondra-gone.

Among the poor defenders, one particularly stands out. Germany's leading football magazine, kicker, has ranked Bremen's Mikael Silvestre the worst player in the entire league, and he was a consensus choice for that distinction among the Deutsche Welle sport brain-trust as well. The Frenchman tries hard, but is clearly past his prime and was one major reason for Bremen's sputtering start. 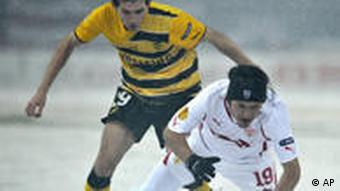 Paired with him in our porous central defense is Gladbach's Anderson. The 22-year-old Brazilian was a major signing for the Foals this summer, but he has "led" his new club to a truly laughable record of 47 goals conceded. As DW Sports writer Nick Amies succinctly put it..."atrocious."

On the flailing flanks, we have Hamburg's Guy Demel. Once a mainstay in Northern Germany, the Ivorian has become, in the words of DW Sports editor Matt Hermann, "a walking lapse in concentration." And not only has Hamburg coach Armin Veh removed him from the starting line-up. He didn't even make the bench in his club's last match of the year.

Joining him is Bremen's Petri Pasanen. Hamburg's arch-rivals have always conceded lots of goals for a top side, but this year, the problem is worse than ever. Bremen's goal difference is a lousy -12. Opponents encounter little resistance on the wings, and the Finnish veteran has simply not been up to the job. The problem for Bremen is that no one else has been, either. 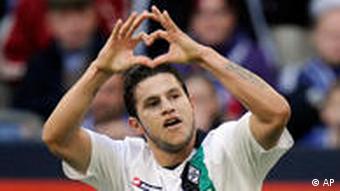 Bobadilla may love Gladbach, but he hasn't done them any favors

Among the candidates put forward for the middle of the pitch were Bremen's Marko Arnautovic and Bayern's Franck Ribery, but injuries have somewhat mitigated their poor production. Still, our mediocre midfield features some big names.

Stuttgart's Mauro Camaronesi has had a lot of highlights in his career, including winning the Italian league title and the World Cup. But he'll want to forget his time at Stuttgart thus far. Brought in to great hoopla in the summer, he can't even make the starting line-up of a team that's wintering in the drop zone.

Matt put forward Wolfsburg's Josue, a former team captain relegated to the bench, but DW Sports writer Jefferson Chase overruled him in favor of the Wolves' Diego. When you pay some 18 million euros for a star with a history of excellence in the Bundesliga, you expect more than a handful of goals with the odd assist thrown in. The Brazilian is also hot-headed and is very lucky not to have gotten sent off this season. Value for money is something else.

Another playmaker who's not making the grade is Gladbach's Juan Arango. Two goals, three assists and one very foolish red card that cost the Foals a chance to get much needed points against Hoffenheim are the Venezuelan's sad balance sheet. As Nick succinctly put it..."atrocious."

And lest anyone think we're picking on foreigners, completing our flailing foursome is Bremen's Aaron Hunt. The German youngster was charged with replacing Mesut Oezil this season, and he simply hasn't been able to. This may not be entirely his fault, as he was originally a wing striker and some problems adjusting to a new role could have been expected. But one thing is already clear: a playmaker, he is not.

As everyone knows, strikers run hot and cold, so one player scoring more or less than another is often just a reflection of luck and form, and not a fundamental difference in quality. In order to make the DW Sports Worst Eleven, a forward had to do more than just not score. He had to kick up a stink in the process.

For that reason, Schalke's Edu gets a free pass, despite being nominated by Matt. Ciprian Marica, who earned a three-match ban late on, when Stuttgart really needed him, attracted Jefferson's ire and almost earned a spot in the Hall of Shame. But he still came up short.

That's because Matt made a persuasive argument for Hamburg's Paolo Guerrero, calling him "among the most delusionally self-important players in the league." Rarely have fans been treated to so much pouting and gesticulating from a player who has a grand total of two goals to his credit after 17 games. Hamburg had great hopes for the Peruvian when they brought him from Bayern in 2006 - three-and-a-half years on there's little doubt that he's not going to fulfill them.

But even Guerrero couldn't top the histrionics of Gladbach's Raul Bobadilla. Apparently after taking anger-management lessons from Diego Maradona, the Argentinian went on a rampage in the Foals' match against Hanover in early December. Although his team were leading, Bobadilla was so incensed in the first half that he lashed out physically at an opponent and verbally at an official, earning himself a straight red. Gladbach went on to lose the match, and Bobilla has been suspended indefinitely. Not what your team needs in the struggle against the drop.

Having fired Jens Keller after only 60 days in charge, Stuttgart are rolling the dice again with Bruno Labbadia, formerly of Leverkusen and Hamburg. But can he handle the toughest job in German football? (13.12.2010)

FC Cologne and Borussia Moenchengladbach are both off to disastrous starts in the Bundesliga. One has panicked and fired its coach, the other plans to stay the course. (25.10.2010)

Werder Bremen have gone from heavyweights to sparring partners

For years, Bremen have been a model of consistency, stability and harmony. But with this season already a likely write-off, even hardcore fans are calling for some major changes on the River Weser. (09.11.2010)