Back to school in the US: Safety first as children go back to class | Americas| North and South American news impacting on Europe | DW | 04.09.2018

Back to school in the US: Safety first as children go back to class

In many countries the start of the new school year is a cheerful and exciting time for children and parents. But after a slew of school shootings in the US, many parents also face the day with mixed feelings. 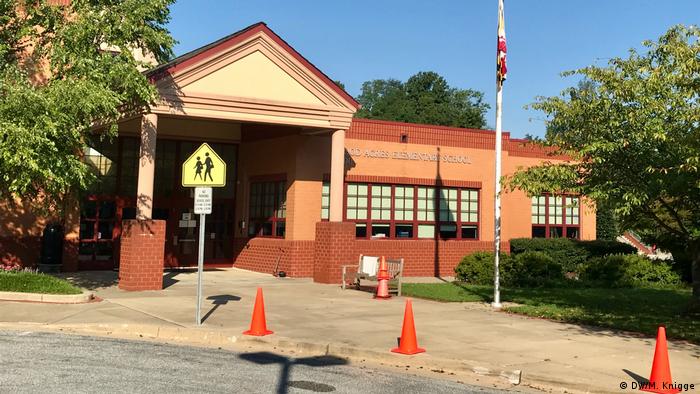 Having dropped off his third-grader at Wood Acres Elementary School, CJ Wooters, his son's electric scooter in tow, heads back home on this hot and humid Tuesday that marks the beginning of the new school year in Maryland.

Wooters jokes that his son refused to start his first day back in school without his scooter, but that he must now haul it back home. He's in a good mood, like most parents chatting outside this local public elementary school in Bethesda, a suburb of Washington, D.C. And with good reason: after a summer break of almost three months, it's finally time for the kids to get back into the school routine.

The long break has given parents and children across the country a respite from an issue they were forced to deal with repeatedly during the previous academic year: a slew of high-profile school shootings with numerous fatalities.

Both sides protest at NRA HQ

Dialogue at gun protest, but neither side budges

'It happens, it's a real thing'

While the issue of school safety may have slipped from many people's minds during the summer break, it has never gone entirely away for parents. The start of school pushes it back into the forefront, says Wooters. 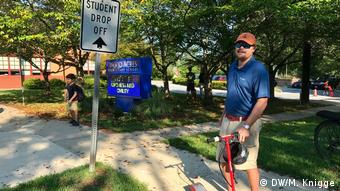 Wooters is glad his son's school has taken precautions

"Nobody wants to think about anything bad ever happening to their kids. But it happens, it's a real thing," he tells DW.

Last year's deadly school shootings in places like Parkland, Florida, where a gunman killed 17 people, and in Santa Fe, Texas where 10 people were killed, have ignited a heated national debate about school and gun safety that included a call from President Donald Trump to "harden" schools and arm teachers.

With the debate about how to better protect schools ongoing without a clear solution in sight, individual schools and school districts have taken their own steps to increase safety. "I know this school has taken precautions and runs drills and all the rest of that stuff," says Wooters, who adds that he always makes sure to let his children know that they are safe with him and in school and that they know how to reach him.

"Do I think it's a little crazy that we have to worry about that as we drop our kids off?," he asks. "Absolutely."

Read more: US students call for end to gun violence on Columbine anniversary

'Something you fear every single day'

To avoid frightening her second-grader with reports of gun violence and school shootings, Rebecca Rojas tries to block out the news. 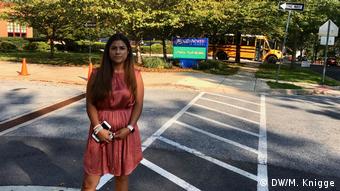 Rojas tries to keep her daughter away from media

"I really try to avoid media, because she really pays attention and gets scared," she says after dropping off her daughter at Wood Acres.

While Rojas worries constantly about the safety of her child, she does her best not to let her worries overwhelm her.

"Of course it's something you always fear every single day," she says. "It's always something that frightens you, but I can't really drop off my kid saying this might happen, be careful. It's not human, it's not life."

Asked what she thought about the proposal to arm teachers, Rojas says she is completely against it. Instead of spending money on that, she thinks officials should raise the salaries of teachers instead.

Pina Bellafiore, who has a 10-year-old daughter at the school, also thinks arming teachers would do more harm than good.

"I am not a big gun proponent, especially in the school setting," she tells DW outside the school. "I feel like it's more accident prone than defending children and protecting." 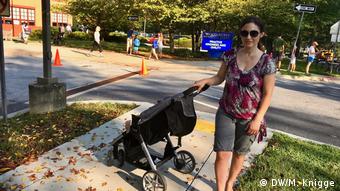 She also doesn't believe bulletproof backpacks, advertised and offered in stores for students, are a solution. "Giving them a bulletproof anything is just like a Band-Aid on a big wound that is going to gush open again," she says.

Bellafiore is convinced individual measures or efforts won't curb America's gun violence epidemic. She views it as a much bigger societal problem that will be difficult to solve.

Still, she admits, "every time you get that email and you hear what they are doing if something were to happen, your heart kind of just thinks."

'March for Our Lives': Rallies around the world call for stricter US gun control

Protests calling for gun control have been held across the US, with solidarity marches also taking place around the world. The "March for Our Lives" movement began after February's school shooting in Florida. (24.03.2018)

Two families have filed separate suits against the "Infowars" radio host, who claims the 2012 school shooting was a hoax. Jones has faced similar suits in the past concerning conspiracy theories he champions. (17.04.2018)