At least 39 people had died in the apparent gas explosion that tore through an apartment building in Russia's Magnitogorsk, officials said. Rescuers found six survivors, including a baby, in the days following the blast. 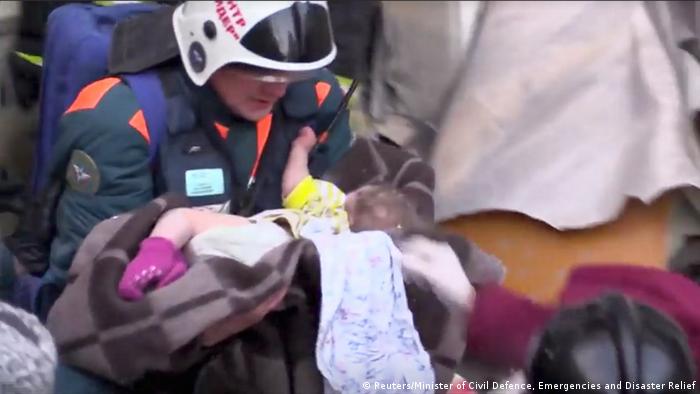 Rescue teams have completed search operations after finding 39 bodies at the site of , the Monday blast in Magnitogorsk, Russia's Ministry of Emergencies said on Thursday. Two people are still considered missing.

On Tuesday, rescuers found a baby after they heard cries from the rubble of the complex, some 35 hours after the apparent gas blast.

The 10-month-old infant, named Ivan, had survived overnight temperatures that fell as low as minus 27 degrees Celsius.

"The child was saved because it was in a crib and wrapped warmly," the Interfax news agency quoted regional governor Boris Dubrovsky as saying.

Read more: Russian baby tourism in US is big business

Crews had temporarily halted their search operation while a team tried to stabilize or remove sections of the building that were in danger of collapse. Footage showed the rescuers slowly prizing apart concrete panels to pull the child from the ruins.

The boy's mother, who had also survived the collapse, was reunited with him at a local hospital.

The Russian health ministry said the boy was suffering serious frostbite, a head injury and multiple leg fractures. He was expected to be transferred for further treatment in Moscow.

Only six survivors have been found, including the boy and his mother.

The regional emergency ministry said earlier on Tuesday that 37 of the building's residents had still not been accounted for. Hope of finding more survivors has been diminished by the harsh cold.

Russian President Vladimir Putin rushed to the scene on Monday, as the country geared up to ring in the New Year.

"It is in the character of our people, despite the New Year's festivities, to remember to think of the dead and wounded at this moment," Putin said.

Regional governor Dubrovsky declared a day of mourning on January 2, with flags lowered and events canceled. Investigators have launched a criminal probe into the collapse. Russian officials have  started paying out compensation to victims of the Magnitogorsk explosion, handing out over 5.2 million roubles, ($755,000 €665,000) to first 24 claimants on Thursday.

The fire broke out at a depth of 340 meters when the construction workers were installing a concrete line in the mine. Officials have denied initial reports of a methane explosion as a possible cause of explosion. (23.12.2018)

The long-serving governor of Russia's Kemerovo region, Aman Tuleyev, has resigned after a fire in the regional capital killed scores of people. He said he could no longer continue his work with "such a heavy burden." (01.04.2018)