German Economy Minister Sigmar Gabriel has warned US and EU officials negotiating a free trade deal that Germany will not accept cuts in social and environmental norms. "Blind privatization" was untenable, he said. 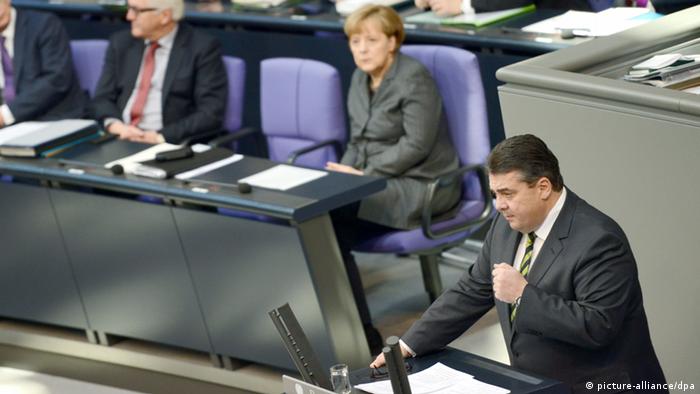 Germany's Vice Chancellor and Economy Minister Gabriel told the national Bundestag parliament on Thursday (pictured) that the mooted Transatlantic Trade and Investment Partnership (TTIP) being negotiated by the US and the EU must not degenerate into a "dumping agreement."

Briefing parliament on Germany's economic outlook for 2014, the leading center-left Social Democrat in Chancellor Angela Merkel's new coalition government said the TTIP could offer chances for new jobs and more business, but not at every price.

"What we must have an interest in is that the free-trade agreement does not lead to a dumping agreement – in no realm," Gabriel said, adding that currently there were concerns that the talks could lead to erosion of historial social welfare gains.

We don't want a new round of blind privatizations," Gabriel said, referring to tasks normally carried out within Germany's extensive public service sector.

Social justice was the guiding principle of economic policy, he said. Wage increases and a planned minimum wage would stimulate private consumption, he forecast.

Replying during Thursday's parliamentary session, opposition Left party spokesperson Sahra Wagenknecht said many of the grand coalition's intended reforms were no more than "hot air" and lacked answers for those senior citizens living in poverty and youth without jobs in Germany.

Referring to the coalition's agreed plan to introduce a minimum wage, she said: "What we need is not a porous 8.50 euros ($14) at some stage in time, but rather we need at long lasting 10 euros per hour, immediately and nationwide," she added.

Gabriel said the country's so-called Social Market Economy was among the best of Germany's historical traditions and the planned minimum wage would protect individuals from slipping into undignified circumstances.

The economic outlook report, adopted by Merkel's cabinet on Wednesday, foresees a new record level of 42.1 million persons in full or part-time employment in Germany and a growth in gross domestic product of 1.8 percent this year.

During Thursday's debate, Greens' party co-leader Anton Hofreiter accused Gabriel of setting false priorities in his parallel role as the minister in charge of Germany's switch to renewable energy sources - from coal and atomic power plants..