At just 31, Sebastian Kurz appears set to become Austria's next chancellor after his People's Party won the most votes in parliamentary elections. The far-right Freedom Party may be key to his government. 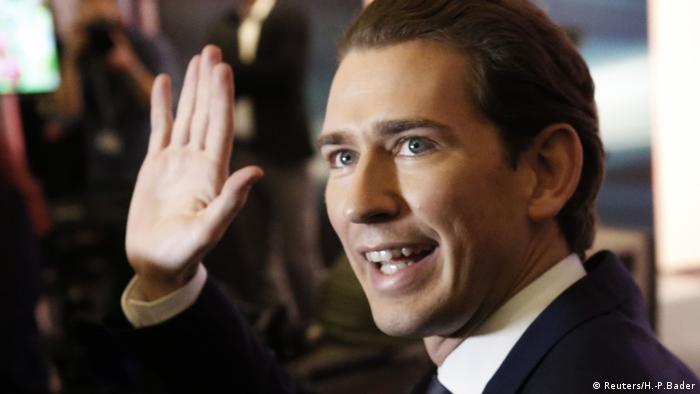 The People's Party (ÖVP) won 31.6 percent of the vote in Sunday's parliamentary elections, marking a major victory for the 31-year-old Kurz, according to the latest vote count by state broadcaster ORF.

If the ÖVP keeps that vote count, they're set to lead parliament with at least 62 seats.

"I can promise you today that I will fight for change in this country with all my power," Kurz told supporters at a rally. "I accept this responsibility with great humility."

The far-right, anti-immigration Austrian Freedom Party (FPÖ) came in third place with 26 percent, amounting to 51 seats, while the center-left Social Democratic Party (SPÖ) managed to garner 26.9 percent, placing them in second with 53 seats.

"It shows that we have arrived at the center of society. We are the ones that dominate the political debate," said FPÖ chief Heinz-Christian Strache.

Kurz suggested he is open to talks with other parties. "I would of course like to form a stable government. If that cannot be done then there are other options," Kurz told ORD.

Finance Minister Hans Jörg Schelling, a member of the ÖVP, told DW that the center-right party - as a whole - is open to talks with both the FPÖ and the Social Democrats. Meanwhile, SPÖ chief Christian Kern said he will stay on as his party's leader despite losing to his government's junior coalition partner.

The New Austrian and Liberal Forum (NEOS) picked up 5.1 percent of the vote, amounting to 10 seats, which remains roughly unchanged from the 2013 election.

The Green Party took a beating, losing 8.5 percent compared to the 2013 election. The Greens managed to garner 3.9 percent of the vote, which isn't enough to make it into parliament.

The Greens' lead candidate Ulrike Lunacek said the election result has been difficult to stomach, describing it as a "heavy defeat and a great disappointment." However, an offshoot party led by former Greens member Peter Pilz managed to gain 4.4 percent of the vote, amounting to 8 seats.

Before the elections, campaigning focused on migration, notably the 2015 migration crisis that polarized European politics.

That year, Austria was used as a gateway for nearly 900,000 migrants making their way to Germany. It also received more than 68,000 applications for asylum in 2015, one of the highest proportions on the continent compared to the population.

While the center-left SPÖ campaigned on a track record of lowering unemployment and of economic growth, Kurz's ÖVP promised to prevent a repeat of 2015's wave of migration and cut access to social welfare benefits for newcomers for at least five years.

In a poll by state broadcaster ORF, 55 percent of respondents that voted for the ÖVP said they did so because of their stance on asylum and integration.

At only 30 years old, Sebastian Kurz is angling not only to become chancellor of Austria, but also to give his country a more powerful stance on the world stage. To that end, he warned against any "meddling" from Turkey. (20.08.2017)

Young heads of state – Sebastian Kurz is not alone

Sebastian Kurz will become the next Austrian chancellor, at the age of just 31. He’ll be one of the youngest ever elected heads of state. DW takes a look at some other young leaders of recent times. (15.10.2017)

Family killed in Israeli airstrike against Syria 8m ago

Google threatens to block Australia from search engine 49m ago