The ruling People's Party has picked the current interior minister to replace Sebastian Kurz as party leader. Karl Nehammer is widely expected to become the next chancellor of Austria. 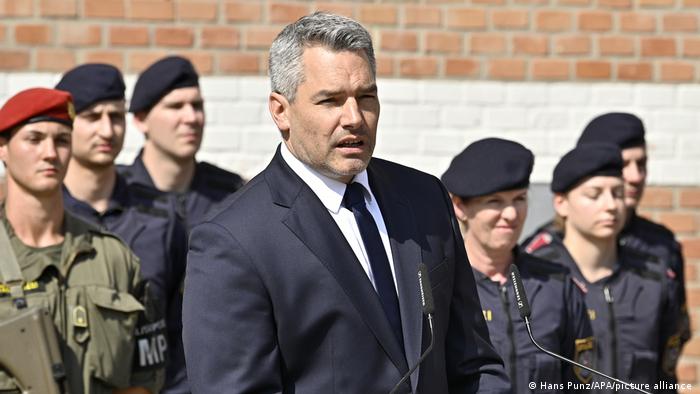 Karl Nehammer is a former soldier and communications advisor

The decision was made at a meeting of the center-right party's top brass in Vienna.

It will now be up to Austria's president to accept Nehammer's nomination and swear him in, but this is mostly a formality.

Why another change at the top of Austrian politics?

Nehammer's appointment comes after a day after the current party chief Sebastian Kurz, who is implicated in a corruption scandal, said he was stepping down from the role.

Kurz's departure had a domino effect, prompting Chancellor Alexander Schallenberg, who was only appointed to the role in October, to offer to quit so that the post of chancellor and head of the party could be held by one person.

Kurz had been Austrian Chancellor between December 2017 and May 2019 and for a second time from January 2020 to October, before being forced to quit over the graft scandal.

Who is Karl Nehammer?

Born in Vienna in 1972, Nehammer worked in the army for several years before becoming a communications advisor.

He was first elected as a representative of the capital Vienna in 2017.

He became interior minister last year when Kurz led the ÖVP into a coalition with the Greens. He is considered a strong supporter of Kurz's tough refugee policy.

He has been one of three public crisis managers during the COVID-19 pandemic, with responsibility for the enforcement of lockdowns and restrictions.

Nehammer also led the government's response to the 2020 Vienna terror attack, a series of shootings that left four people dead, hours before the city was due to enter lockdown.

A serious intelligence failure by officials under his authority meant Austria did not hunt down the perpetrator, a convicted jihadi, who was known to have tried to buy ammunition for an automatic rifle.

While Nehammer admitted that "intolerable mistakes" were made in the handling of intelligence on the jihadis, he blamed his far-right predecessor Herbert Kickl for the state of his ministry.

Under his leadership, the Austrian government filed charges in mid-2020 against a person who had confessed to spying for Turkey’s secret service.

Minutes after his appointment Nehammer said he had chosen party official Magnus Brunner to be the
next finance minister.

Brunner, a junior minister in the environment ministry, will succeed Gernot Bluemel, a close ally of Kurz who announced his retirement.

The current chancellor, Schallenberg, will return to his old job of foreign minister, Nehammer told a news
conference.

The conservative party is currently in a fragile governing coalition with the Greens, whose Vice-Chancellor Werner Kogler made positive comments on Thursday about the possibility of Nehammer becoming chancellor, saying they would be able to work together.

Last week, the country became the first in Europe to order a nationwide lockdown to stem a fresh wave of COVID-19 cases and will introduce mandatory vaccinations early next year.

Kurz's announcement to quit politics came just two months after he resigned as chancellor over the graft probe. But he had remained the leader of the ÖVP.

In early October, prosecutors ordered raids at the chancellery and the finance ministry while investigating allegations that Kurz's inner circle used public money to pay for polls tailored to boost his image.

The scandal effectively ended a spectacular career, which saw him become the world's youngest democratically elected head of government in 2017 at just 31.

Kurz has denied any wrongdoing, saying he hopes to have his day in court to prove his innocence.