Austria inaugurates memorial to Wehrmacht deserters killed by the Nazis

A monument to deserters from the German army during World War II has been unveiled in central Vienna. This follows decades of controversy over recognition and compensation in Austria. 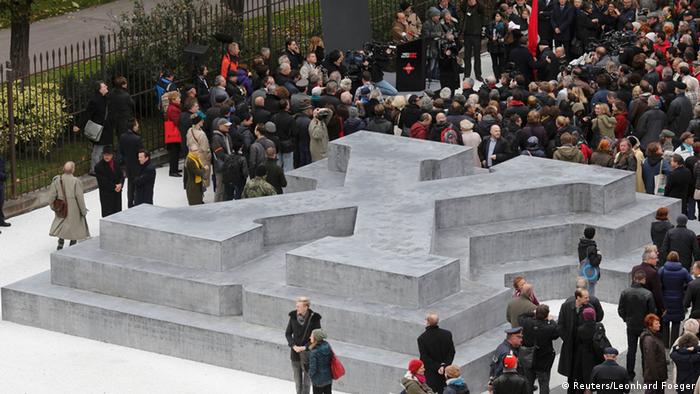 The monument on Ballhausplatz in central Vienna, right by the Chancellery, was unveiled on Friday in the presence of Austrian President Heinz Fischer and representatives of the government and victims' rights groups.

"It is time that our country commemorates those who rose against the orders of the inhuman regime of National Socialism and made their own decision," said the mayor of the Austrian capital, Michael Häupl in his address.

The sculpture was created by the German artist Olaf Nicolai and cost 220,000 euros ($278,000). It is the shape of an X and has the words "all" and "alone" engraved on its gray surface. The X is a symbol of anonymity, the words allude to a poem by the Scottish poet Ian Hamilton Finlay and refer to the resistance of the individual. 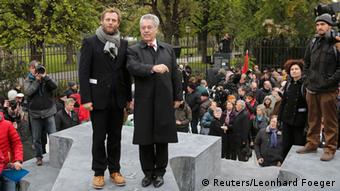 Around 30,000 conscientious objectors and deserters from the German Wehrmacht were sentenced to death by the Nazi military courts from1939 to 1945. An estimated 20,000 of them were executed, including 1,500 Austrian nationals.

For years after the war ended in 1945, the deserters were still stigmatized as "traitors." It took decades to have them rehabilitated.

In 1945, Austria abolished all Nazi judgments against Austrians. However, this still required victims to prove that their offense had been "directed against the Nazi regime or was aimed at the restoration of an independent state of Austria." It was almost impossible for individuals to provide such evidence, and so the judgments were mostly upheld.

Critics accused the Austrian authorities of dragging their feet and blurring the victims' legal status exempting many from compensation or adequate pension payments.

In 2002, the committee "Justice for Victims of Nazi Military Justice" was formed after Austrian Wehrmacht deserter Richard Wadani started lobbying for the rehabilitation of soldiers who had been criminalized by Nazi military courts. Wadani, now 92-years-old, was present at Friday's ceremony.

It took three years for all sentences to be overturned by the Recognition Act and deserters or their progeny granted compensation payments on a complex individual case basis.

But the complete blanket rehabilitation only came into effect in 2009 - amid fierce opposition from Austria's right wing parties.

Only then were all verdicts of the Nazi's People's Court, the state courts and the special courts annulled with an explicit emphasis on resistance fighters and deserters.

Germany coping with the past

In Germany, it was in the 1990s that there were final agreements on the compensation of soldiers who were crimialized by the Nazi military. But here too, the compensation payments were tied to an individual assessment of the deserter's motivation, which after half a century proved to be almost impossible, as court records are missing or contain false testimony before the Nazi military court.

In the past 30 years, several monuments to victims of Nazi military justice have been set up across Germany. The monument in Vienna is the first one in Austria.

A 24-meter (80-foot) glass panel was unveiled in Berlin's Tiergarten on Tuesday, a monument for the roughly 300,000 people deemed "unworthy of life" and killed by the Nazis in their infamous "euthanasia" campaign. (02.09.2014)

January 27 marks Germany's Day of Remembrance for victims of Nazism. The Bundestag has held its annual commemorative ceremony. An Israeli delegation has visited Auschwitz-Birkenau to remember its liberation in 1945. (27.01.2014)