Vienna has lodged a legal complaint over allegations Germany's intelligence services helped the Americans spy on European officials and firms. Chancellor Angela Merkel has defended the BND against wrongdoing. 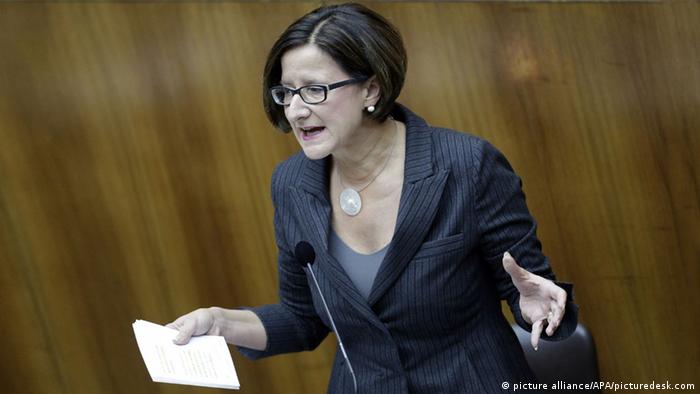 The Austrian government has filed suit due to suspicions that Germany's BND spying agency, in collaboration with the NSA, may have spied on its authorities and companies, said Interior Minster Johanna Mikl-Leitner (pictured above) on Tuesday.

"Austria demands clarification," she said to Reuters news agency, "…today we have filed a legal complaint with the prosecutor's office against an unknown entity due to secret intelligence services to Austria's disadvantage."

Mikl-Leitner added that Austria's security services were in contact with their German counterparts.

German Chancellor Angela Merkel defended her country's intelligence agency on Monday against suggestions that it illegally assisted the US in spying on politicians and companies in Europe, including France's Airbus, the main competitor of America's Boeing aircraft manufacturer.

But the BND affair does not promise to go away quietly and has shown how dangerous it could prove for the "untouchable" Ms. Merkel and her Christian Democrats (CDU). Sigmar Gabriel, the vice-chancellor from coalition partners the Social Democrats (SPD), broke a Berlin taboo on Monday by discussing a personal conversation he had with the chancellor over the matter.

"Both times the answer was no from the chancellor," Gabriel said, emphasizing that he had no reason to suspect she was not answering "correctly."

He hedged his comments, however, by adding that if the allegations turn out to be true, "it would be a big strain of the faith of the economy in governmental behavior."

Gabriel's moved was deemed a "clever" one by analysts - a way to put responsibility on Chancellor Merkel and her CDU as his party continues to trail them in the polls - while stopping short of openly challenging her.

The Green and Left parties have called for official sanctions against those implicated in media reports about a German agency facilitating American espionage. The parties also sought the interior minister's resignation. (03.05.2015)