The Wallabies superstar has been previously warned about his homophobic social media posts. He will now be unable to compete for Australia in the upcoming Rugby World Cup. 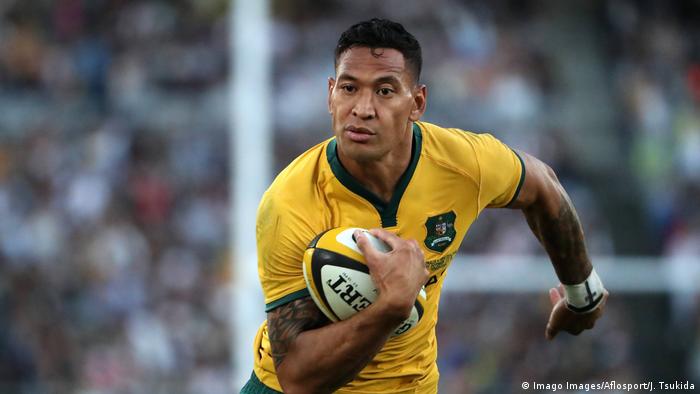 Rugby Australia (RA) has formally begun the process of sacking fullback Israel Folau over an anti-gay rant he left on social media.

"The Rugby Australia Integrity Unit deemed that Folau had committed a high-level breach of the Professional Players' Code of Conduct warranting the termination of his employment contract," RA said in a statement on its website. "Folau has 48 hours to accept the sanction or have the matter referred to a Code of Conduct hearing."

"We appreciate this matter will attract significant interest but due process must be followed," the statement added.

Folau currently plays for the New South Wales Waratahs in Super Rugby, a rugby union competition involving teams from Australia, Argentina, New Zealand, South Africa and Japan. He has won Australian player of the year a record three times, and would have been a key member of his national squad, nicknamed the Wallabies, at the Rugby World Cup in Japan in the fall.

Earlier that day, after Tasmania became the first state in Australia to make gender optional on birth certificates, Folau wrote on Twitter that "the devil has blinded so many people."

A Christian fundamentalist, Folau had previously been warned over a series of homophobic posts. Last year, to the ire of RA's corporate sponsors, Folau wrote on social media that "God's plan for gay people was HELL."

On Sunday, he told the Sydney Morning Herald that it would be "God's will" if he never played rugby again.

"First and foremost, I live for God now," he said. "Whatever He wants me to do, I believe His plans for me are better than whatever I can think. If that's not to continue on playing, so be it."

Out of Rugby World Cup

On Monday, Wallabies coach Michael Cheika said he would not have been able to select Folau after his latest "disrespectful" social media posts, even if the 30-year-old hadn't been sacked.

"We've had the discussion about it after the last time about his right to believe and our support in that," Chieka told reporters. "But getting out in that disrespectful manner publicly is not what our team's about."

Cheika said he felt the need to talk to Falou "about why," but he has not had the opportunity to do so yet.

Police have arrested an All Blacks security guard for planting a listening device in the team’s Sydney hotel room last year. Some Australians, offended by earlier veiled accusations, are now calling for an apology. (08.02.2017)

Throughout Germany, soccer is all-encompassing. But in the town of Heidelberg, nestled between round-ball strongholds Stuttgart and Frankfurt, a forgotten ‘traditional’ sport is slowly trying to change the landscape. (08.02.2017)