Australia's second biggest supermarket chain Coles has again changed its mind on ending free plastic bags for customers. It's a PR disaster and could open the door to greener retailers, including German discounters. 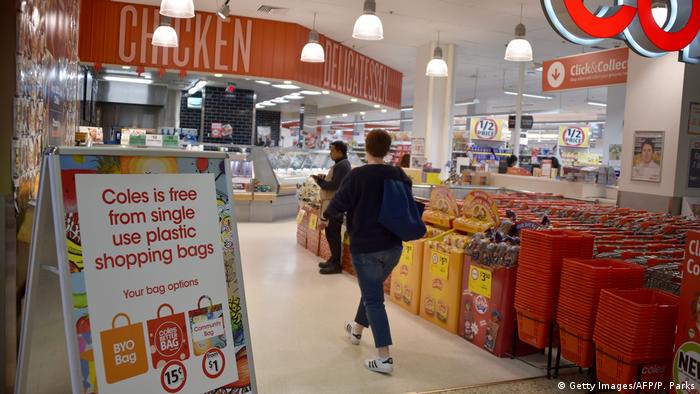 With social media awash in condemnation, Australia's second largest grocery chain Coles on Thursday said its plastic shopping bags would be free to shoppers until August 29.

Coles has been handing out reusable plastic bags to most of its customers since July 1, when it introduced a ban on single-use plastic bags. It had told customers they would be charged 15 Australian cents (€.09, $.11) for the reusable bags as of July 8 and then shifted that deadline to August 1 before the latest flip flop.

"I appreciate this transition phase is taking longer than anticipated, but it is absolutely the right thing to do by our customers," Coles Managing Director John Durkan said in a statement to staff, adding that change in habit had proven to be "big and difficult" for customers.

Four of Australia's eight states and territories had already banned single-use plastic shopping bags by law as of July 1, although New South Wales and Victoria — where over half of Australians live — have resisted the move.

Coles and its larger rival Woolworths account for around 70 percent of the Australian supermarket trade.

"What we have observed is an overwhelming backlash led by shoppers who are disappointed in the inconsistency of Coles' messaging," Terrie-Ann Johnson, managing director of environmental group Clean Up Australia, told DW.

"Coles took a lead by replacing the single-use plastic bag with reusable options — to then allowing the reusable plastic bag to effectively become a single use item because it was free. The feedback to us is that shoppers are confused. As are we!" Johnson added.

According to Clean Up Australia, 5 billion plastic bags are handed out by Australian retailers annually.

The US journal Science said eight million tons of plastic are dumped into the oceans and seas each year, with toxic particles ingested by fish.

"We think this decision shows Australian consumers want action taken on plastic pollution and the massive backlash against Coles, which prompted them to change their minds in less than a day, indicates there is a significant commercial disadvantage to not doing so," Greenpeace campaigner Zoe Deans told DW.

"This is a fantastic outcome and shows exactly what we said yesterday: that Coles had put too much stock in the complaints of a small, but very vocal, minority."

"The back flipping created unrest and skepticism among Australian shoppers," Gary Mortimer, associate professor of marketing at Queensland University of Technology, told DW.

"When the retailer stated they were continuously looking at ways to reduce plastics, then back flipped and continued to offer free reusable plastic bags, shoppers vented their anger on social media," Mortimer said. "This moved the conversation from whether people supported or didn't support the plastic bag ban to the integrity of the message."

"This type of leadership around sustainability and waste reduction, creates unrest and distrust, as shoppers rightly start to question whether the retailer is serious or not about reducing plastics and waste," Mortimer warned.

Australian supermarkets' phasing out single-use plastic bags is just one example of how retailers are engaged in a race to be green. Other examples are dumping plastic straws, buying back used products and reducing unnecessary packaging.

"Rather than competing on price or time, green credentials offer a way for retailers to differentiate themselves. Encouraging customers to make overtly good moves also has a psychological effect, allowing them to excuse poor behavior elsewhere — such as buying a product that may not be ethically sourced," Mortimer adds.

Mortimer warns, however, that a concern for companies is that they might be accused of 'greenwashing' — using marketing to create the perception that their policies, purpose or products are environmentally friendly, when that's not really the case.

Aldi to the forefront?

Will new entrants into Australia's market have an advantage because of reusable bag policies?

"This would be only one element that would affect their likelihood of success," Johnson thinks.

"We are a small market [total population of around 23 million] and already have five supermarket chains across the nation. Success will largely depend on the ability to steal market share. And while I'd love to think that bags would be an influence, I suspect things like product range, accessibility and price will be stronger triggers."

German chain Aldi opened in Australia in 2001 and has grown rapidly, now employing 8,500 staff across 372 stores. It plans to open 25 outlets a year on the eastern seaboard and recently said it would expand for the first time to the states of Western Australia and South Australia, opening a further 120 stores. The German discounter has 7 percent market share, compared with Woolworths' 40 percent and Coles' 30 percent, according to market researcher Ibisworld.

"Australian shoppers have grown accustom to the German discounter model, with Aldi entering the market almost two decades ago. Aldi is now Australia's third largest retailer. With shoppers now conditioned to shop with a discounter, growth will be quick," Mortimer said.