Residents of the eastern Australian city are now subject to a "stage 4" lockdown due to a surge in coronavirus cases. The premier of Victoria state has compared the situation with recent devastating bushfires.

The premier of the eastern Australian state of Victoria, Daniel Andrews, on Sunday said an overnight curfew would be implemented across Melbourne — Australia's second-biggest city — from 8 p.m. to 5 a.m. after he declared a state of disaster in the entire state.

Andrews said 671 new coronavirus cases had been detected in Victoria since Saturday, including seven deaths. The state has seen a steadily increasing toll in both deaths and infections over the past six weeks and currently has 6,322 cases of active infection.

Under the newly imposed "stage four" restrictions, residents of the state capital Melbourne will be allowed to shop and exercise only within 5 kilometers (3 miles) of their homes. Students across the state will return to learning at home.

Only one person from each household will be allowed to shop at a time, and only once a day.

The rest of Victoria will be under stage three restrictions from next Thursday, with restaurants, cafes, bars and gyms closed.

The new measures across the state are to remain in place until at least September 13.

A state of disaster was first called in Victoria during the massive bushfires there six months ago, and Andrews drew parallels between the two situations.

"This is a public health bushfire, but you can't smell the smoke and you can't see the flames. This is very different; it is a wicked enemy," he said. 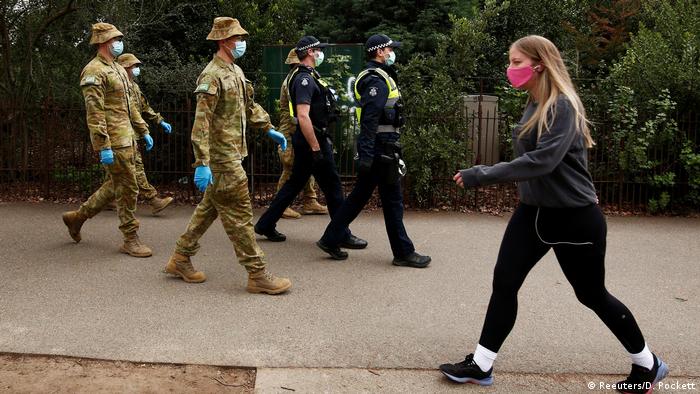 The premier said there would be further announcements on Monday that would likely include the closure of some industrial sectors. The new lockdown measures will last for six weeks.

"These are big steps but they are necessary. We have got to limit the amount of movement and limiting the amount of transmission of this virus," Andrews said.

Under Victoria's Emergency Management Act of 1986, in a state of disaster the state's Emergency Services Minister can "control and restrict entry into, movement within and departure from the disaster area of any part of it," according to public broadcaster ABC.

The act also allows the minister, or the police or emergency services that answer to him or her, to take possession of any property if such a move is deemed necessary under a state of disaster.

The current minister, Lisa Neville, told the ABC that imposing the state of disaster was "not something we take lightly."

Australian officials have reissued stay-at-home orders for the 5 million residents of Melbourne amid a sudden spike in cases of COVID-19 in the area. The border between Australia's most populous states will close.

Coronavirus: Germany to use new antibody-based drug 0m ago