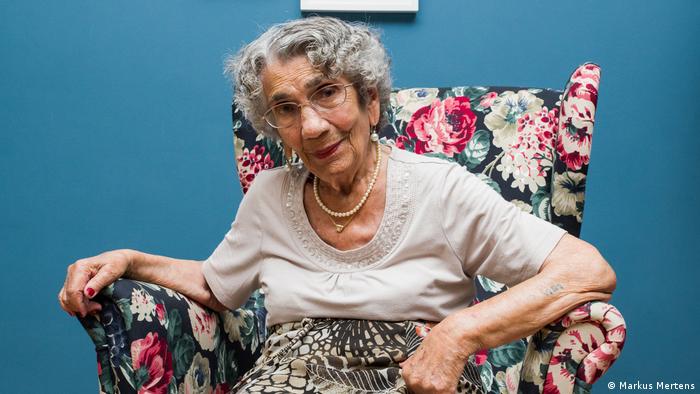 Zilli Schmidt was awarded the Order of Merit by German President Frank-Walter Steinmeier this year.

In September, Schmidt walked into the Kulturhaus RomnoKher in the western German city of Mannheim to attend a reading of her book about her memories as a survivor of the Auschwitz death camp. "Your visit is a gift," said many of the people who had turned out to greet her.

The book is titled God Had Plans for Me: To Keep Alive the Memory of the German Sinti. It recounts her happy childhood days — as well as her incarceration and hunger, the guards shooting at small children and mass murder.

Schmidt told DW that it is her mission to tell what the Nazis did to Sinti, a Roma population in Europe. "They were all gassed, my entire family, all my people," she said. She added that the murder of Roma is often left out of stories of the Holocaust: "The Jews were all sent to the gas chambers. And all the Sinti are still alive?" She pauses. "Nobody was still alive," she said.

The first time she spoke in public about her life was August 2, 2018, at a service for murdered Roma at the memorial in Berlin: "I spoke only for my own people." She was pleased to see so many young people there. "Young people were never told," she said. "It wasn't taught at school."

'I dream that I am back in Auschwitz'

Remembering is not easy, Schmidt said: "I often have the urge to cry but I don't show it. I swallow my feelings." But the memories torment her. "When I dream," she said, "I dream that I am back in Auschwitz."

Schmidt's daughter, Gretel, would be 80 years old if she were alive today. She could have grandchildren and great-grandchildren. But Gretel, her little girl, "did not grow up." In the camp, the girl saw the chimneys of the crematorium: "Mama, they are burning people over there." Zilli told her daughter that this was not true: "No, they are just baking bread." 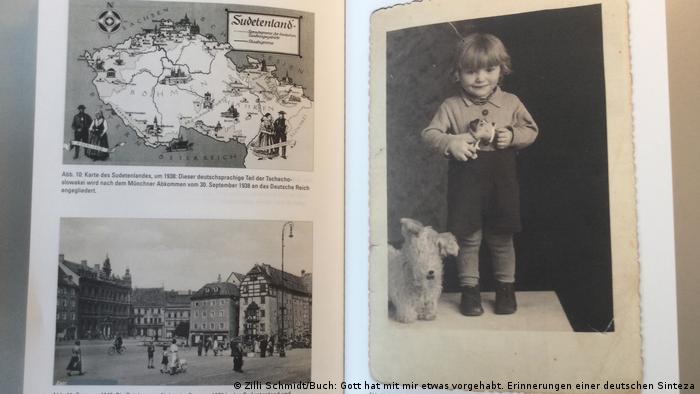 Zilli has only one foto of her daughter, Gretel, who was murdered at age 4

Gretel's life ended when she was four years and three months old. Murdered on August 2, 1944, in the gas chambers of Auschwitz-Birkenau, just like Zilli's parents, her sister Guki and her six children, when the Nazi SS paramilitaries decided to liquidate so-called gypsy families. On this night alone, the SS murdered about 4,300 screaming and crying people. It was one of the darkest episodes in the Romani genocide, known as the Porajmos.

Like other young concentration camp inmates deemed "fit to work," the 20-year-old was moved to a different camp before that night of murder. Her father wanted to protect Gretel and kept the girl close. When her young mother tried to run toward her family, SS doctor Josef Mengele slapped her and forced her back into the wagon. "He saved my life but did me no favor in the process." In the concentration camp at Ravensbrück, she was told what had been done to her family. She collapsed, screaming.

Schmidt was born Cäcilie Reichmann in 1924 in Thuringia, to a family of traveling performers who entertained people with their mobile cinema and music. "We were a happy family," she says in her book. The caravan that housed the Reichmanns on their summer tours was built by her father: "A real treasure," with the stove decorated with different images of birds and Meissen porcelain in the cupboard. Her brother bought and sold violins, while she and her mother went from door to door selling the finest lace.

She and her little brother Hesso went to school wherever they stopped along the way. In the winter, they went to the same school for months on end, in Thuringia or Bavaria. The teachers would send them to the back of the class. Sometimes fellow pupils would chase and taunt them. "Gypsies, gypsies," chants Schmidt 90 years later, as she recalls the jibes. As a child, she would defend herself with her fists. When the National Socialists seized power in 1933, her father still felt safe: "They're only arresting criminals." He had done nothing wrong and believed he had nothing to fear. World War II began in 1939. Schmidt's big brother, Stifto, served in the Wehrmacht, in Russia and France. But the Nazi regime had no interest in just rewards. It was focused on its murderous and racist ideology.

With some relatives already deported to the Buchenwald concentration camp, the Reichmann family went on the road, traveling across Germany to France to stay one step ahead of the authorities. But they caught up with them: Zilli and her cousins were arrested in Strasbourg. "Crime: gypsy" read the police file.

Schmidt was sent from jail to jail but managed to escape from the camp at Lety in the then German Protectorate of Bohemia and Moravia, in what is now the Czech Republic. But she was rearrested shortly afterward. 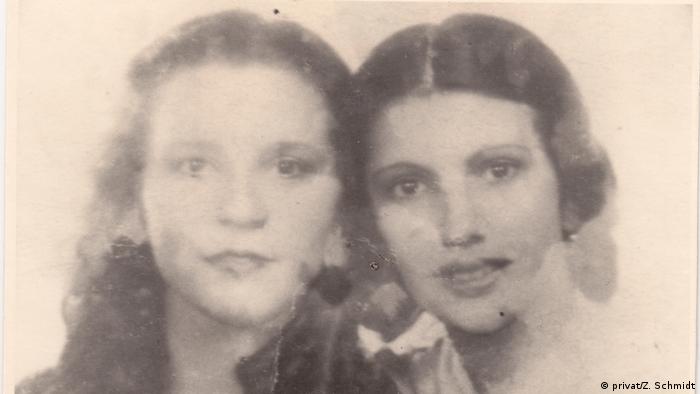 In March 1943, she was deported to Auschwitz, where an inmate tattooed the number Z1959 on her forearm. She was the first of the Reichmann family to end up in Auschwitz-Birkenau, in the "Gypsy family camp." Hunger, thirst, disease, violence and death were part of everyday life there. Schmidt said she stole to help keep the children and others alive — potatoes from the kitchen, boots from the clothing stores. Each time, she knew she was risking her life.

Twice, her name was on the list for the gas chamber. Yet twice, she escaped, she said. She survived three days of captivity in a cell with room only to stand. Three days with neither food nor water, nor a toilet. "While I was inside, I thought 'Screw you. When I get out, I'm going to keep stealing.'"

One time, she said, a sentry shot at her and only narrowly missed. Later, she and her cousin Tilla were able to escape again, from a satellite camp. She survived the war against all odds. "God helped me, I would never have managed alone," Schmidt said. "I'm still here for a reason." She is one of the last eyewitnesses.

After the war, she suffered from depression. At first, her medication worked and she built a new life. Then came a sense of guilt for having survived when her loved ones were murdered. She and her husband Toni Schmidt, also a concentration camp survivor, applied in Munich for compensation for the time they were incarcerated in concentration camps.

After years fighting red tape and bureaucratic dead ends, Schmidt received a small amount of money: "But I was glad to get it. We were totally impoverished after the camps." It took until 1982 for the German government to acknowledge the racial persecution of Romani people.

The Mannheim reading was attended by many young Romani women, who were visibly moved by Schmidt's story. 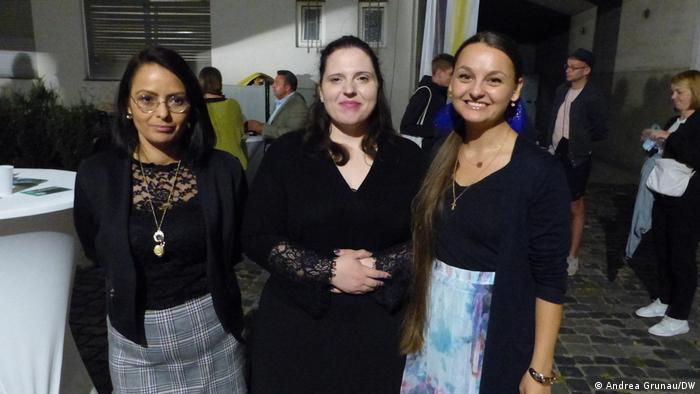 Christina Schumacher was born in Siberia, Russia. She came to Germany with her parents. Verena Lehmann's grandmother was in Auschwitz. Verena herself spoke at the memorial in Berlin on August 2, 2020: "We children learned at an early age what a concentration camp is and what a Nazi is. I was especially terrified of Hitler." This was years after the war and the death of the dictator — the trauma of persecution will go from generation to generation, she says.

Many members of Romani communities hide their identity for fear of discrimination. Victoria Gross is a nursery school teacher. When an acquaintance took part in protests against the accommodation of a Sinti family in their building, she told her that she, too, belonged to the minority group. "That information is doing the rounds now," she said. Her daughter was no longer invited to birthday parties. "She was in tears." Her 10-year-old daughter asks: "Why did you tell them?"

Gross said hiding was not a solution. Her recipe is to promote networking in the minority community, encouraging mutual support and educating people. That, she said, is the reason why she does youth work.

Schmidt has lived through nearly a century of discrimination and alienation because she belongs to the ethnic minority of the German Sinti. "Dear children, you must stay strong," she urges. "The Hitlers are still agitating; they cannot be silenced."

The 96-year continued: "I want to be informed about what is going on in the world. I see it all on TV  —  that even the police have been infiltrated by Nazis." Schmidt still experiences fear. She fears the new breed of Nazi. "If they found out where I live," she said, "they would kill me."

It was updated and republished.

A new digital archive of the Roma reflects diverse cultures

The Roma have contributed to European cultural history in unexpected ways. The new RomArchive is designed to raise awareness of Romani cultures and arts — and aims to counter stereotypical presentations.